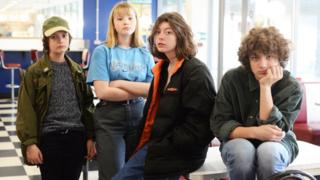 A high school band whose drummer is 13-years-old say it is “surreal” to have their latest single added to the BBC 6 Music playlist.

Anorak Patch, based in Colchester, will have their track 6 Week Party played across the network this week.

It follows on from the success of their debut single, Beans, which received airplay on 6 Music and Radio 1.

She added: “It feels very odd to hear someone who you’re used to playing such good music, play your music.”

Beans, a quirky indie pop song reminiscent of early Blur, was picked up by national radio stations in January after it had been championed by BBC Introducing in Suffolk.

A long list of gigs and festival appearances had been lined up on the back of this, but then came the enforced lockdown.

“It was very annoying to have all our gigs cancelled, as we were looking forward to them,” said Effie.

Coronavirus: Live updates from across the East of England

But the band kept in regular contact during the lockdown and are now rehearsing together again.

“The lockdown and being apart showed us how important it is that we are all together, and making music that we like.”

The band hope to return to the studio shortly to record some new songs, one of which was written during the lockdown.

They are optimistic that gigs penned in for towards the end of the year will go ahead, especially as they have had to work hard to find venues and promoters who will host musicians who are too young to serve alcohol to.

“With us all being under 18 it’s hard to play a lot of venues, especially around Colchester,” Eleanor said.

“There are some excellent venues but having a 13-year-old drummer does have some consequences.”

Anorak Patch are due to play Sound City Ipswich in October

Effie and Oscar, middle, are in year 11 and have had their exams cancelled

Luca started playing guitar when he was just four but switched to drums so he “didn’t have to stand up”.

He said the attention on his age did not bother him.

“It’s good to show what young people can do – it puts me in a different light because people think we’re not good because we’re young, especially me, and they’re flabbergasted when they see us.”