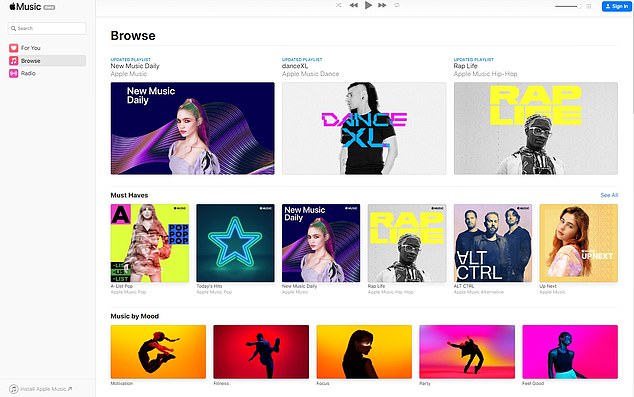 Apple Music comes to web browsers for the first time: Firm launches public beta site for its streaming serviceApple’s browser-based Apple Music launched today at beta.music.apple.comSubscribers will have access to their songs and the site’s features by logging inThe move comes after Apple announced in June that it’s killing off the iTunes app

By Cheyenne Macdonald For Dailymail.com

Apple is rolling out a web version of its popular music streaming service for the first time.

The company launched a public beta for a browser-based Apple Music, allowing users to stream without downloading any apps.

Only subscribers will have full access to full songs and features of the site, though users who don’t log-in will still be able to listen to previews, according to Apple Insider.

Apple introduced the beta web version of Apple Music to the public today.

It so far mostly offers just the basics, giving users access to tabs such as For You, Browse, and Radio, though that’s likely to change as it continues to develop and incorporate feedback.

The move comes months after Apple revealed at its annual developer conference that it would be killing off iTunes with the upcoming MacOS, Catalina.

When the update comes this fall, the music library will shift to the new Apple Music app for Mac.

This will still give users access to their playlists and downloads, the firm explained at the time.

‘Users will have access to their entire music library, whether they downloaded the songs, purchased them or ripped them from a CD,’ Apple said in a release after rolling out the new software.

The iTunes Music store, however, will still exist, albeit in a sidebar in the Apple Music app.

While many were at first concerned about what the changes would mean for their existing music collections, Apple insists the files won’t be list, just re-organized.

In addition, audio books and podcasts will be moved to Apple Podcast and video will be stored in the Apple TV app.

The firm also promised the new system will include ‘all the features you’d expect from iTunes, all while being blazingly fast.’