Celebrating songwriters, composers and music publishers, the awards are now in their 38th year but in 2020 – like so many other aspects of life – the whole shebang was shifted online. It got off to a wonky start, delayed by almost 20 minutes. It’s the music industry; things don’t always start on time.

Country music star Troy Cassar-Daly was a surprise winner of the most performed rock work for his collaboration with Jimmy Barnes on Shutting Down Our Town – remember, these awards are about who wrote the song.

“Who would’ve thought an old country hack like me could win an award like that,” said a beaming Cassar-Daly in a pre-recorded speech. “So thrilled. I’m more thrilled to have written a song for Jimmy Barnes … it makes me more proud of any award that I have won in a long long time.”

John Butler, who won the blues and roots category for his song Just Call, performed with Mama Kin from their home in Fremantle. Their interpretation of Guy Sebastian’s Song of the Year nominee Choir struck a wonderful balance between being at home, like the viewers, and putting a brilliant new spin on a hugely popular song.

Sebastian, like a handful of other nominees, including 5 Seconds of Summer and musical director Kate Miller-Heidke, did some snappy pieces to camera, but the big winners and live performances shone brightest.

Tones and I, whose smash hit Dance Monkey went on to win Song of the Year, also collected the Breakthrough Songwriter of the Year. A jaw-dropping interpretation of Dance Monkey by New York-based Melbourne artist The Dawn Of May was a highlight of the show.

“Song of the Year, that’s really huge,” said Tones and I, whose real name is Toni Watson, from underneath her familiar cap, her bright orange hair flowing. “This song has really grown for me and really helped build my career and I just want to say thank you for the recognition.”

After all the recognition Dance Monkey has brought Tones and I, it was her touching story about performing the track to a group of excited diners in Byron Bay – the day after she first wrote the song – that provided one of the most up close and personal moments of these memorable, far-flung awards. 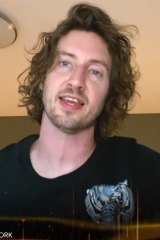 Dean Lewis was among the APRA winners who delivered a socially distant acceptance speech on Monday night. The singer and songwriter from Sydney won Most Performed Pop Work for his song 7 Minutes.Credit:

South Australia’s groundbreaking Hilltop Hoods made a couple of socially distant appearances, winning Most Performed Urban Work for their track Leave Me Lonely and the Songwriter of the Year award.

APRA has a proud tradition of celebrating in style and in challenging times, live (albeit pre-recorded) performances by Kira Puru and Mo’Ju, William Crighton, and Nikka Costa with Justin Stanley were likely viewed by the largest audience in the event’s history. It was a global reach for tremendous homegrown talent.