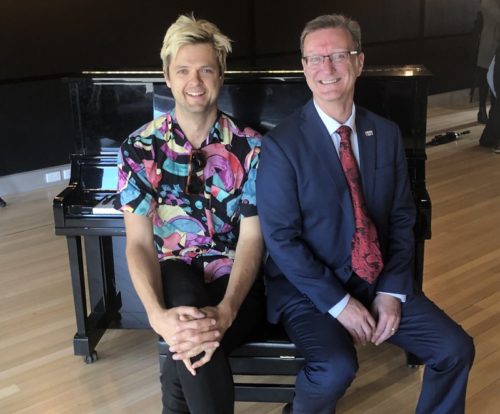 IN the second round of 2019 “Arts Activities Funding”, Arts Minister Gordon Ramsay has today (October 17) announced a further $324,000 of grants.

After drawing attention to what he called “the breadth of creativity, talent and opportunity in the Canberra arts sector”, the minister singled out several recipients for special comment, including polymath entertainer/muso Chris Endrey, who received $12,254 funding for his annual suburban song competition, “Canbeurovision”.

He also noted that Canberra talent would be showcased in Spain when composer, conductor and guitarist Marian Budos presents the world premiere of his Book-Concerto for guitar and orchestra based on Jaume Cabré’s novel “Confessions”.

Other notable grants include $40,000 Harris Hobbs to support Canberra artists to participating in their next curated public art biennial, “Contour 556”, to take place on the Lake foreshore  from October 9 to 30 next year.

As well, choreographer and 2017 “Canberra CityNews” Artist of the Year, Liz Lea, will receive $46,750 to create a new cross cultural dance work, “The Point”.

The next funding round opens at arts.act.gov.au on December 1.

The full list of funding recipients in the current round is as follows:

ART MONTHLY AUSTRALIA was given $14,500 to mentor, publish and promote ACT writers and artists in its Art Monthly magazine.

MARIAN BUDOS was given $46,762 for its world premiere in Spain of a “Book-Concerto” for guitar and orchestra based on Jaume Cabré’s novel “Confessions”.

HANNA CORMICK was given $37,658 for the creative development of “Zebracorn”, a physical theatre work on disability.

CHRIS ENDREY was given $12,254 to present “Canbeurovision” at the Canberra Theatre Centre.

HARRIS HOBBS was given $40,000to support Canberra artists to participate in the Contour 556 public art biennial.

LIZ LEA was given $46,750 to create a new cross cultural dance work title “The Point”.

HELEN MACHALIAS was given $14,485 for her creative development of a new theatre work titled “Careful He Might Hear You”.

HAYLEY McQUIRE was given $15,118 to develop “Blak Motherhood Podcast”, which is about Aboriginal and Torres Strait Islander experiences of motherhood.

SAMUEL MOYNIHAN was given $9578 for the creative development of a new theatre work on “perceptions of normal”.

SARAH RICE was given $24,775 for creating “Text/ure”, a cross media, interdisciplinary project through poetry, visual art and music.

DYLAN VAN DEN BERG was given $43,051 for the presentation of a new indigenous theatre work tiled “Milk”.

VENDULKA WICHTA was given $19,301 to write and produce an EP of new songs with producer Xavier Dunn.