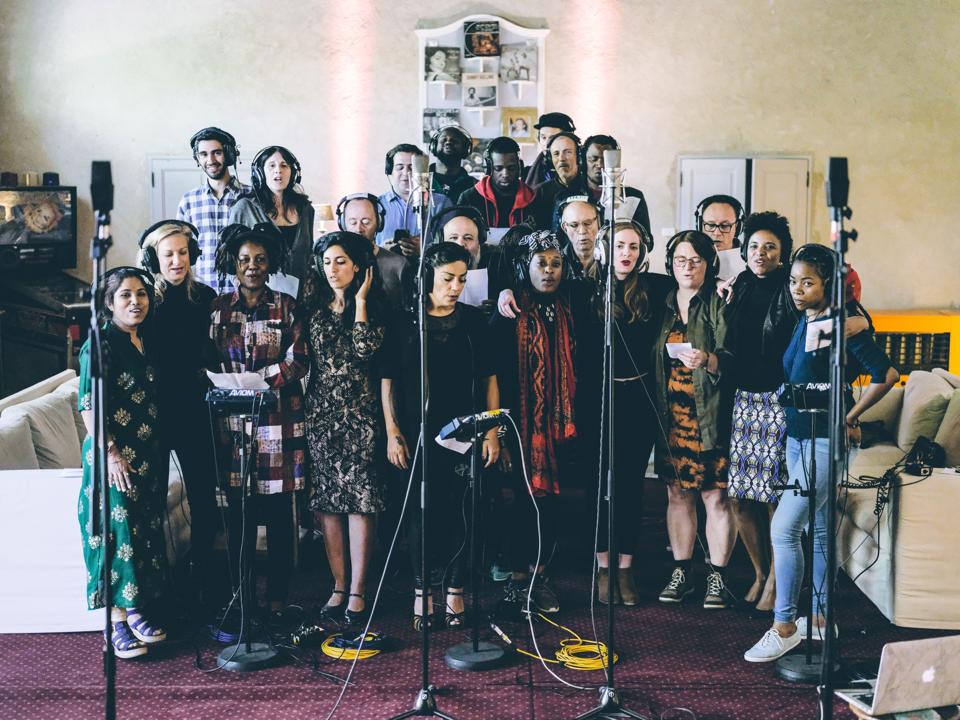 “Same Sky: Beyond Music Volume 1,” is a wonderful collection of inspiring new music, the product of a collaboration between artists from all over the world, all produced by the project’s artistic director, Los Angeles native, Grammy-award-winning producer and legendary musician in his own right, Larry Klein.

Beyond Music Artists Recording “We are One”

First things first: To explain how the Beyond Music Project came about, we have to begin with its patrons, Beati and Regula Curti, a Swiss couple who believe passionately that music can bring people together and change the world. Having found success in entrepreneurial projects they founded The Beyond Foundation, a non-profit  whose mission is, as Regula Curti told one interviewer, “supporting causes that unite cultures in the world through music to create cross culture understanding, awareness, dialog and respect.”

Curti, who hails from a musical family, and is a musician, vocalist, composer and lyricist herself, had a strong belief in the spiritual power of music. Her first music project, “Beyond,” explored Buddhist and Christian chants, with Curti, Tina Turner and Dechen Shak-Dagsay, and was enormously popular. This was followed by “Children Beyond,” Love Within Beyond,” and “Awakening Beyond,” (a recording which featured six women from US, Syria, Switzerland, Nepal, Israel and Syria, raising their voices together).

In 2018, the Beyond Foundation launched “Beyond Music” whose motto  is: “Beyond right and wrong, there is a field, I meet you there,” which speaks to music uniting people from countries in conflict to promote cultural understanding.

With Beyond Music, the Beyond Foundation established an invite-only online collaborative platform for musicians, composers and vocalists. The Foundation then enlisted a group of “celebrity ambassadors” – select musicians, music producers and music executives, such as Tina Turner, Idan Raichel, Billy Childs, Ivan Lins, Mari Boine and Amel Brahim-Djelloul.  These ambassadors, in turn, invited artists to join the platform and collaborate with other artists they found there. The plan is to increase the ambassadors in all parts of the globe in order to enlist the greatest possibility of diversity among the contributors, geographically and artistically.

The artists on the platform create a profile about themselves, and can submit songs, or music samples. They can invite other artists on the site to collaborate with them – on composing, writing lyrics or performing on their tracks. As part of this initiative the Foundation also established an annual competition among the collaborators on the platform to submit completed songs for an album to be record and produced by a selected artistic director, who for the first year’s project was Larry Klein.

From more than 110 submissions, Curti, Klein and the project’s executive director chose a dozen or so collaborations. The artists were then invited to spend two weeks at La Fabrique, a residential recording studio set up in a 19th Century farm in the South of France. 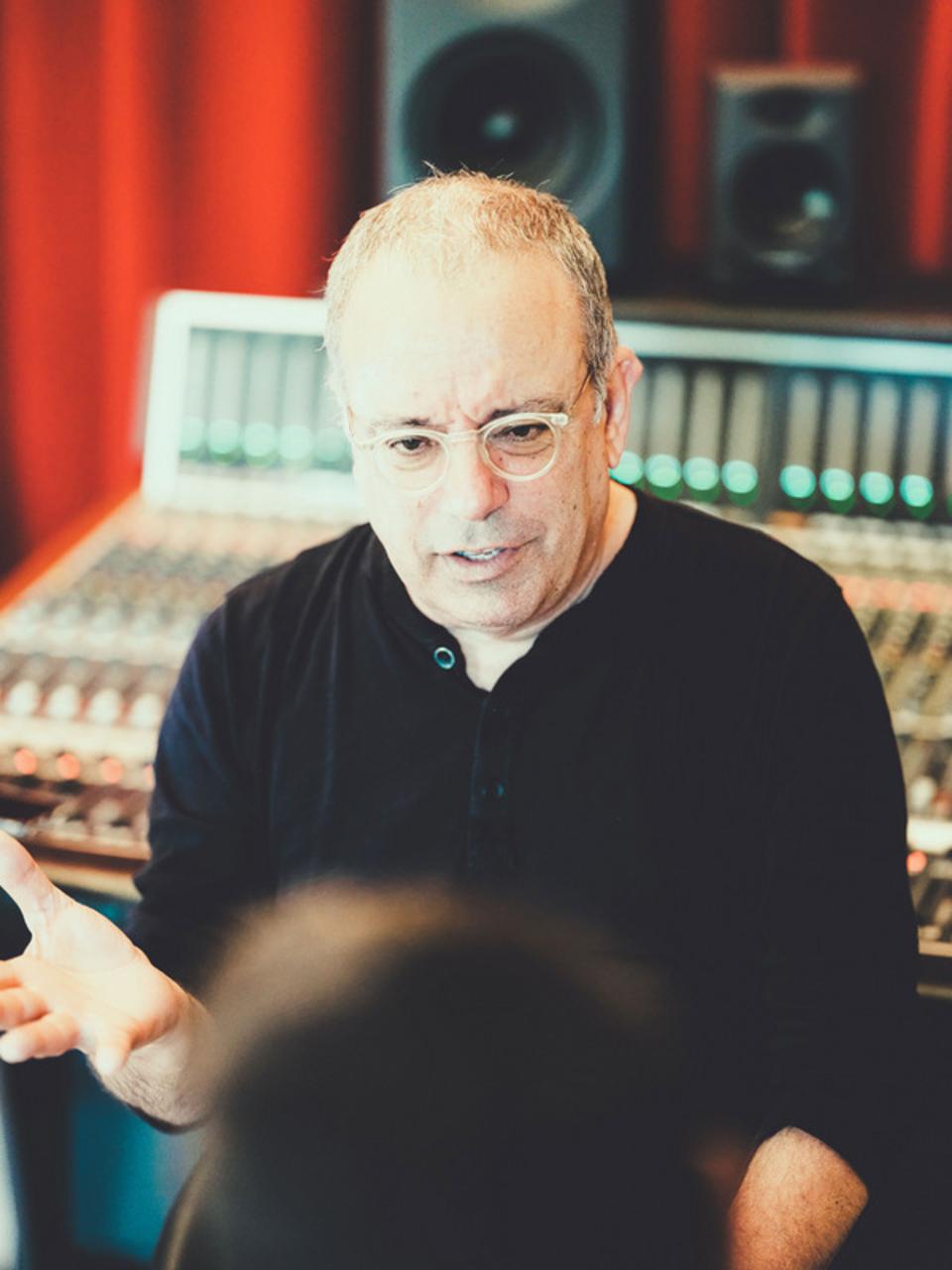 Klein assembled an A list back up band for the studio recordings including Dean Parks, Ed Harcourt, Adrian Utley, Manu Katché, Clive Deamer and Dan Lutz, and Swiss flutist Sandro Friedrich. He then arranged, coordinated and produced the sessions that resulted in ”Same Sky,” a 13-track album that features 23 artists from 17 countries. The musicians were encouraged to create works that addressed contemporary world issues but addressed them through their own collaboration and artistry.

So, for example, the album opens with “Water” written by Kazakh composer Eduard Glumov (who currently lives in Amman, Jordan) and American Kate Nothrop, with lead vocals by Congolese singing star Sheryl Gambo, a rousing uplifting tune that addresses the Water crisis and features musicians from Congo, Kazakhstan, Switzerland and the United States – that to these ears resonates with African rhythms that call to mind Ladysmith Black Mombazo as much as Peter Gabriel. Gambo also appears on another Glumov and Northrop tune, “More of Us,” that mixes a jazzier vocal with a rousing chorus that has an African beat.

“Ma Ding Wo Avale One,” (You are beautiful as you are) is a smoother jazzier tune that would feel at home in Sade’s world. Sung and co-composed by Danielle Eog Makedah, a jazz singer from Cameroon, it is a song she wrote for her daughter who was born with physical and mental disabilities. Another track, “El Clavel Del Aire”(Carnation in the Air) complements mournful South American Spanish vocals with East African accents for a truly unique and compelling emotionally propulsive song.

”You’ve changed me,” is a heartfelt ballad, composed and written by American Heather Bond and Ingrid White from Cameroon, sung by White in French and in English. White is also the vocalist on “Better Together,” that is sung, rapped, and vocalized, in song that mixes and layers a variety of musical styles showcasing the talents of co-composer Max Keller, an 18 year old Swiss musician and beat maker.

Bond is herself the vocalist for “Different, you and I,” a beautiful, simple singer-songwriter tune that one could easily imagine at home on American radio (and in American homes). On “Same Sky,” Bond really establishes herself as the Sara Bareilles of the group, particularly in “Upon the Horizon,” composed and written by Bond and Sasha Slain.

Saa’t Arahman is a traditional Yemenite wedding song, arranged by Israelis Mor Kabasi and Moshe Elamkias, that mixes Arab rhythms in an emotional delivery by Kabasi, a well known Sephardic singer, that pierces one with its emotion.

The album closes with “We Are One,” written by Larry Klein and David Baerwald, an anthem that recalls “Will the Circle Be Unbroken,” that brings together all the artists in the project.

Klein told me that the experience of working with these musicians was life-changing both for him and, he believes, for them as well. He believes the collaborations among them will continue and that he will continue to work with many of these artists on various projects going forward.

I will leave the last word to Regula Curti, who said of Same Sky, “The musicians have expressed with their songs what their wish is for a better life together in this world.” And that is indeed something worth listening to.

To find out more about “Same Sky,” or learn more about the BEYOND MUSIC PROJECT, the artists involved, and the songs you can go to: https://www.beyondmusicproject.org