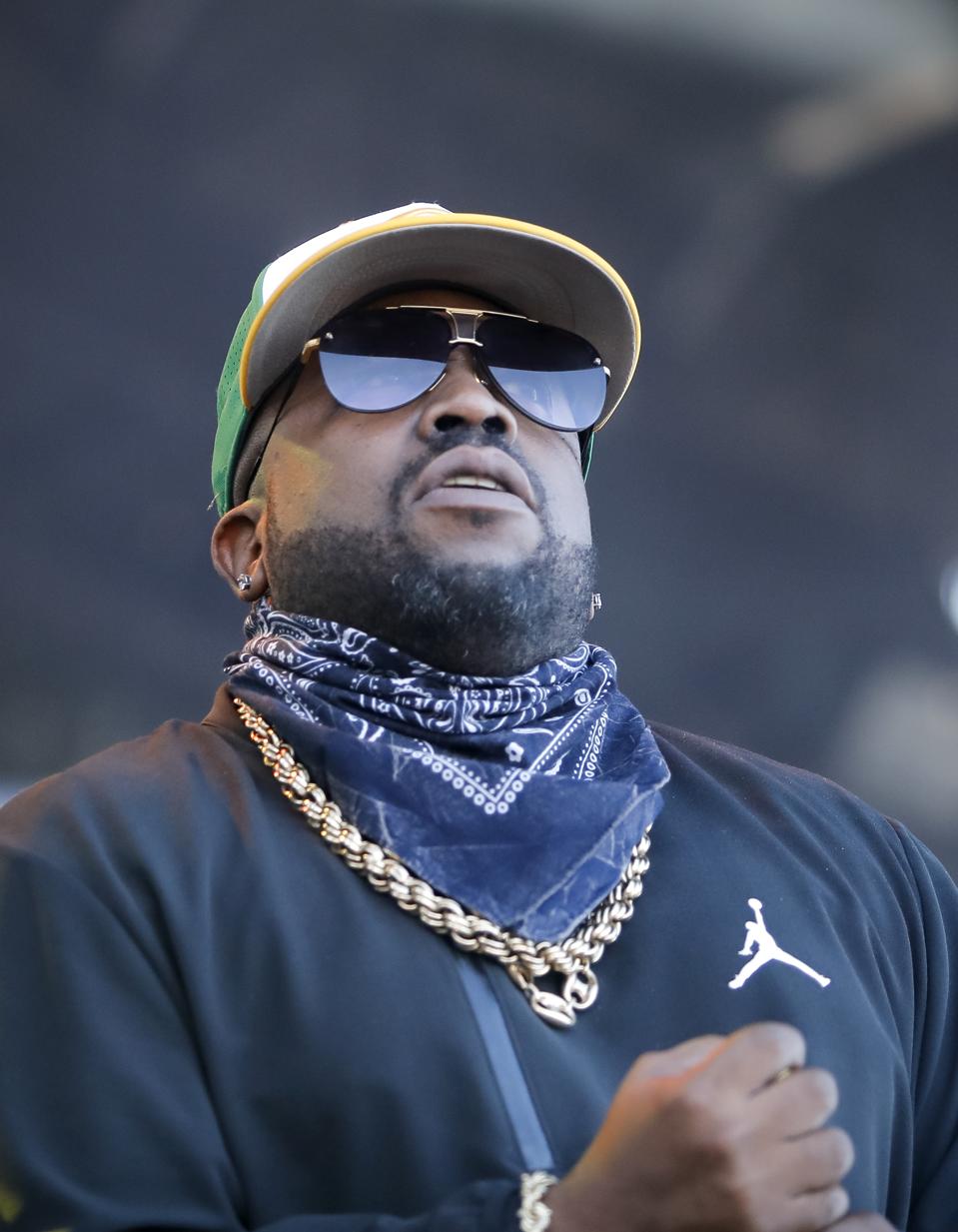 I was speaking with Nick Hexum of 311 last year about the band’s cannabis endeavors and he pointed out an obvious., but still mind-blowing fact, there are now more dispensaries than record stores. So the cannabis products were necessary to keep the band logo out there.

Artists in 2019 have to be creative in how they promote new music. So when Budweiser came to Big Boi of Outkast and offered him his own “Tall BoI” cans, the rap icon jumped at the chance. Though it is a great opportunity to promote his new album, Big Sleepover, with Sleepy Brown, and their Billboard hit single, “Intentions,” with Cee Lo Green, the cans have a much deeper meaning to him, as they pay tribute to his father. as he explained in this interview on the partnership.

Steve Baltin: Where are you today?

Big Boi: In my big house on the hill sitting at my pool house drinking a Frappuccino.

Baltin: What about the Budweiser “Tall Boi” spoke to you and what excited you about the opportunity?

Big Boi: It was an iconic brand partnered with another iconic brand. Budweiser, there’s something that I grew up with as a little kid for my dad and my uncles and my granddads drinking these beers, these tall boys. To have them renamed “Big Boi” was just, oh my God, you know what I mean? I grew up with it and to have my father’s name on the can as well as my picture and lyrics from my songs. The world renowned ATLien original, an ode to Atlanta. It’s so Atlanta.

Baltin: Obviously, in terms of getting the name out there, like you said, Budweiser is such a brand name. Talk about for you as an artist, the opportunity to have it out there in a different way and work with someone as iconic as Budweiser.

Big Boi: To put me on the can is like you trap the can out. They trap the can out. You make it so Atlanta, to the point is that it’s an ATLien can with that iconic Budweiser brand. Even for me to have on the ATL cap, my images is on the can. My face is on the Budweiser Big Boi. It pays homage to everything that is Atlanta. I just couldn’t say no.

Baltin: What does it mean to have your dad’s name on the can?

Big Boi: Chico Dusty is my father who was in the Marine Corps. My album, Sir Lucious Left Foot: The Son of Chico Dusty was a nod to him and dedication to him. To have his name by my face on a Budweiser can is something that, when I was a kid to put me to sleep, dad would make, put the can to my mouth and stuff like that.

Baltin Talk about getting to pay homage to your dad like that. Grammy’s, hit records, things like that are cool. I imagine for you that despite all the other success, being able to pay tribute to your dad in a way that meant something to him, that probably means as much to you as any award you’ve ever gotten.

Big Boi: Absolutely, that’s deep. You hit the nail on the head. It was something from my childhood. To see it morphed into this and it being such a big deal. My uncles and I’ve showed them the can and they’re like, “Holy s**t Boi! Boi, you just don’t stop, do you?” Just thinking my dad was here to see it. I know he’s seeing from heaven because he’s my angel on the other side. Just to be proud and just really showcasing that his boy’s still out here killing shit.

Baltin: It says, “Cooler than a polar bear’s toenails.” Has this been measured scientifically? Have you measured it?

Big Boi: Absolutely. That’s one of my favorite bars of all time from the song “ATLien.” This whole Budweiser Big Boi thing is cooler than a polar bear’s toenails. It can’t get no cooler than this, man.

Big Boi: It was actually an organic connection. We started working on the new album, me and Sleepy Brown Big Sleepover. As a matter of fact, our single came out like three weeks ago and we just cracked the Billboard Hot 100 with our first single called “Intentions” features Cee Lo Green. I’m blessed and highly favored so things just go my way and just to have the song come out and this Budweiser co-brand and cooperation thing I’ve done with them was in the making back since February. I’m blessed man and I’m happy that we have all avenues to put your face out there and let people know what’s happening to keep you on people’s minds and they know it. Right now we ain’t really trying to prove nothing. We just want to uplift people with these positive vibrations and this great music, man. It’s working on all avenues.

Baltin: Every artist now has creative outlets beyond music. For you talk about how doing these  partnerships feed into the music but then also allow you to do other creative things as well.

Big Boi: Yeah that’s the thing about these strategic partnerships. It’s all about strategy. To be in the marketplace, a little bit of everywhere. I just finished a couple of movie roles. I did Berry Gordy in the El DeBarge movie and also just did a role in the new Creepshow series that just came out maybe two weeks ago from the iconic ’80s horror series. I was a fan of that and I got a chance to play a part in one of the episodes, which was dope. To be on TV and be on the radio, have a strong social media presence and just to be out here, rocking shows and touching people, shaking hands, kissing babies. It’s a good thing, man. My life has gone really well. My kids are in college now. Me and my wife are newly empty nesters. There’s a lot of free time and a lot of creativity that’s gone on and it’s pretty strong in my household.

Baltin: Did you talk to Berry himself about doing the role?

Big Boi: No, I didn’t talk to him. But he spoke to me through the producers and he wanted to be portrayed as straight-laced and I was a little gangster and in the scene I want you to see they had to take out of the movie cause it was a little too gangster. It was a good experience. And just to play a mogul like that; a guy who signs such great artists and me, myself being in the same range, signing artists like Janelle Monae and Killer Mike and bringing them to the world. It wasn’t a far stretch and also from coming up under L.A. Reid. him being my guide and we studied him for the past 20 years and being in a partnership with him, I just had to put my mogul hat on.

Big Boi: It was like a bootcamp in a sense. He ran his label, it was all about first talent, then it was about artist development and this day and age you don’t have a lot of artist development and they need to bring that back. From vocal training to media training and things like that. With artists he took pride into building that are to be big brands. All that all that comes from the ground up and he had a great company.

Baltin: What would be the one thing from playing Berry Gordy that you would want to take to working with your artists?

Big Boi: It’s all about originality. That’s what I tell all artists, to be your own thing. To have your own group. It comes from a foundation, of what I’m from, Outkast always being apart from the norm. Always going to the beat of your own drum. You find yourself as the music comes out, a hell of a lot more, to me, unique when you are honest and truthful and can really compose feeling in the music. People can feel where you’re coming from and then people live by your music.

Baltin: I know you’re doing, this will tie in, but you’re doing the fan event in Atlanta, November 9. When you think about the fan event and then more important, going into 2020 and touring the record with Sleepy and all that, are there a couple songs that you are particularly excited to bring to the stage?

Big Boi: Absolutely. Like from this record right here, we have some cuts, they’re top secret right now I don’t want to disclose the names, but “Intentions” is just a groove. It’s that Friday night feeling of going out. There are also other records on this album that talk about a little bit of everything and people are going to get more drips and drops of that in the coming weeks. Once we push this song up the tracks to number one. We just deliver all day long. Big Sleepover.

Baltin: What  are the perfect songs, whether yours or someone else’s, to sip Bud with, out of the Big Boi cans?

Big Boi: “Buffalo Soldier,” by Bob Marley.  and Michael McDonald and Patti Labelle, “On My Own.”