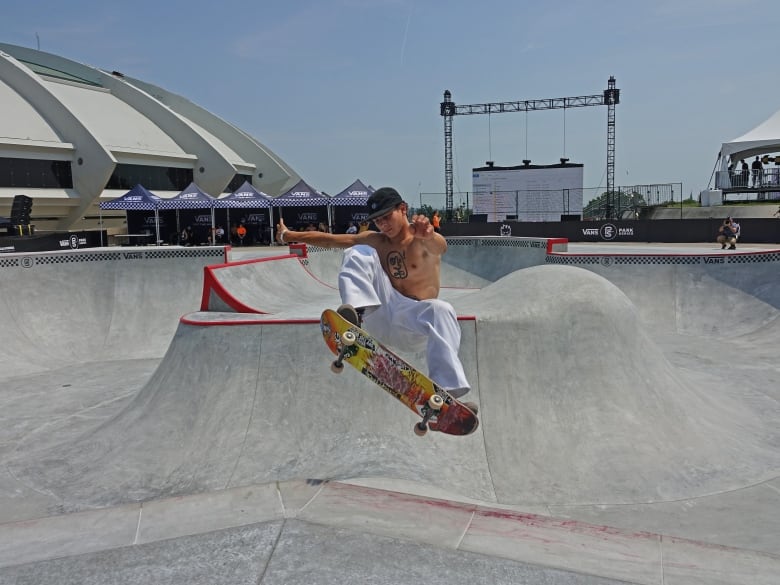 The bass-thumping, glassware-rattling Oasis Montreal Festival outside the Olympic Stadium will not get an encore performance.

The back-to-back electronic music shows over four weekends last spring drew complaints from the Big O’s neighbours. When local residents learned a second edition of the festival was planned for 2020, they blasted the City of Montreal for not putting a stop to it.

But the city administration has no say over what goes on at Olympic Park, so in the end, it was Quebec Tourism Minister Caroline Proulx who pulled the plug on the festival’s return.

Saying the cancellation was in the interest of the Olympic Park’s good relations with its neighbours, Proulx announced her decision last week as legislators discussed Bill 15, a proposal to restructure the park’s management.

“It was the only right thing to do,” said Québec Solidaire’s Vincent Marissal. The MNA for Rosemont, where the park is located, congratulated the minister for intervening.

“It was really, really annoying for those living near the Olympic Stadium, and quite frankly, this is the kind of thing we don’t need. We want the stadium to have a new life and to start on a new mission.”

Marissal said the festival proved that loud concerts demonstrate “what we don’t want to do with the Olympic Stadium.”

The MNA is pushing for the City of Montreal and citizens themselves to have a role in managing the park.

The current structure dates back to 1975, when the stadium and other Olympic facilities were still under construction, and Marissal said while it’s nice to see the park revamped, that has to be done with the neighbourhood in mind.

“Four weekends in a row of a loud music festival does have an impact on the quality of life,” he said.

Even with windows closed and ear plugs in, she said in June, “we can feel the electronic music inside of ourselves.”

Oasis Montreal’s organizer, Midway Group, did not respond to interview requests from CBC on the tourism minister’s decision.

The festival’s website shows full-screen video images of the dancing, fist-pumping crowds at the 2019 inaugural event.

“Back in 2020 for a second edition” is still emblazoned across the site, however, it is unclear where that will happen.

Midway Group, which hosts several music festivals in Quebec, has said 45,000 people attended the first edition. Another event, Metro Metro, is still on the slate for a different location on the Olympic Park grounds next year.

A spokesperson for the Olympic stadium’s manager, Régie des installations olympiques (RIO), said RIO does not comment on any discussions with event promoters.

RIO has come under fire in the past for its failure to collaborate with the city. Though RIO does not need a city permit to host events, there is an expectation of collaboration, Lessard-Blais said.

The borough mayor wants the provincial government to give Montreal a seat on RIO’s existing board of directors and on any future board, if Bill 15 is passed and the restructuring goes ahead.

In recent years, RIO has been bringing in a whole gamut of events and activities.

Philipe Dulude, a professional skateboarder from Montreal, flies out of the new bowl that opened this summer next to the Olympic Stadium. The local borough mayor welcomes new activities and events at the site, but he wants a say in the planning. (Isaac Olson/CBC)

“The events profit not only the stadium but the whole neighbourhood,” Lessard-Blais acknowledged.

“However, we really have to develop a relationship [between] the neighbourhood and the stadium itself,” he said. “All those new and good ideas, they sometimes have a strong impact on the quality of life.”

Noise isn’t the only issue. The tens of thousands of people who throng to the area for mega-events create other problems, as well — such as the trash that’s left behind.

“We have to have a reflection on how we want the Olympic Stadium to develop,” Lessard-Blais said.

Bill 15, if passed, will replace the RIO with a new management, to be called the Société de
développement et de mise en valeur du Parc olympique.

According to the proposed legislation, that provincial agency’s mission will be to develop, manage, promote and operate the Olympic Park and highlight the Olympic heritage and legacy through sporting events, trade shows and activities.

The government will appoint a board of directors to run the agency, however, the current draft of the bill includes no provisions to ensure a representative of the City of Montreal is included in that 13-member board.

Marissal said he has spoken with the tourism minister about including a Montreal representative, and she is open to the idea.

He also wants a citizen to be appointed to the board and a citizen-led committee involved in event planning.

“We all want the Olympic Stadium to be a vibrant part of eastern Montreal and we need it  — but not on the backs of citizens,” he said.