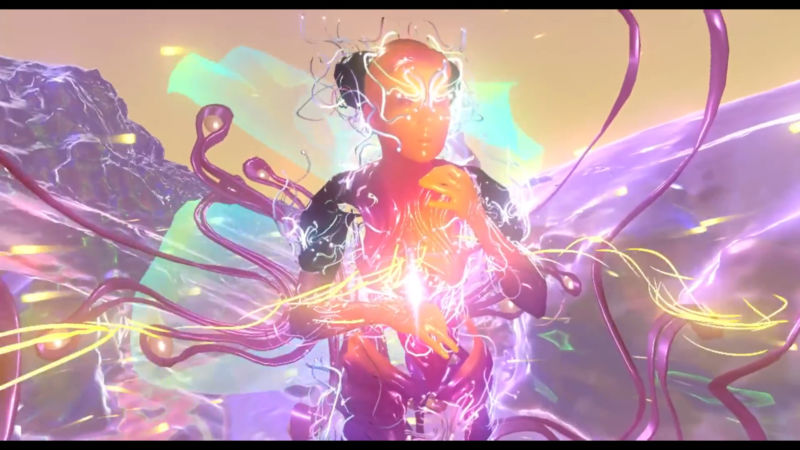 “I often feel like some sort of [technology] bridge,” singer, songwriter, artist, and producer Björk tells me over the telephone from her home in Iceland. “I’m there in the middle, to translate nerddom to the normal people or something.”

Her mix of Icelandic accent and audible excitement makes every word sound full and round as she describes her personal push-pull relationship with high-end gadgets. For decades, Björk has been renowned for layering synthesizers and electronic effects on top of her indelible singing voice to push pop music’s boundaries (not to mention music videos full of cutting-edge CGI). Professionally, she’s relished new technologies that answer her constant art-making hunch of, “someone should have invented this by now!” But in her personal life, Björk is sometimes woefully behind. She admits, for instance, that she was nearly a decade behind everyone else in her life to use systems like SMS texting and Facebook.

“I like extremes,” Björk tells Ars. “I like things when they’re really acoustic—really, hairs and bones and blood and shit. And I like the extreme opposite, where the tool or the craft gets to be the queen and takes over.”

Björk’s dynamic relationship with technology comes into stark relief when considering the reason she’s calling Ars Technica: a project called Vulnicura VR. This is arguably the world’s first full “VR pop album,” and it’s now available on Windows PCs via Steam for $24.99. It too feels like a technology bridge in the middle: an experience sitting between VR’s skeptical critics and its feverish admirers. It’s equal parts approachable and wild. Grounded in nature and simple VR filmmaking tricks, the album floats into the sky in experimental fashion like a neon-scorched phoenix.

Walk with Björk along a beach of grief

Say hello to one of Björk’s VR “puppet” incarnations. (All screens in this gallery were captured from tests of the retail Vulnicura VR app.)

Though the motion capture is convincing and lively, Björk’s form is abstracted enough, particularly with masks and other visual effects, to dampen issues with the “uncanny valley” while in motion.

Transformation is a huge motif in the best of the Vulnicura VR videos.

Another VR video in the package, for the song “Family,” frequently inserts the motif of a wound in Björk’s chest.

You’d be forgiven for thinking this looked like something else. I believe the metaphor in action is still quite striking, and appropriate, in an emotional-Björk manner.

This marbleized form of Björk repeats in a few of the videos and also figured in other mixed-media works related to the album.

Eventually, Björk extracts herself from that rock formation and floats directly into the viewer. The impact of this moment, as combined with the swelling of its song, is hard to describe in words.

One of the VR sequences casts two entirely different videos on two opposite-facing walls, so you can never look at both simultaneously. The tension is used to great effect, as if this were a museum piece.

“Stonemilker” is one of the app’s three 360-degree videos, and it eventually sees multiple versions of Björk dancing around the viewer and staring them directly in the eyes while pleading for a lover’s attention.

For a certain audience of VR fan, Vulnicura VR isn’t necessarily new. The project first emerged publicly in 2015, when Björk released a 360-degree video for “Stonemilker,” the lead single on the 2015 studio album Vulnicura. That project came out at the beginning of VR’s tipping point, in terms of mainstream interest, thanks to cheap “VR shells” like Google Cardboard. Suddenly, anyone could convert a high-end smartphone into a VR viewmaster of sorts.

While most early VR experimenters threw a mess of unfocused visuals and noise at their 360-degree projects, Björk’s first VR video was different. It wasn’t a mess. It was simple, refined, and marked by cinematic restraint.

The crew, led by filmmaker Andy Thomas Huang, placed a single 360-degree camera on a beach where Bjork had written the song—and had grappled with her recent, real-life divorce. In the video, Björk dances around the viewer, often slinking towards them and making direct eye contact, before splitting into multiple versions of herself, all dancing slowly around the viewer. It’s a clever spin on the feeling of relationship unease: of becoming multiple dancing bodies, spun into anxiety and eager to know what’s wrong (“like milking a stone to to get you to say it,” she sings). Meanwhile, a gray ocean’s waves approach nearby, hinting to the same unease that can be heard in the song’s aching, stripped-down string section. There’s no camera trickery, no perspective warping, and nothing that requires spinning around to look all over the place. It’s immersive, haunting, and memorable.

After exhibiting this video at Brooklyn’s Rough Trade record shop in late 2015 and seeing the public’s positive response, Björk accepted offers to build more VR videos for the album’s songs. This week’s Vulnicura VR app collects everything developed during the traveling exhibit’s multi-year run across the world, and it arrives at a time when owning a dedicated VR system isn’t as crazy as that sounded in 2015. “Weirdly enough, when I went into the VR album [four years ago], I allowed myself to dream that I’d be able to eventually release it on something as democratic as a gaming device,” Björk says. “But I decided that’d be a bonus. I couldn’t have that as an end target. I had to let the industry or whatever it is develop, and trust it. That, if I didn’t feel it was friendly to creating things, it was in my head. I had to change my attitude [to create something in VR], not the industry’s attitude.”

As she explains, the final version of Vulnicura VR is a many-headed beast from a production and technology standpoint. Its seven VR videos play back in four discrete “engines,” and they were built by seven different production teams. The range of styles, from simpler 360-degree videos to “fully 3D” worlds, were all bolted together by the end of 2016 with a barebones budget and an early understanding of how to optimize VR content. Björk repeatedly calls out the “DIY” and “punk” nature of the whole production, adding that she’d watch exhibit attendees in real life and solicit feedback to tweak each VR video after each exhibit.

That’s not me. That’s everyone. That’s the same Pagan little puppet you find in the Amazon, in some tribe.

“It’s one of the scariest journeys I’ve taken on,” Björk says about putting the full VR collection together. The source album, Vulnicura, follows a chronological structure as related to her real-life divorce. Björk considered that a benefit in some ways: a timeline to follow, which could add a useful anchor for anyone new to VR. “But I worried,” she says about following that structure. “Are people going to be bored shitless having headsets on? And in the beginning, people were throwing them off and shit. Can people even have headsets on for an hour?”

But the team’s VR hardware got better over time, and along the way, Björk and her production team benefited from the original installations’ biggest limitation. Every headset only had enough memory to hold a single video. Visitors had to wait in a line, watch one video, then wait in another line to watch the next, thus giving them breathing room between each. During this time, Björk learned that one of her early experiments—a sound mix that swirled around users’ ears in intense, 360-degree fashion—made viewers feel uncomfortable, not immersed. “So I started making everything still sonically with only one thing moving,” she says. “It’d be really intentional and obvious. That seemed to move people to tears, make them love it.”