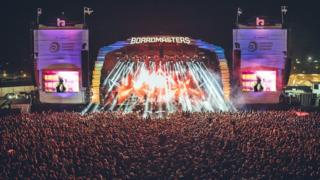 Boardmasters is an annual music and surf festival in Newquay

The Boardmasters music festival has been cancelled due to warnings of severe weather conditions.

The three-day event headlined by the Wu-Tang Clan, Florence + The Machine and Foals, was to take place in Newquay, Cornwall this weekend.

However, organisers pulled the plug due to “forecasted severe weather conditions”, they said.

A statement said the decision to cancel was made after the festival consulted police and independent safety advisers.

The Met Office has issued a yellow weather warning for much of England and Wales on Friday and Saturday – with forecasters saying a band of heavy rain will be followed by heavy showers or thunderstorms and has the potential to bring disruption.

The statement from Boardmasters said: “The safety of you, the fans and attendees, as well as performers and crew comes first, and the potential risk is too severe for the event to go ahead at this time.”

Refund information will be shared “as soon as possible”, it added.

Boardmasters, a live music and surfing festival, usually takes place every year in and around Newquay.

Other acts who had been set to perform at the festival site in Watergate Bay between 9 and 11 August included Razorlight, Dizzee Rascal and Jorja Smith.