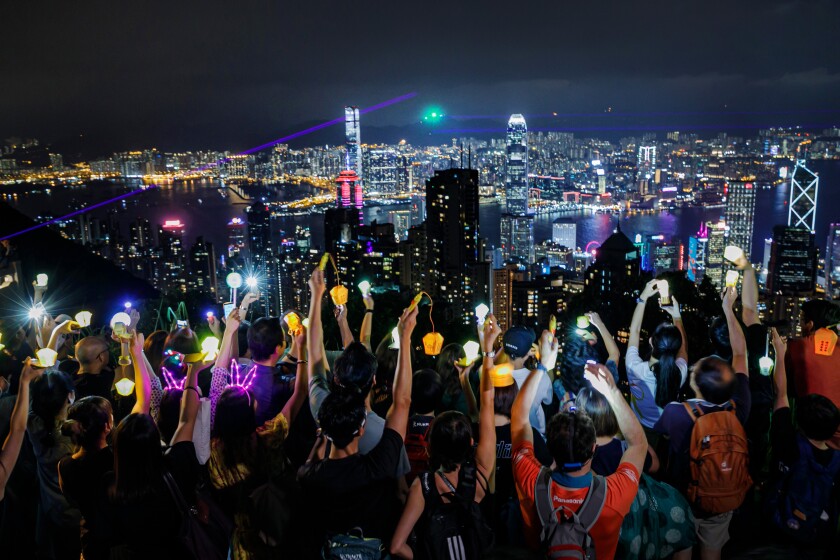 The 2 million pro-democracy protesters who have flooded the streets of Hong Kong over the last few months have been tear-gassed, beaten by police and arrested arbitrarily. But many of the territory’s most famous cultural figures have yet to speak up for them. Several prominent musicians, actors and celebrities have even sided with the cops and the government in Beijing.

The protesters are demanding rights to fair elections and judicial reform in the semiautonomous territory. Yet action film star Jackie Chan, Hong Kong-born K-pop star Jackson Wang of the group GOT7 and Cantopop singers Alan Tam and Kenny Bee have supported the police crackdown, calling themselves “flag protectors.” Other Hong Kong cultural figures have stayed silent, fearing for their careers.

The few artists who have spoken out have seen their economic and performing prospects in mainland China annihilated overnight. Their songs have vanished from streaming services, their concert tours canceled. But a few musicians have recently traveled to America to support the protesters against long odds and reprisals from China.

“Pop musicians want to be quiet about controversy, and on this one they’re particularly quiet,” said Anthony Wong Yiu-ming, 57, the singer and cofounder of the pioneering Hong Kong pop group Tat Ming Pair.

Wong is a popular, progressive Cantopop artist — a Hong Kong Bryan Ferry or David Bowie, with lyrics sung in the territory’s distinct dialect. But he, along with such singer-actors as Denise Ho and Deanie Ip, have made democratic reforms the new cause of their careers, even at the expense of their musical futures in China. Wong’s on tour in the U.S. and will perform a solo show in L.A. on Tuesday.

“It’s rebelling against the establishment, and [most artists] just don’t want to,” Wong said. “Of course, I’m very disappointed, but I never expected different from some people. Freedom of speech and civil liberties in Hong Kong are not controversial. It’s basic human rights. But most artists and actors and singers, they don’t stand with Hong Kongers.”

Hundreds of people form a human chain at Victoria Peak in Hong Kong on Sept. 13.

The protests are an echo — and escalation — of the Occupy Central movement five years ago that turned into a broad pro-democracy effort known as the Umbrella Movement. Those protests, led by teenage activist Joshua Wong (no relation), rebelled against a new policy of Beijing pre-screening candidates for political office in Hong Kong to ensure party loyalty.

Protesters were unsuccessful in stopping those policies, but the movement galvanized a generation of activists.

These latest demonstrations were in response to a proposed policy of extraditing suspected criminals from Hong Kong to mainland China, which activists feared would undermine their territory’s legal independence and put its residents at risk. The protests now encompass a range of reforms — the withdrawal of the extradition bill, secured voting rights, police reform, amnesty for protesters and a public apology for how Beijing and police have portrayed the demonstrations.

Wong, already respected as an activist for LGBT causes in Hong Kong, is one of vanishingly few musicians to have put their futures on the line to push for those goals.

Wong’s group Tat Ming Pair was one of the most progressive Cantonese acts of the ’80s and ’90s (imagine a politically radical Chinese Depeche Mode). When Wong spoke out in favor of the Umbrella Movement at the time, he gained credibility as an activist but paid the price as an artist: His touring and recording career evaporated on the mainland.

“This government will do things to take revenge on you,” Wong said. “If you’re not obedient, you’ll be punished. Since the Umbrella Movement, I’ve been put on a blacklist in China. I anticipated that would happen, but what I did not expect was even local opportunities decreased as well. Most companies have some ties with mainland China, and they didn’t want to make their China partners unhappy, so they might as well stop working with us.”

Censorship is both overt and subtly preemptive, said Victoria Tin-bor Hui, a professor and Hong Kong native who teaches Chinese politics and history at the University of Notre Dame.

“Every time artists or stars say anything even remotely sympathetic to protesters or critical of the government, they get in trouble,” Hui said. “You can literally have your career ruined. Denise Ho, after she joined the Umbrella Movement, everything she had listed online or on shelves was taken off. Companies [including the cosmetics firm Lancôme] told her they would have nothing more to do with her, and she started doing everything on her own.”

So Wong and other artists like Ho have been pushing back where they can.

Wong’s recent single, “Is It a Crime,” questions Beijing crackdowns on all memorials of the Tiananmen Square massacre, especially in Hong Kong, where there was a robust culture of activism and memorials around that tragedy. The single, which feels akin to Pink Floyd’s expansive, ominous electronic rock, has been blacklisted on mainland streaming services and stores.

Wong plans to speak out to commemorate the anniversary of the Umbrella Movement on this tour as well.

The fallout from his support of the protests has forced him to work with new, more underground promoters and venues. The change may have some silver linings, as bookers are placing his heavy synth-rock in more rebellious club settings than the Chinese casinos he’d often play stateside. (In L.A., he’s playing 1720, a downtown venue that more often hosts underground punk bands)

“We lost the second biggest market in the world, but because of what we are fighting for, in a way, we gained some new fans. We met new promoters who are interested in promoting us in newer markets. It’s opened new options for people who don’t want to follow” the government’s hard-line approach, Wong said.

Hui agreed that while loyalty from pro-democracy protesters can’t make up for the lost income of the China market, artists should know that Hong Kongers will remember whose side they were on during this moment and turn out or push back accordingly.

“You make less money, but Hong Kong pro-democracy people say, ‘These are our own singers, we have to save them,’” Hui said. “They support their own artists and democracy as part of larger effort to blacklist companies that sell out Hong Kong.”

Ho testified before Congress last week to support Hong Kong’s protesters. “This is not a plea for so-called foreign interference. This is a plea for democracy,” Ho said in her speech. A new bill to ban U.S. exports of crowd-control technology to Hong Kong police has bipartisan support.

No Hong Kong artists are under any illusions that the fight to maintain democracy will be easy. Even the most outspoken protesters know the long odds against a Chinese government with infinite patience for stifling dissent. That’s why support from cultural figures and musicians can be even more meaningful now, Hui said.

Pro-democracy artists, like protesters, are more anxious than ever. They’ve never been more invested in these uprisings, but they also fear the worst from the mainland Chinese government. “If you asked me six months ago, I was not very hopeful,” Wong said. “But after what’s happened, even though the oppression is bigger, we are stronger and more determined than before.”