Police Corporal Ronilo Dignos is a dancing cop whose goal is to keep the motorists entertained while they are stuck in traffic during peak hours. CDND PHOTO / Gerard Francisco

CEBU CITY, Philippines — Jeepneys abound on the busy streets of downtown Cebu carrying sleepy students and dazed professionals who wish for one thing early in the morning: to avoid the horror of traffic congestion.

As this happens, Police Corporal Ronilo Dignos smooths out the creases on his uniforms, fixes his belt and takes his spot at the intersection of Colon Street and Osmeña Boulevard around 7 a.m. on weekdays.

Dignos, a member of the of Cebu City Police Office-Traffic Patrol Group (CCPO-TGP), then starts managing the traffic flow, a tough job considering that the area is one of the city’s busiest thoroughfares.

But Dignos is not your regular traffic police.

His day’s work is not just about blowing the whistle and pointing which direction should the vehicles go to ensure a smooth-flowing traffic situation.

Instead, the 37-year-old traffic police performs a dance routine for 15 to 30 minutes in one of Cebu City’s busiest intersections during peak hours.

With funny dance steps and a pleasing personality, Dignos joins his fellow traffic police in fulfilling the mission of Police Colonel Gemma Vinluan, CCPO director, who spearheaded the launching of the “Dancing Cop” project last July 2019.

Vinluan says the presence of dancing cops in the city’s busy streets sends a message that police personnel are friendly and approachable.

Noting Cebu City’s notorious gridlock situations, Vinluan says the least that they can do is to make those who are stuck in traffic happy.

“We can’t easily find solutions to the heavy traffic due to our limitations. [So our traffic police are here] even in a few minutes, to be the reasons for your smiles,” she tells CDN Digital.

Vinluan launched the dancing cops project on July 15 or four days after she assumed responsibilities as CCPO director.

Vinluan says she noticed that Cebu’s traffic congestion problems affect the moods of drivers and commuters.

The dancing cops are stationed at the intersections of Osmeña Boulevard and Colon Street, below the Mambaling flyover, Gorordo Avenue and General Maxilom Avenue.

CCPO now has a total of 24 traffic policemen.

Vinluan says it is the project’s mission to bring police offers closer to the community.

“They (the police) are people that the Cebuanos can approach and ask for directions when they are lost or in trouble. [The public can approach the police] without hesitation,” she says.

Vinluan is confident that the dancing cop project will able to give “even a little amount of joy to those who are at their peak of annoyance while driving or commuting during rush hours.”

(It’s not easy to make people happy especially during those times when you want to hit the bumper of the car in front of you because the traffic is in a complete standstill.)

Dancing cops take their designated spots on some of the city’s busiests intersections between 7 a.m. to 9 a.m. and from 4 p.m. to 6 p.m.

The traffic police changed shifts every other week, says Dignos, a resident of Barangay Tayud in Consolacion town in northern Cebu.

When CDN Digital interviewed Dignos, his work shift was from 10 p.m. to 10 a.m. 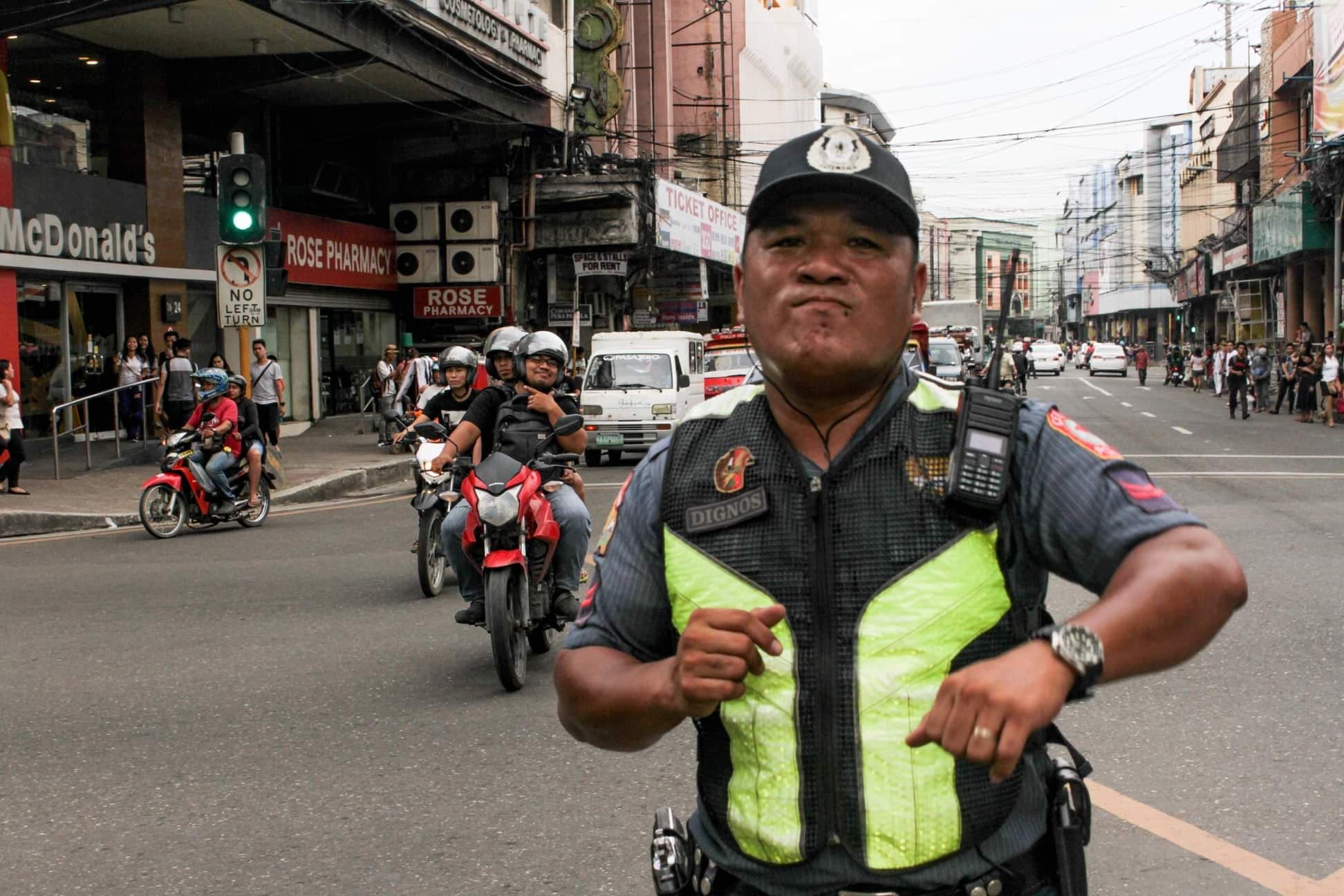 As a dancing cop, Police Corporal Ronilo Dignos prepares for his 7 a.m. dance routine as early as 5 a.m. to physically and mentally condition himself for the task ahead. CDND PHOTO / Gerard Vincent Francisco

He performs his dance routine on peak hours, between 7 to 8 a.m., when monstrous traffic jams often happen in his work station, the intersection of Osmeña Boulevard and Colon Street.

Dignos starts preparing for his dancing duties at 5 a.m.

He eats a hearty breakfast in a roadside eatery located in downtown Cebu City.

A cup of his favorite three-in-one coffee is a must to boost his energy.

With a satisfied stomach, Dignos mentally prepares himself for the task ahead.

After which, he takes his revered spot in the middle of the road where he has a view of a homegrown mall in Cebu City and several other shops selling various food products, ready-to-wear merchandise, and electronic items.

Dignos admits feeling awkward at first; after all dancing in the middle of the road is a task that is not normally expected by the public that a policeman will do.

But he has since learned to ignore the curious stares of spectators and just focus on the music playing on his phone.

His favorite accompaniment is the loud and comic sound of the budots, a dance craze that originated in Davao City.

He sways his body and creatively points his arms during the entire duration of the dance routine as he directs passing motorists where to go.

He dances for 10 minutes and then takes a 10-minute break. This cycle is repeated six times.

After his morning performance, Dignos packs her bag and goes home to her family in Consolacion town.

Another policeman takes on the task during the peak hours in the afternoon.

While their presence entertains motorists who are stuck in traffic, Birondo says a dancing policeman does not solve a problem that involves a continuous line of vehicles blocking an entire network of streets that brings traffic to a standstill.

Others feel distracted in seeing policemen dancing in the middle of the road.

But Julien Marie Pinero says dancing cops is an “awesome method to cool down hot-tempered drivers.”

“It’s one proof how we, Pinoys, always find a way to entertain and have a good laugh in any situation,” says Pinero, 21, who lives in Barangay Lahug.

Dominador Sinco, a 52-year-old jeepney driver, says the deployment of dancing policemen is a good innovation by the CCPO.

Sinco says this is the first time in his 28 years as a driver to witness dancing cops.

(At least we can see that they are serving people. Because we see a lot of policemen who are just standing there and they are not doing anything.)

Much as she wanted to implement the dancing cops project in the entire city, Vinluan says she is faced with constraints such as the lack of manpower.

The project only has 24 police officers holding the ranks of Patrolman to Police Master Sergeant.

Vinluan shares she told the 24 policemen that she personally selected them to be part of the project.

She says the project will be a great opportunity for them to showcase their talent or develop a talent aside from making a person smile in the midst of heavy traffic.

Dignos says he thought that  he had no choice but to follow Vinluan’s order and face the challenge of dancing on the streets while manning the traffic flow.

His biggest fear was that he did not know how to dance.

But to Dignos, there is always a way to find a solution when you are creative and committed.

He started to practice on his own with the help of the budots  music.

He felt awkward at first.

But his confidence improved every day as he saw the smiling faces of the motorists and pedestrians.

(At first, it was really embarrassing but later on it became a fun routine to do.)

Vinluan says she does not want to leave the police officers under extreme weather conditions for longer periods.

(We don’t want our police to get sick with arthritis from all the dancing that they do so we only deploy the dancing cops during peak hours in the morning and in the afternoon). 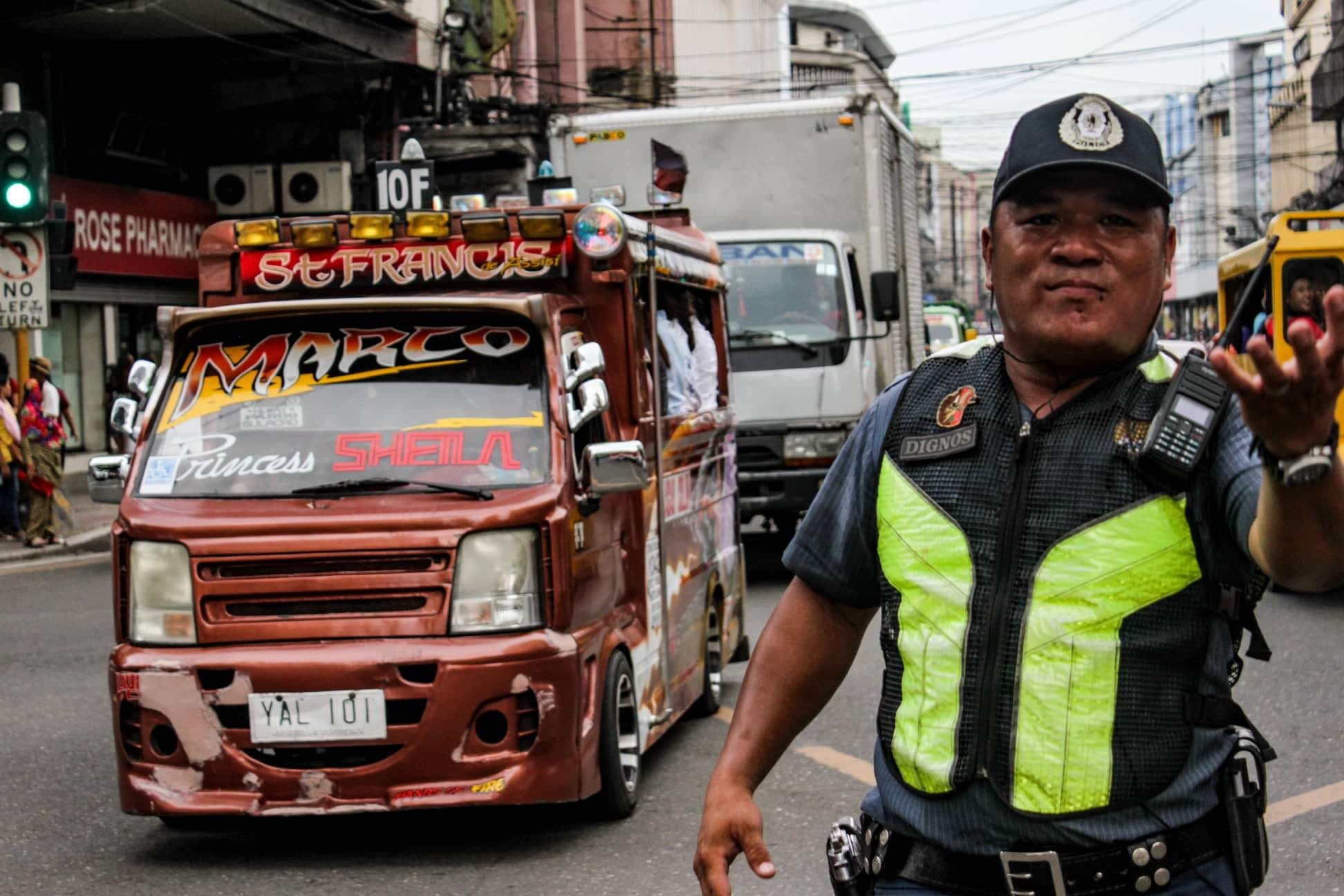 In the future, Vinluan says she wants to influence the Cebu City Transport Office to also deploy dancing traffic aides.

“As long as the people appreciate our efforts, we will continue (with what we are doing),” she says.

Police Major Allan Rosario, head of CCPO’s Traffic Patrol Group, said his men have been getting praises online and from passing motorists.

Dancing on city streets, he says, also benefits his men because this serves as an exercise for them.

For traffic police Dignos, being a dancing cop was an added responsibility to him in the beginning.

“But I eventually learned to like what I am doing. I am happy with what I do because I am able to make people happy,” says Dignos. / celr