Matt Stell has used the current coronavirus pandemic as a time for creativity. The country newcomer, who celebrated the success of his debut single “Prayed For You” hitting No. 1 on Billboard’s Country Airplay chart last year, has spent quarantine working on new music and his acting chops, as can be seen in his innovative and humorous new music video “If I Was a Bar.”

Like countless musicians, Stell has pivoted in quarantine. Instead of halting all production, Stell and music video director Dustin Haney took things into their own hands when filming the socially distanced “If I Was a Bar.” Shot with only three crew members including Haney, DP Nyk Allen and Gaffer Paul Williams at Nashville’s Fleet Street Pub, the country singer played the role of 13 different characters including a singing bartender, attentive drummer, heartbroken guy, overly zealous sports fan, businessman, and countless others.

“Releasing new music when you can’t tour or promote it isn’t ideal, but we figured that we were going to do our best not to let the times dictate what music we release and when we release it,” Stell tells me. “I have a great team that makes informed decisions, so I trust them on things like this 100%. We’re going to do the most we can safely do.”

Stell and his team followed the Nashville and Tennessee guidelines for social distancing on set by wearing masks, sanitizing their space, and staying six feet apart. “In a weird way, Covid sort of helped us in that it forced us to be creative in a way that was as safe as possible,” he says.

After receiving the song, Haney says the video treatment came to him quickly. On the song, Stell’s narration of the lyric “if” I was a bar stuck out to Haney.

“It sounded like a non-existent place, or like he was speaking to himself in a hypothetical way,” Haney explains. “Knowing that I couldn’t cast a slew of extras as bar patrons due to the pandemic, I thought of what I could do with just Matt. That’s when I had the idea of making this video feel like it’s a hypothetical bar playing out in Matt’s head, and he’s playing the role of every bar patron you would see in a beer can dive. After that we just had a lot of fun with making each of these personalities.” 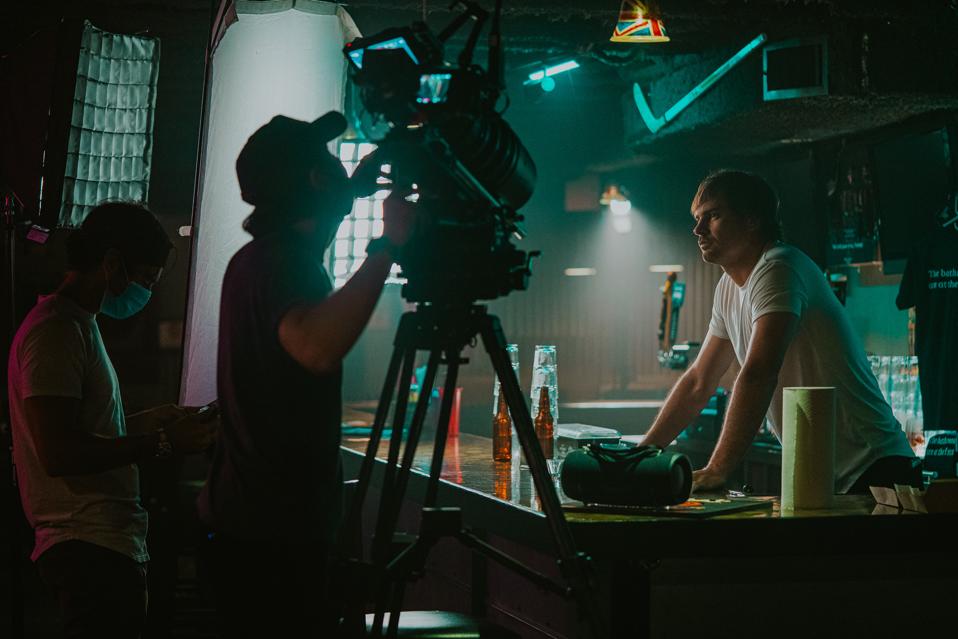 Matt Stell on the set of “If I Was A Bar” for a socially distanced music video shoot during the … [+] coronavirus pandemic.

Because of the Covid-19 era, Stell had no co-stars in the music video. Instead, he infused different aspects of his personality and “turned them up to 11” on set. “Doing it reminded me of some of my favorite scenes in my favorite movies,” Stell says of the various roles he played in the music video. “I hope people enjoy it in any way, be it the song, the video concept, specific characters. We all need to enjoy stuff right now I think.”

Meanwhile, director Haney says the pandemic has been a training exercise in problem solving and finding new creative outlets or ways to get a story across. “The new normal now is, how much can you do with how little,” Haney says. “Being that Matt played every character, he had to play each scene to an empty chair as if someone was across from him. Directing this conversation and coordinating the appropriate reaction 15 minutes later after he’d changed into the second or third character’s wardrobe was the most tedious part of the day. But honestly it was the most rewarding part looking back on this video.”

MORE FROM FORBESPandemic Pivot: How The Musicians Of The Celebrity 100 Leaned Into QuarantineBy Abigail Freeman

Though socially distanced video shoots may be the new norm, Haney remains optimistic. He also offers advice for other creatives trying to make a living during Covid-19.

“Seek knowledge when you’re jobless, face challenges head on when you get a new project, and know that ultimately when this all becomes a thing of the past, it will make you more resilient, give you faith in your capabilities, and a newfound gratitude to get to do what you do,” Haney says. “It’s our mindset that will affect how we come out of this.”

Stell’s video for “If I Was a Bar” is below.