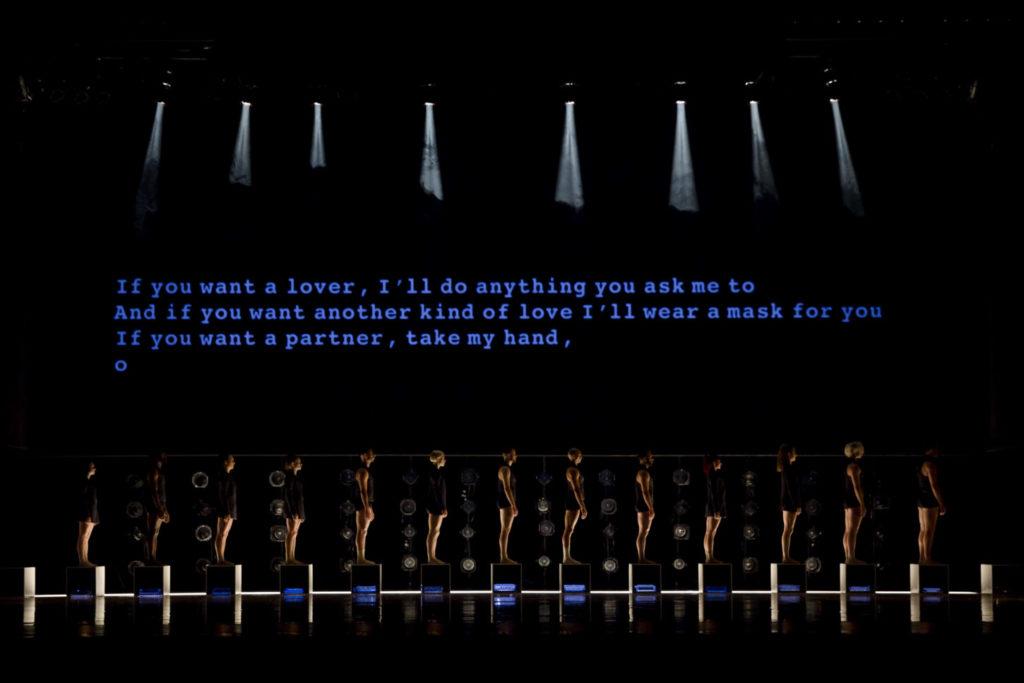 A moment in Dance Me (Photo by Thierry du Bois)

Songs of Leonard Cohen, the singer-songwriter’s first album, was released in 1967. His voice still warbled then, even lilted; it was not yet the distinctively gruff, ancient-sounding baritone that most listeners recognize.

And 52 years later, the “Hallelujah” singer’s music still holds weight for many, entranced by the emotional rawness of his lyrics and the seriousness — and, occasionally, the humor — with which he approached his craft.

Even the most dedicated Cohen fan, however, would have to admit that his music is not at the top of the list of what they might dance to.

From Sept. 26-28, at the Annenberg Center for the Performing Arts, Les Ballets Jazz de Montréal, one of the world’s most critically acclaimed dance companies, is going to try to change that perception with their popular performance set to his songs, Dance Me, making its Philadelphia premiere.

“It really conveys his music in a totally different way,” said Chris Gruits, artistic and executive director of the Annenberg Center.

The show features 17 different Leonard Cohen songs, according to Louis Robitaille, artistic director of Les Ballets Jazz de Montréal. Robitaille, like Cohen, is Montreal born and bred, and found it difficult to pare down the original list of tracks. In the end, he and the three choreographers — Annabelle Lopez Ochoa, Andonis Foniadakis and Ihsan Rustem — decided on a mix of his biggest hits and some deeper cuts. “Famous Blue Raincoat,” which became Robitaille’s favorite, is in there, but so is the lesser-known “First We Take Manhattan.”

Robitaille sheepishly admitted that the original version of the show was four hours long (the final version is about 80 minutes). The show’s title itself, of course, is a shortened version of another Cohen song, “Dance Me to the End of Love.”

The project began with Cohen’s blessing, granted before his death from leukemia in the fall of 2016. Getting permission to use his music, it turned out, was the easy part. There were greater challenges to come, Robitaille said.

First was the decision that the show would be a mix of dance and more conventionally theatrical elements.

“The marriage between those two disciplines was one of the most challenging parts of the production,” Robitaille said. “We don’t work the same way. We have to find a way to be very constructive and very efficient.”

Coordinating with three choreographers was no small feat.

Put more succinctly: “It was a big challenge to approach his talent,” he laughed.

Robitaille, like Gruits, sees the show as a chance for fans of Cohen’s work to experience his work in a radically different way. He described the experience of seeing the show as “like going to see a movie where you read the book before.”

Gruits sees the show as an accessible entry point for those who are familiar with the music, but wouldn’t typically find themselves at a contemporary dance performance.

Noting that Cohen drew on Judaism for inspiration is old hat, but examples are endless.

“Hallelujah,” taken from the story of King David, is the most frequently cited, but don’t forget “Who By Fire,” playing on the Unetanneh Tokef prayer recited on the High Holidays, or “You Want It Darker,” the title track off his final album, which repeats in the chorus, “Hineni, hineni, I’m ready, my Lord.”

Gruits acknowledged these influences, but he believes that the show, much like Cohen’s music, still has something for everyone. At times, he said, it’s a little bit like a rock show.