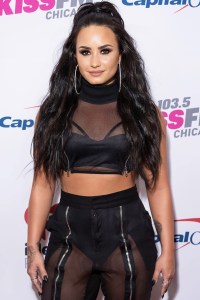 2020 may be Demi Lovato’s year for the taking! The singer hinted that she is releasing new music sooner than fans may have expected.


Demi Lovato Through the Years

“The next time you hear from me, I’ll be singing….” Lovato, 27, wrote via Instagram on Wednesday, December 4.

Lovato previously teased that she has been busy in the studio as of late. “Recording a song for my loyal #Lovatics. The ones who support me and whatever makes me happy… If you hating – that ain’t you, BYE,” she captioned an Instagram Story in November in the recording booth.

While the Camp Rock actress has yet to formally announce a release date for her next single or album, it will be her first release since June 2018, when she dropped the standalone single “Sober.” A month later, she suffered a near-fatal drug overdose at her Hollywood Hills home that left her hospitalized. She subsequently sought treatment at a rehab facility before returning home in November 2018.

“You know what’s great about making an album? You get to say anything you want, be as open and honest as possible and tell your side of the story regardless of who might not like it,” she wrote on her Instagram Stories in June.

Since becoming sober again, Lovato has been busy with her career. She filmed a three-episode stint for the final season of Will & Grace, which is set to air on NBC in 2020. She also joined the cast of Will Ferrell’s upcoming movie Eurovision.

The Grammy nominee’s personal life has had some new developments too. In November, she made her relationship with Wilson, 25, Instagram official by sharing a sweet photo of them together. A source later told Us that the couple are “great influences on each other.”