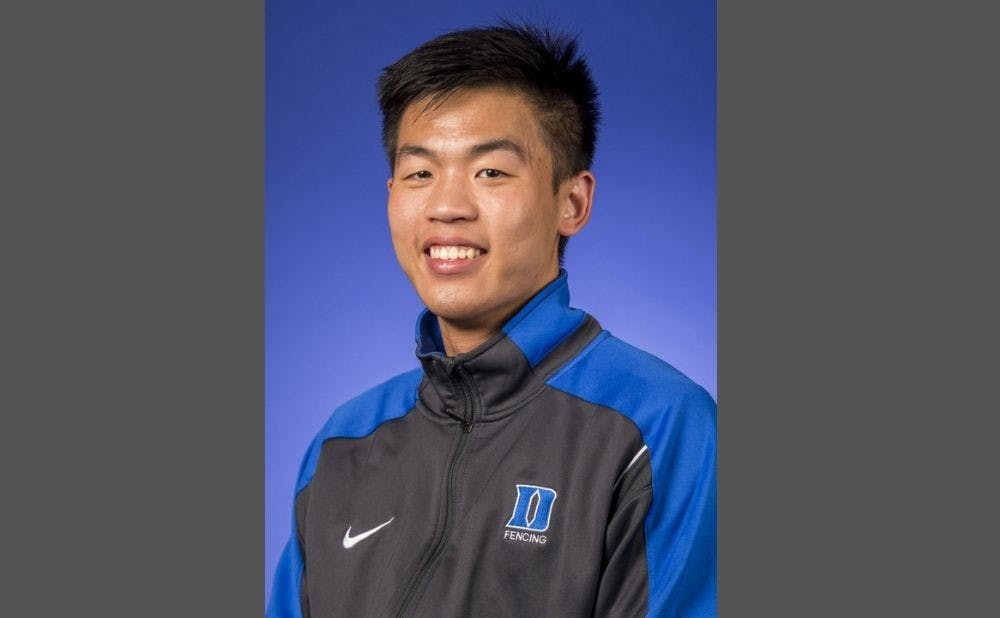 When Ping Ping Kitsiriboon’s not fencing, you can often find him at Small Town Records. Courtesy of Duke Athletics.

Imagine if Tom Brady doubled as the lead singer in a rock band or if Green Day formed the starting outfield for a baseball team. As one Duke student strives to clench a spot as a fencer in the 2020 Olympics, he still makes time for his other passion: music.

Junior Ping Ping Kitsiriboon, a citizen of Thailand, had always enjoyed sports, participating in swimming, basketball and baseball. But he began his fencing career in an unusual way. Flooding from the 2011 monsoon season in Bangkok drove everyone indoors and stopped him from playing his other sports. Kitsiriboon then fortuitously wandered into a mall, where he viewed his first-ever fencing tournament.

Immediately, he was hooked. Kitsiriboon continued to play his other sports for a period of time, but as he continued to pile up accolades against local competition, he realized that he had the potential for bigger success in fencing.

He got the chance to train in Germany, and then he enrolled at Duke, both of which offered chances to improve against the best. Iron sharpens iron, especially in fencing, and these new opportunities honed Kitsiriboon’s talent significantly.

The resources of Duke enabled Kitsiriboon to boost his mental endurance and learn more about the sport. Pascual di Tella, Trinity ‘18, one of his former teammates and fellow saber fencer “pushed [him] to work hard everyday,” Kitsiriboon wrote in an email. He keeps di Tella’s motivation “to heart to this very day,” he added.

“Getting to know people who are equally as focused and motivated to win not just in the fencing team but in other extremely competitive sports teams has been a great factor in the unchanging of my perspective,” Kitsiriboon wrote.

Kitsiriboon’s main goal is to qualify for the Olympics. Only the top 32 fencers in the world qualify for the men’s individual saber category, so Kitsiriboon’s relative youth works against him in 2020. But, with a few more years of preparation, he believes he can contend for the 2024 Olympics.

While at Duke, the saber fencer has placed at the NCAA and ACC championships. He finished in 11th place at the 2019 NCAA Championships in his division, and Duke finished in eighth place nationally. The team came in second place in the ACC Championships, where Kitsiriboon finished in the top 15 for his division. Additionally, Kitsiriboon was selected as an All-ACC academic team member, reserved for the top students across the 15 league schools.

When he puts down his saber for the day, Kitsiriboon heads to Small Town Records, Duke’s official record label. As the head audio engineer, Kitsiriboon has helped create tracks of country music, hip hop and R&B. He is especially proud of his work with Kalif  “Apollo J” Jeremiah, Trinity ‘19, who has come out with hip-hop songs like “Bounce” and “Loose Wit It.”

The differences between music and fencing enable Kitsiriboon to relax during a stressful fencing schedule. Duke fencers have morning practices and train later in the afternoon, according to Kitsiriboon.

“Fencing involves a lot of muscle memory, coordination, being able to think and adapt on the spot and repetition to succeed, while music production and audio engineering involves a lot of creativity and patience,” Kitsiriboon wrote. “The reason I started taking on this audio engineering job was to be able to step away from sports for a short period of time everyday and focus on the other thing I love, music.”

Kitsiriboon encourages all students to attend fencing matches or to enter Small Town Records for the simple reason that an unknown passion may emerge. Whether you see him wearing his fencing saber mask or his headphones behind the synthesizer, expect to see his own devotion on display.

“I always try to keep my standard of fencing, studying and pursuing audio engineering at a high level,” he wrote.