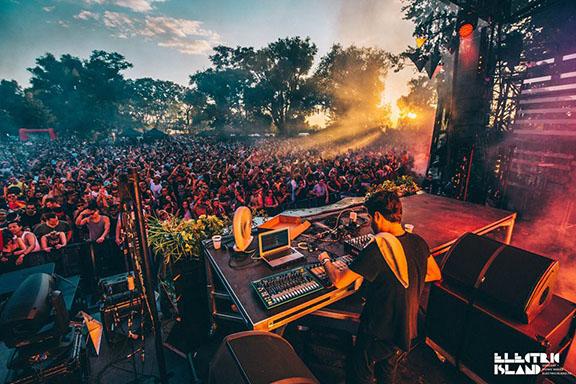 For the second time this summer, Electric Island has moved its celebration of dance music to Woodbine Park on Saturday, Aug. 10.

Toronto’s Electric Island dance music celebration will be back at Woodbine Park this Saturday due to continued flooding concerns on the Toronto islands.

Electric Island takes place Saturday, Aug. 10, from 2 to 10 p.m. and will feature DJ’s such as Hot Since 82, George FitzGerald, Dusky and more.

Originally scheduled to take place at Hanlan’s Point over a series of four events, this is the second Electric Island that has been shifted to Woodbine Park (1695 Queen St. E.) due to flooding on the Toronto islands this summer.

The June 22 version of Electric Island was also held at Woodbine Park, and the event was considered a success by organizers.

“The vibes were high at the June 22 edition this past weekend, as Toronto finally danced in the sunshine with smiling faces all around,” the Electric Island website read.

Electric Island is scheduled to wrap up its 2019 season with a two-day festival on Aug. 31 and Sept. 1 with a finale still planned to take place at Hanlan’s Point.


Did you enjoy this article? If so, you may consider becoming a Voluntary Subscriber to the Beach Metro Community News and help us continue providing the community with more local content such as this. For over 40 years, our staff have worked hard to be the eyes and ears in your community, inform you of upcoming events, and let you know what and who’s making a difference. We cover the big stories as well as the little things that often matter the most. CLICK HERE to support Beach Metro News.