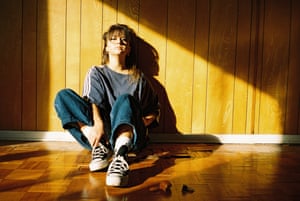 “You should write like your parents are dead … or you’re dead … or everyone’s dead,” the author Alice Kim once said.

The advice – that the best creative work comes from those freed of worry and responsibility – was also offered to Grace Shaw, the Australian pop artist who performs as Mallrat, when she was working on Charlie: the confessional new single from her third EP, Driving Music.

“It’s almost impossible to write something if you’re getting ahead of yourself and start thinking about what people are going to think. It’s so dangerous,” she tells me. We’re having lunch at her favourite Brunswick cafe, where a rare afternoon of winter sun lets us sit outside, greeting every dog who passes by. “The beauty of music and art is the scary stuff.”

Known for crafting catchy electronic songs that turn the melodrama of Gen Z life into dreamy anthems, Shaw knew that Charlie – named for her family Labrador – was something different: a deeply personal song that covered new ground, but could also leave her more exposed than usual.

Her signature moody, hopeful haze opens the song, but soon she squares her shoulders at her mother, who “smells like cigarettes” and offers unhelpful platitudes about love. “But when did I start taking her advice? / I raised myself and that’s alright,” she spits boldly.

Shaw has been splitting her time between Los Angeles and Melbourne for the past few years – but we meet a day after she has returned from a European tour. She wears delicate gold studs in the shape of tiny bees in her ears, and bears a sketch of the insect on her left bicep. After ordering some honey for her soy chai, she laughs that it is “a vegan grey area”: “Honey just seems so wholesome. Some people get freaked out by bees but whenever I have a day off, I just sit in my garden and look at them for the whole day.”

There’s an innocence to Shaw, who’ll turn 21 this spring, that never threatens to be misread as naivety. She’s confident and focussed, describing how she studies the producers she collaborates with in order to better articulate what she wants from her music. But she remains silly, light and quick to joke: the kind of person who is as at home sitting quietly watching the bees as she is holding swelling festival audiences in the palm of her hand, as she did at last month’s Splendour in the Grass.

Mallrat’s music has been capturing the disaffection of her generation since the beginning. “Everything I do is about feelings,” she says, describing her work as “songs about everything and nothing”. Tracks like Uninvited and Tokyo Drift – which she recorded in 2016, when she was just 17 – articulated the stifling monotony of being a young person living on the outskirts of small towns and cities. They name-checked the places where teens escaped their bedrooms to congregate in public: Brisbane’s Fortitude Valley, Westfield malls, Hungry Jack’s.

But her tracks now boast more than 150m Spotify streams cumulatively; she’s been tipped as one to watch by Zane Lowe; and she sells out shows at home and overseas, including one in LA that inspired Mark Ronson to reach out (he’d “definitely be down” to collaborate, he’s said).

I wonder if her success ever clashes with that ingrained feeling of not fitting in.

“Having people listen to my music doesn’t at all equal feeling connected,” she says definitively. And when it comes to being an outsider, it was always more geographical than social. “When I wrote those [songs] I was living in Brisbane. It’s home, but … I definitely felt like I didn’t belong there.”

‘Brisbane is home, but I felt like I didn’t belong there’. Photograph: Tash Bredhauer

The specifically suburban feeling of green P-platers driving endless circles around their hometowns’ main drags is captured in her new EP, as is the intimate link to her childhood and the younger sibling who lives somewhere in between that space and the one Shaw occupies now.

“I’m 16 in October / But my boyfriend’s a bit older … They think I got potential, I think they got the wrong girl,” Shaw sings on When I Get My Braces Off.

“That song’s for my little sister,” she smiles. “She’s such a piece of work, but I love her so much.”

Sitting in the studio one day, Shaw was struck by the idea that girls like her sister were not catered to by the kind of heavy, angsty rock that teenage boys had channelled their adolescent rage through for decades. “Teenage girls only have really pretty, lovey songs or really cliche, ‘inspiring’ songs – and I wanted to make one that’s just, like, about being rough.” Her dream for the song was that her sister and her friends would “blast [it] on their annoying speakers that they carry on the train”.

As we talk, she runs her fingers along the cover of Trent Dalton’s novel Boy Swallows Universe, a story set in her hometown. She started reading it only the previous day, but the dog-eared page marker shows she’s close to done. She describes to me a character imploring his friends, who are writing letters to inmates at a prison, to hone in on the granular moments of their day that will bring the outside world alive to them: “He’s like, ‘Talk about if you went to the shops. Did you did you ride your bike? Did you walk? Did you see a rainbow? What did you get? Did you get a chicken sandwich?’ Because that’s what’s special.”

The act of avoiding broad and vague descriptors in favour of the intimate and specific connected to her own writing. “It’s such a trap that a lot of pop songwriters fall into: We [have to] make it broad so that everyone can relate. It’s totally not how it works.”

• Mallrat is playing in Brisbane, Sydney, Adelaide and Melbourne in August, ahead of a major US tour in September. Her new EP Driving Music will be released on 6 September