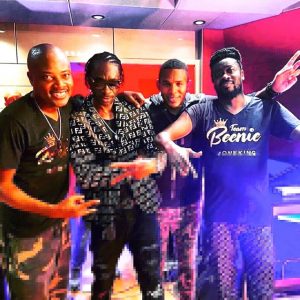 Amid the gloomy times of the Covid-19 shutdown and widespread economic doldrums, a therapeutic lifeline of sorts was thrown out to the legions of Jamaican music lovers from all over the world courtesy of Verzuztv’s virtual friendly ‘tune fi tune’ face-off between dancehall icons, Beenie Man and Bounty Killer, on Instagram Live on Saturday, May 23, 2020 (coinciding with the Memorial Day holiday weekend in the U.S.).  In the history of their memorable in-person lyrical clashes spanning over two decades, these two Jamaican dancehall music heavyweights took their act to into cyberspace where roughly 500,000 viewers tuned in to view the live stream.  As it happened, the party was all that and then some in terms of what was expected.

The action got underway at 8pm sharp (Eastern Standard Time) as scheduled, with a nice bag of tunes as a warm-up courtesy of selectors, Richie D and Kurt Riley.   The broadcast was definitely high-quality—especially when considering that it was being live streamed over the internet—as the music sounded very crisp.  Classic songs by seasoned reggae and dancehall artists were certainly well-timed.  There was diverse array of selections from the likes of Buju Banton, Damian Marley, Garnett Silk, and Bitty McClean, just to name a few.  Then, the vibes went way up with the playing of the 1990 melodic gem, ‘Ragamuffin Love’ (Life is what you make it) by Frighty & Colonel Mite.  Meanwhile, Beenie Man could be seen casually milling around waiting for Bounty Killer’s entry as showtime drew near.  All the while, the names of the attendees joining could be seen scrolling upwards on the screen.  And needless to say, they were joining in droves and by the time all was said and done, the list contained countless celebrities from both Jamaica and abroad.  Some of the biggest names were Usain Bolt, Asafa Powell, Fluffy Miss Kitty, Shaggy, Diddy, Dj Khaled, Buju Banton, Popcaan, Konshens, Spice, Rihanna, Lisa Hanna (Member of Jamaica’s Parliament), Erykah Badu, Missy ‘Misemeanor’ Elliott, Swizz Beats, Keri Hilson, Jadakiss, Fabolous, BET Music, Swizz Beats, Timbaland, and so many, many more.

Indeed, Bounty Killer and Beenie Man are no strangers to each other.  Perhaps their biggest moment on stage, which has fueled their popularity for over two decades, was in 1993—as in ‘Sting 1993’.  As I wrote in my story last summer following Reggae Sumfest in Montego Bay —‘From Archrivals to Legendary Dancehall Idols, Bounty Killer and Beenie Man Traded Amicable Lyrical Barbs at Reggae Sumfest 2019’:  “It was at the 1993 stage show at Jamworld in Portmore, Jamaica known as ‘Sting’, which used be held annually on December 26th—commonly referred to as Boxing Day—where the entire country was seemingly overwhelmed by pandemonium as, dancehall entertainer, Beenie Man was in the midst of his performance when it was rudely interrupted by a menacing chant ‘People Dead’….‘People Deadd’….‘Deaaddd!!’  A startled Beenie Man quickly realized what was afoot.  That is, the figurative yet sorrowful exclamation which was heard throughout the Jamworld venue was echoing from the microphone of his fierce archrival, Bounty Killer, who had barged on stage as if he was a gladiator to challenge Beenie Man to a lyrical clash live, direct and unannounced at what has become known simply as ‘Sting 1993’.”  Since those days of hectic back-and-forth clashing, the two iconic figures in Jamaican dancehall have admitted that they are close friends and have been for quite some time.  In fact, during Saturday night’s Instagram live event Bounty stated: “Pon di stage wi war, but inna real life wi par.”  That camaraderie was surely evident with the two joking around with each other throughout their joint performance.

Right around 8:30, the online party got underway in earnest after the Jamaican national anthem was played on the set.  Fittingly, the Caribbean island’s flag was draped against the backwall behind the selectors—who soon had their hands full in amid the frenzy of juggling various dancehall riddims right on cue for both Beenie (aka ‘Di Doctor’…‘King of the Dancehall’) and Bounty (aka ‘Di Warlord’…‘Five Star General’).  In the early going, Bounty and Beenie reminded fans of their foray into the American hip-hop world.  In that spirit, they both took turns in showcasing their biggest mainstream cross-over hits, such as Bounty’s collaboration with the rock band, No Doubt, and Beenie’s combination with American R & B singer, Mya, in ‘Girls Dem Sugar’.  After that, Jamaican dancehall tracks took center stage with a few of their most unforgettable clash tunes, including ‘Memories’, ‘Slam’, and ‘Romie’ by Beenie Man.   In turn, ‘Di Warlord’ reeled off ‘Suspense’, ‘Benz and Bimma’, ‘Bullet Proof Skin’, ‘Smoke Di Herb’, as well as ‘Worthless Bwoy’.  ‘Old Dog’ by Beenie Man was also a favorite among the sea of viewers who were commenting in the chat rapidly with their forwards.  Dave Kelly’s legendary showtime riddim was also featured and both artists jumped all over it!  Beenie belted out ‘Hypocrite’, and Bounty came with ‘Eagle and Di Hawk’.  And in chanting his timeless hit, ‘Fed Up’, Bounty also showed why he also goes by the name, ‘Poor Peoples’ Governor’, in dancehall circles.

As we all know, dancing is an integral and indispensable component of dancehall music.  So, with Beenie’s call for the ‘Corduroy Riddim’, his daughter, Desha Davis, stepped onto the screen and did the ‘World Dance’ to Beenie’s song of the same title.  Meanwhile, ‘Di Doctor’ stood by and chanted the song’s lyrics as Desha slid from side-to-side.  Desha also goes by the name of Desha Ravers, in her being a member of arguably the hottest dance crew in Jamaica today—‘Ravers Clavers’ led by lead dancer, Ding Dong.  The dancing vibe emanated by ‘Ravers Clavers’ harkens back to the the ‘Black Roses Crew’ in the late 1980s and 1990s.  Their dancing component was led by Gerald Levy aka ‘Bogle’—Jamaica’s greatest dancer of all time in the eyes of many.  The ‘World Dance’ performed by Desha Ravers was originally created by the late Bogle, who had also originated many other dance moves that went international, including the legendary ‘Bogle Dance’ (to which Buju Banton titled a song after).  Bogle was without a doubt a dancing genius, since he was also the man behind:  ‘Wacky Dip, ‘Urkle Dance’, ‘Sesame Street’, ‘Wave’, ‘LOY’, Jerry Springer, and ‘Row di Boat’.  And so, it was good to see Desha bring a part of Bogle’s dancing legacy to Verzuztv’s Beenie vs. Bounty’s Instagram live event.

In concluding, a notable part of Saturday night was when the happenings were briefly interrupted by a knock at the door while Beenie and Bounty were performing.  It was the Jamaican Constabulary Force aka the Police.  Beenie was quick to take charge of the situation in explaining to the officer what was going on: “we are live online with 500,000 people…so tell me do you want to be that guy?”, asked Beenie in a humorous tone.   The officer declined on his invitation and departed, thereby allowing the online session to continue.  In doing so, it spoke volumes…people needed a safe break from the doom and gloom of Covid-19, and Jamaican dancehall and culture served as the vehicle—with a historic trend-line of upwards of 500,000 viewers magnetized to the aura and energy of music that Jamaica invented and took to the masses in the newly emerging paradigm shift of music shows and events taking place in cyberspace.  Lastly, it would be remiss not to say special thanks and big up Swizz Beats, Verzuztv, and Cîroc for the platform that unleashed Beenie and Bounty’s energy in the name of Jamaican dancehall music and culture.   For all that joined the live-streamed event, it was a much-welcomed respite from the ongoing turbulent and uncertain times of the Covid-19 pandemic.