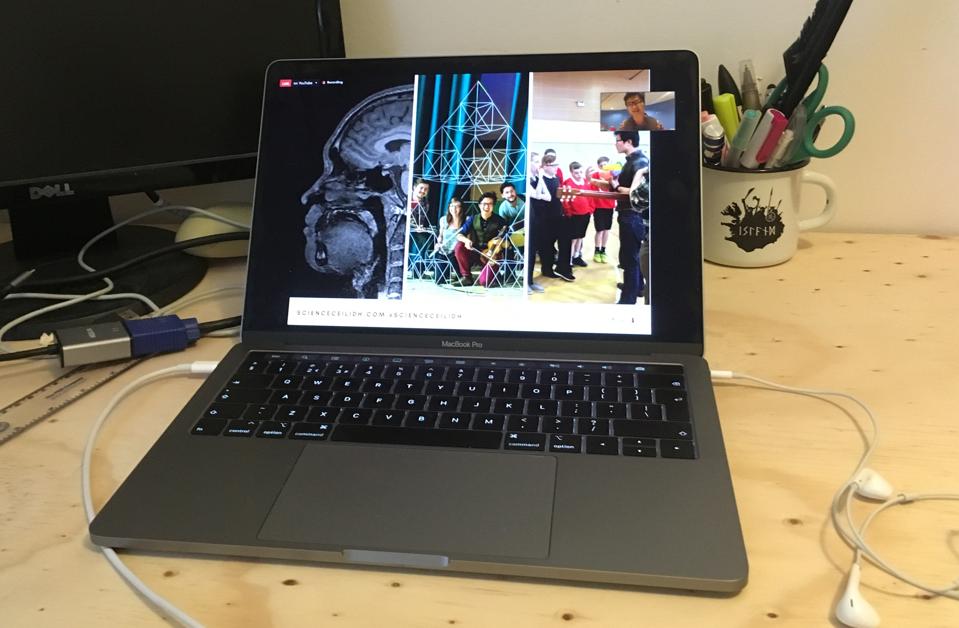 Earlier this week, the VOICES conference featured two days of talks from science educators and communicators who use music to share ideas about science, technology, engineering and math (STEM).

VOICES (which stands for Virtual Ongoing Interdisciplinary Collaborations on Educating with Song) took place entirely online, which allowed participants from all over the world to present talks about their own unique methods of using songs or music to talk about science.

The virtual online VOICES conference highlighted the variety of ways that science educators and communicators are using music to talk about science. Here, Lewis Hou shows his Science Ceilidh project.

Keynote speaker Edmund Adjapong spoke about Hip-Hop Based Education, and the method’s success in engaging students with educational topics by having them engage and participate than forcing Hip-Hop into the curriculum.  As an example, he talked more about the Science Genius rap battles, first held in New York City. The format is a friendly competition, in which students are judged not only on their performance and lyrical skills, but also on the scientific quality of their lyrics. Adjapong said that they’ve seen students who previously showed little interest in science suddenly start researching topics outside of the mandatory curriculum just to make their rap more interesting and scientific.

In other talks during the two-day online event, speakers covered a broad range of topics. Bioacoustician Sara Niksic spoke about making music inspired by whale song, Shashi Kant Pandey logged in from India to share his mathematical poetry, and Jerry Appell showed how he had created educational songs aimed at adults rather than children.

Despite the broad range of artistic styles, scientific fields and educational levels, there were some recurring themes among the talks. Speakers largely agreed that the best way for scientists to teach with music is to keep people engaged with entertaining music, and that it was not useful to try to cram too much information in a song.

Interspersed between talks about different methods of engaging people with science through music, the audience was treated to a playlist of science songs from a wide range of YouTube videos. From A Capella Science’s “Evo-Devo” (set to the tune of Despacito) to Oort Kuijper’s S.T.E.M. rap and Monty Harper’s catchy “Science Frontier” these videos covered some of the variety in themes and formats of science music.

One section of the conference included several speakers who use their musical skills for community science outreach. Here, Helen Arney sang one of the science-themed songs that she’s taken to various events in the UK. On the same panel, Benji Jones and Liesbeth Tip spoke about a choir they launched in Edinburgh a few years ago. The Harmony Choir started as a scientific experiment: to study the effect of participating in a community choir on mental health. Even though the project was due to end after a few months in 2017, the choir is still going strong, because the participants didn’t want the project to stop after the research was finished.

This year’s virtual conference was the third year the event took place. “I’ve been impressed with the talent of this years’ presenters,” says conference organizer Tiffany Getty. “Their wide range of perspectives clearly shows that people in STEM are very open to the idea of collaborating with the arts.”

Getty is a high school chemistry teacher as well as a PhD student in education at Wilkes University, and she adds that she would perhaps have liked to see more VOICES attendees who work in primary or secondary education. But perhaps the start of the new school year is too hectic for teachers to make time for additional meetings – even those that take place entirely online and include music in almost every talk.

Disclaimer: Although I was not involved in organising the VOICES conference, I have been involved in VOICES workshops in previous years, and was previously familiar with several of the speakers and organisers.