Will anyone who watched the series finale of “The Americans” be able to hear U2’s “With or Without You” the same way ever again? Would even the most fervent “Game of Thrones” detractor argue against the stirring brilliance of its opening theme? Could a 10,000-word think piece do a better job of capturing the complexity of the #MeToo cultural moment than the three-minute-long “Let’s Generalize About Men” from “Crazy Ex-Girlfriend”?

Like true crime and Margo Martindale, music has been central to the creative revolution of “peak TV,” lending emotional resonance, dramatic nuance and comic power to our favorite shows. Here, the creative forces behind five noteworthy series returning this fall talk about their favorite musical moments.

Camilla Luddington, Khalilah Joi, and Kim Raver in the “Grey’s Anatomy” episode “Silent All These Years.”

In a powerful episode directed by Debbie Allen and inspired by Christine Blasey Ford’s testimony against Supreme Court nominee Brett Kavanaugh, Jo (Camilla Luddington) is treating a rape survivor named Abby (Khalilah Joi) who is terrified of undergoing surgery for her wounds. So the women of Grey Sloan Memorial Hospital line the hallways in a show of support that’s echoed in the lyrics of Ridings’ ballad. (“I’ve been strong for so long/That I never thought how much I needed you.”) Pass the tissues.

“I never once watched that scene without tearing up, and the song was a huge part of that,” said showrunner Krista Vernoff, who gives credit to music supervisor Alexandra Patsavas for finding the track and editor Vanessa Delgado for locating the perfect place for the song by the young English musician.

“The irony is that [Abby] had been through something so brutal, she’s covered in bruises, she’s shattered — and yet, we are playing a love song. The women line that hallway with looks of total knowing, total support, looks that say, ‘I’m here,’ ‘I see you,’ ‘I’ve been there,’ while a love song plays, giving new meaning to the lyrics, giving new meaning to what love can be, what love can do.” 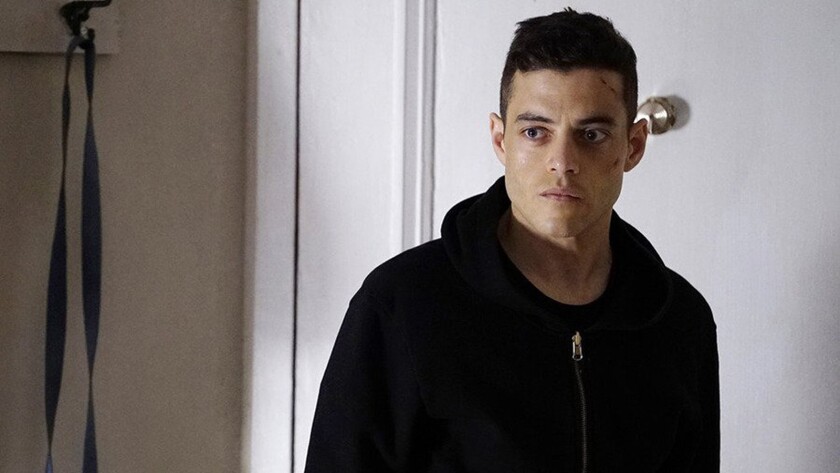 Rami Malek returns Wednesday for a second season of the edgy drama “Mr. Robot” on USA.

In an excruciatingly tense and slow-building scene from Sam Esmail’s paranoid techno-thriller, Scott Knowles (Brian Stokes Mitchell), an executive at the conglomerate E Corp, brings a duffel bag stuffed with millions of dollars in ransom money to a drop-off point in downtown Manhattan, then sets it ablaze as gawkers look on — all as Phil Collins’ “Take Me Home” plays on the soundtrack.

“The drama unfolds so slowly that it allows us as storytellers to play the audience in surprising ways,” says creator, writer and director Sam Esmail, noting how the music “sneaks up” on the viewer, slowly shifting from diegetic sound buried in the background of the scene to “a full-blown anthem.”

Esmail had originally considered using score for this scene but, he says, “it often felt like it was telegraphing suspense instead of building it.” So he opted for a light-hearted pop song instead. “The clash of tones created an interesting contrast that nailed the perfect blend of dynamism and tension.” “Take Me Home,” he adds, “had the benefit of feeling entirely unexpected while also maintaining an underlying frenetic energy that created suspense in such a unique way.”

Email says that music — whether it’s Mac Quayle’s score or memorable needle-drops like a haunting piano version of the Pixies’ “Where Is My Mind?” — is “at the soul” of everything he makes. “I can’t think of my favorite parts of ‘Mr. Robot’ without thinking of the music first.” The animated comedy “Big Mouth” uses hilariously raunchy original songs, from the Gloria Gaynor-esque “I Love My Body” to the Queen-inspired “Totally Gay,” to explore puberty in all its mortifying glory.

But for composer and songwriter Mark Rivers, the real standout is “Shame,” in which the Shame Wizard croons about the purpose he serves — tormenting hormonal adolescents. (Sample lyric: ”I’m here to steer you right and to shine a naked light on all the horrid things you do.”)

“Sometimes the songs [in ‘Big Mouth’] are just fun little set pieces that don’t need to convey much more beyond the lyrical jokes,” Rivers said, “but it’s always more gratifying when the song has a bit more of a job to do, to propel the story or to give insight into a character.”

Rivers was told to go for a menacing vibe with “Shame”; it was his idea for a chorus reminiscent of the Beatles or David Bowie. “The whole vibe of the song changes to a melancholy pop song, which I think makes the character a bit more sympathetic. David Thewlis provided a great vocal and the song came out nicely, comically dark, I think.”

In the closing scene of the pilot episode, programmer Richard Hendricks (Thomas Middleditch) and his ragtag associates decide to turn down an opportunity to sell his start-up, Pied Piper, to the Google-esque Hooli, and instead pursue a riskier but potentially more lucrative offer from a venture capitalist.

Mike Judge had always wanted to use the Green Day song, with its energetic switch from acoustic to electric guitar, to roll into the closing credits and “capture the feeling that they’re going to start this whole journey together,” he says. But it almost didn’t happen because the song was initially deemed too expensive. A sound-alike they created didn’t quite work, and HBO’s Amy Gravitt pushed to make it happen. “It’s one of the only times I had the studio not only be supportive but have it be their idea to spend more money,” Judge notes.

For Judge, another standout cue is “Nobody Speak,” a hyper-aggressive song by D.J. Shadow featuring Run the Jewels, which humorously punctuates the Season 3 premiere, “Founder Friendly.” As he did so memorably in “Office Space,” Judge likes to use hard-edged hip-hop as an ironic way of capturing the frustration and anger of characters who are, well, not that tough.

“Our guys are not badass guys. So when the music has some real swagger to it, it helps serve the story. And there’s also something funny about having big, heavy, gangster rap playing over nerdy guys.” 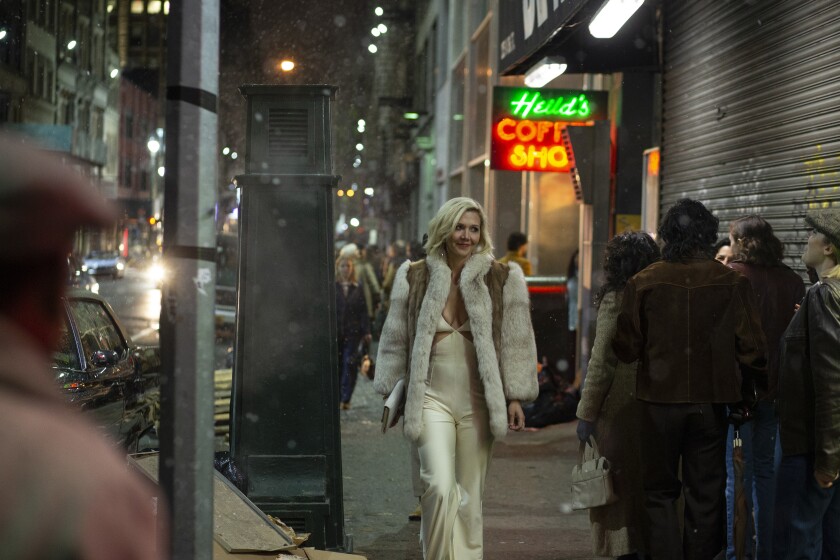 Maggie Gyllenhaal in “The Deuce.”

Whether it’s disco, funk, soul or punk, music plays a vital role in “The Deuce,” set in New York’s seedy pornography business in the 1970s and ‘80s. The opening scene of the show’s second season was set to the title track from White’s 1976 album. “As Candy [Maggie Gyllenhaal] walks down a midtown street, snowflakes falling around her, and then enters a stairwell, we hear the spoken story-intro to the song,” explains co-creator George Pelecanos. “The volume increases as Candy ascends the stairs and booms into the chorus as she enters the 366, the new after-hours club run by Vincent Martino [James Franco].

“It’s the perfect introduction to the late-’70s New York nightclub scene and the second chapter of our series,” Pelecanos added. “It was also a nod to one of my a favorite artists, often ridiculed by third-rate comedians. This was Barry’s breakup album, a disco-funk masterpiece, the pinnacle of his career. He could set fire to a bedroom and bring a grown man to his knees. Barry White was no joke.”