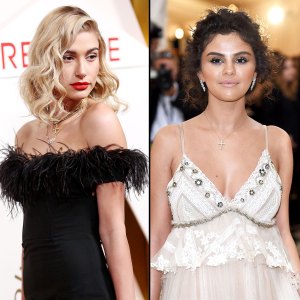 “Celebrating!!!” Stevens captioned a Polaroid with Gomez and their besties Ashley Cook and Courtney Lopez on Instagram Thursday, October 24.

Bieber, 22, “liked” the photo, which was taken at a party that Gomez’s friends threw for her after she dropped “Lose You to Love Me” on Wednesday, October 23.

The 27-year-old Disney alum revealed on Wednesday via Instagram Live that her friends planned a get-together to commemorate her return to music.

“My friends surprised me with this really pretty dinner and it’s happening right now and it’s really sweet,” Gomez told her fans on the social media platform. “It’s just the people that I love the most and we’re all just celebrating. My friends look super cute.”

Lopez later shared footage in a party bus with Stevens and Cook singing along to Gomez’s second new single, “Look At Her Now.”

This isn’t the first time that Hailey, who married Gomez’s ex-boyfriend Justin Bieber in September 2018, “liked” one of Stevens’ photos with the “Hands to Myself” songstress. Last month, the model showed support for Stevens’ Giving Back Generation series, which featured Gomez in the first episode.

”This episode is particularly special to me as Courtney, Sel, and Ashley have been my friends all through my 20’s,” Stevens captioned a photo of the four friends, which Hailey “liked” in September via Instagram. “We talk about what it means to support each other, forgive, and grow together. Look forward to hearing your feedback & hope it leaves you encouraged.”

Fans assumed their was bad blood between Hailey and Gomez after the latter released “Lose You to Love Me” on Wednesday.

“In two months, you replaced us / Like it was easy / Made me think I deserved it / In the thick of healing, yeah,” Gomez sings in the track, seemingly referring to Justin’s marriage to Hailey. “And now the chapter is closed and done / And now it’s goodbye, it’s goodbye for us.”

Shortly after the song dropped, Hailey shared a photo of a song titled “I’ll Kill You” via Instagram Stories. While social media users assumed she was reacting to the track, the Drop the Mic cohost shut down the speculation: “Please stop with this nonsense… there is no ‘response.’ This is complete BS.”

Gomez later encourage her fans to “be kind” on the aforementioned Instagram Live on Wednesday evening.

“I am grateful for the response that the song is getting. I’m so grateful,” the actress said. “However, I do not stand for women tearing women down. And I will never, ever be by that. So please be kind to everyone. It doesn’t matter what the situation is. If you’re my fans, don’t be rude to anybody, please.”

Gomez and Justin, 25, dated on and off from 2011 to 2014. After sparking reconciliation rumors in 2015 and 2016, Us confirmed that the twosome were back together in November 2017. Four months later, however, sources told Us that Gomez and Justin were on a “break.” They were over for good in May 2018. By July, the “Sorry” crooner was engaged to Hailey, whom he previously dated from late 2015 to 2016. The couple celebrated their one-year wedding anniversary with a second ceremony in September.