Collage made of screenshots from the videos of the “Numa Numa Dance” by Gary Brolsma, “Dragostea Din Tei” by O-Zone, and “Run away” by Sunstroke Project & Olia Tira. Fair use.

Few people would consider Moldova a music industry powerhouse. Tucked into a corner of Eastern Europe, most international news about it center around politics, usually to do with the fact that the country is sandwiched between the EU and the Russian zone of influence.

However, its pop music surprisingly managed to exit the confines of its national boundaries, and two popular memes known around the world are actually Moldovan in origin.

If you were online 15 years ago, you will certainly remember the Numa Numa Dance, a classic viral video of the pre-YouTube era. The grainy footage of the webcams of that time features a chubby young man lip-syncing to the song “Dragostea Din Tei,” by the Moldovan 2000s boyband O-Zone.

According to the video’s Wikipedia entry, the man was the American vlogger Gary Brolsma, who uploaded the video on the website Newgrounds under the username gman250 in December 2004. YouTube was founded two months later, in February 2005.

Within months, the video received millions of views. It was taken down in 2016, but not before copies were uploaded elsewhere and inspired dozens of spoofs.

Released in July 2003, “Dragostea Din Tei” became very popular around the world on the following year. Brolsma says he first found heard the song on a Japanese flash animation with cats.

And they can be translated as:

Along with the song, the Moldovan pop band released a music video that combined live-action with superhero comics-style graphics. During the following years, several labels around the world acquired the rights to the song, and versions of it were released in dozens of languages, such as English, Hungarian, Hebrew, Indonesian, Afrikaans, and Japanese.

Epic Sax Guy: To Eurosong and back

Another world-famous meme inspired by Moldovan pop is the “Epic Sax Guy.” It is a saxophone player swinging his hips to a catchy solo tune, and is based off the performance of the Moldovan entry on the 2010 Eurovision, the 60-year-old song contest that unites the continent every year through TV screens.

The song “Run Away,” by Sunstroke Project & Olia Tira, reached 22nd place in the 2010 competition, out of 39 participants. The official video on Eurovision’s YouTube channel has over eight million views. While the whole crew, outfitted in the style of 1980’s cyberpunk sci-fi, gave a memorable performance at that time, it was Sergei Stepanov’s passionate saxophone solo that stole the show. 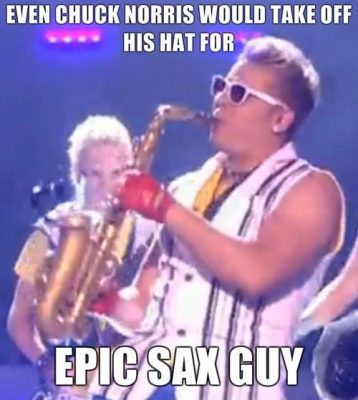 An example of use of Epic Sax Guy meme, by KnowYourMeme.com, fair use.

For years after, the “Epic Sax Guy” meme continued with a life of its own on the internet. It inspired countless cartoons and copycats. On YouTube, there are ten-hour videos of the looped sax solo, some of them with millions of views. People have participated in challenges created by influential YouTubers to watch these videos in their entirety.

It seems that the Moldovan music producers were aware of this collateral popularity. In 2017, the Sunstroke Project participated again at the Eurovision with the song “Hey Mamma,” renditioned with many of the elements of the Epic Sax Guy meme, including a new version of the sax solo.

The Sunstroke Project reached third place with their performance in the 2017 competition, the best result Moldova has ever achieved in the contest.

Where are they now?

While the world of memes awaits for Moldovan pop music to provide fresh inspiration, let’s take a look at what happened with the heroes of this story post-internet-fame.

According to Wikipedia, O-Zone split in 2005. Several of the band members reunited in 2017 for two concerts. The band’s official web-page at artists.universal-music.de/ozone has been removed, while their Facebook page has not been updated since 2012.

Gary Brolsma became an internet celebrity. His popularity increased with numerous appearances in US media. He was voted the Number 1 Internet Icon on the “40 Greatest Internet Superstars” by TV channel VH1, with the “Star Wars kid” coming second place. His next big year was 2008, when he published his first solo album and appeared in the South Park episode “Canada on Strike” as one of the internet celebrities waiting for their theoretical payments. YouTubers keep producing references and reactions to his video, which had become an icon of internet nostalgia.

The Sunstroke Project is still active — their official website is functional despite not bring fully up to date, so the best way to get the latest info on their activities is via their Instagram profile.

Olia Tira attempted to represent Moldova at Eurovision once again in 2014, under the stage name FLUX LIGHT, but didn’t qualify on the national contest. She continued her career singing in Romanian/Moldavian and Russian, and just around four months ago she released her latest single.