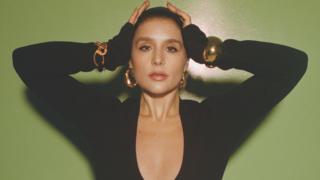 Jessie Ware: “For so long, I was scared and nervous”.

“They said I would have been burned at the stake. It’s the best quote I’ve ever had in my life.”

The singer, who shot to fame in 2012 with her Mercury-nominated debut album, is quoting a not-entirely-inaccurate review of her latest single, Ooh La La.

An irresistible slice of 80s disco-funk, its every line is a come-on, propelled by an impatient hopscotch bass line.

“It’s full of innuendo,” she laughs. “We were trying to find a way that we could get away with murder without it sounding completely filthy.”

It is certainly a departure from Ware’s last album, Glasshouse, where she wrote about meeting and falling in love with her partner, Sam Burrows, a personal trainer, and her struggles as a new mother.

Released in 2017, the record earned her a Brit nomination for best female, but sales were underwhelming and an appearance at the Coachella music festival went so badly that her mum advised her to quit music altogether.

By that point, the pair had started a hugely successful podcast, Table Manners, in which they cook a meal for a celebrity guest, while giving them a grilling of their own.

Listening to an episode feels like eavesdropping at a family dinner party: Jessie and Lennie bicker and tease and resurrect embarrassing memories, but their affection for each other shines through.

“We’re quite a loud, emotional family,” Ware concedes. “There’s no secrets, there’s not that much politeness, we’re quite dysfunctional but it works.”

Fans have devoured the show’s hilarious, zero-filter conversations with an appetite to match guest star Ed Sheeran, who ate “four helpings of sausages” during his appearance.

Ware, in particular, has a knack for drawing candid confessions from her guests.

“People always confide in me very quickly,” she says. “I always seem to be that person that somebody’s telling their life story to in the toilet at a party.

“And I’m always quite up for it: I just kind of put my claws into other people and suck the life out of them.”

The podcast has now spawned a cookbook and a live show – and the success gave Ware room to re-evaluate her musical career.

“This album was pure escapism: Let’s fantasise, let’s do everything faster and sexier and naughtier.”

Pulse-quickening title track What’s Your Pleasure is a breathless update of Donna Summer’s Love To Love You Baby; while Save A Kiss sizzles with sensuality. “You’re always striking the match,” she sighs, “And I think I’m gonna burn now.”

“It’s fun playing the temptress, because that’s so not me,” Ware laughs. “But I want my nightlife to to be like What’s Your Pleasure.

“I’m longing for that: A bit of a night out and touching and speaking intimately to each other. Maybe meeting a stranger and not having to deal with the people you’re living with for a night.

“This is what’s so funny. I’ve written this record that’s total fantasy, because my nightlife is dealing with two kids between 2am and 5am, and them having a frickin’ party but my husband and I just being like, ‘Jesus Christ, go to sleep’.”

But the album isn’t just about good times. The album closes with a stunning, baroque-pop symphony, Remember Where You Are, that laments the divisiveness of modern politics.

“The heart of the city is on fire,” she observes, as a choir pleads: “Can’t we keep loving, on the edge of doubt?”

The song was written in a moment of despondency last summer.

“Trump was in town, Boris had just got elected and it felt like a bit of an [expletive] show,” says the singer, who’s a staunch Labour supporter. “It felt like us acknowledging the state of what’s going on – and that a bit of intimacy and love can always work a treat.”

The sound of the song was inspired by the spiritual optimism of 70s soul tracks Les Fleurs (by Minnie Ripperton) and State Of Independence (Donna Summer).

“We were totally trying to do Les Fleurs,” says Ware. “We wanted it to feel like an overture. For it to be a group vocal but to be sung with drama.

“I’m so proud of that song. I want it to be at the end of an episode of Handmaid’s Tale. I think it’s good enough.”

The singer put her activism into practice last week, attending several of the Black Lives Matter protests in London, an experience she calls “incredibly powerful and peaceful”.

“There was a strong sense of solidarity – but also of young voices really commanding our attention and leading the chants. I thought that that was really inspiring. It was the youngest protest I’ve ever been to.”

Ware later decided to push back the release of her album, after discovering its release date, 19 June, coincided with Freedom Day, which celebrates the freedom of enslaved people in the US.

“It’s an incredibly important day for black voices, and I don’t want to distract from those voices or those experiences or stories in any way,” she said in a video posted to her Facebook page.

It’s the sort of public stance she might have avoided in the past but, over the last three years, Ware says she’s grown more at ease with being herself.

The star is embracing the fun side of her new album

“For so long I was so scared and nervous,” she says. “Like on the first album, I dressed up to hide myself. I’d have my hair done and my power suit, and it was all about trying to make me feel more confident.

“I even hid my ‘big voice’ on the first record because I didn’t particularly want to show it off. But then I worked with [producer] Benny Blanco who was like, ‘You’ve got a voice, sing out a bit more,’ so I did a song like Say You Love Me.

“This time I’m going back to this hushed voice – but it’s so much more controlled and decisive. And now, playing dress-up is just for sheer fun, because I guess I’m not so nervous anymore.”

It was the podcast that allowed her to be herself. It might even have forced her hand. After all, it’s difficult to convey a sense of mystique when you’ve been publicly berated by your mum for not showering.

“I don’t feel like I need to prove anything any more,” says Ware. “I feel very comfortable and confident.”

You can see it for yourself in the playful TV performances she’s staged during lockdown – dancing around her daughter’s bedroom, illuminated by a set of disco lights she’d borrowed from Nick Grimshaw.

“I wanted people to be sweaty in a club when they heard this record, and this is not how I imagined it coming out at all,” she says.

“But you know what? The whole premise is that it’s fun and it’s fabulous and it’s fantasy. So why not have a disco ball and flashing lights and a smoke machine?

Jessie Ware’s album, What’s Your Pleasure, will be released on 26 June and she will tour the UK next April.