As ever, Paul Feig, who “likes to mix and match” as he puts it, is dressed in a Ralph Lauren jacket, part of an Anderson and Sheppard suit, and looking as dapper as anyone could possibly be. Wait. there’s a Christmas-themed corsage. So more dapper than that.

He’s as gentlemanly as his attire suggests. In the days leading up to our interview, he has responded gallantly to any bad reviews aimed at Last Christmas, his eighth film as director. “As a lifelong Rolling Stone reader, I sincerely thank you for your opinion,” he tweeted at the iconic rock magazine after their one-star review appeared under the headline “There are godawful holiday movies… and then there’s Last Christmas.”

“We can’t win everybody over,” continued Feig. “But we will continue to try. I swear all of our hearts were in the right place. Can our one star at least be a really, really big star?”

Goodness knows Feig is accustomed to the slings and arrows. The last time we spoke, it was just ahead of the release of his 2016 Ghostbusters reboot, a film that inspired, even ahead of release, some of the worst examples of toxic masculinity witnessed on social media, especially those reactions aimed at the film’s African-American cast member, Leslie Jones.

Emilia Clarke and Paul Feig: ‘The minute she walked in the room, she was so charming and funny.’ Photograph: Tolga Akmen/AFP

The controversy rumbles on. When Jason Reitman’s 2020 version was announced, Feig felt rightly obliged to respond. “An absolute honest to God never-ending supply of bullshit and hate from these trolls,” he noted on Twitter, in reference that racist abuse that Jones continues to receive. “Leslie spoke her truth and I support her. I am very open to Jason’s new version of GB but am also sad that our 2016 team may not get to bust again. We all are. We’re forever proud of our movie.”

Last Christmas has been called “so much glitter on cheap plastic” (Arizona Republic), “about as buoyant as leftover eggnog” (Associated Press) and “painfully predictable” (Washington Post), but there’s nothing to compare to the comments that saw alt-right icon Milo Yiannopoulos banned from Twitter for life for his role in the dog-piled abuse of Leslie Jones.

“No, this is more standard criticism,” cheers Feig. “It’s more that the critical crowd don’t like these kind of movies. It’s kind of funny for me. The movies that are just made to make everybody feel good take the biggest hits. But that’s okay. Critics have been very kind to me throughout my career. If you get hung up on that, you will make yourself sad.”

Last Christmas, which was co-written by Emma Thompson, is, simultaneously, a tribute to the Love Actually fanbase and to the music of the late George Michael. That latter aspect was, according to Feig, an idea that evolved from a conversation between Thompson and Michael before his death. Fans should note: there is no Careless Whisper and, even more surprisingly, the film almost didn’t include its star Emilia Clarke singing the title tune.

“I felt the responsibility of George’s music. I mean, every movie has the pressure of hoping I don’t make a bad movie. And the George content grew very organically,” he said.

“At the start, the movie was not really a George Michael movie at all. The title was based on the song and Emma had written into the script: so this is a great place to play George. So his DNA was in there all along but not in any kind of meaningful way.

“Then the estate had us come in and watch a two-hour version of the documentary that he had directed. I only knew some of the hits. I didn’t know Heal the Pain. I didn’t know Playing for Time. And I thought they should be part of this. Because this movie could be called Heal the Pain.

As a lifelong @RollingStone reader, I sincerely thank you for your opinion. We can’t win everybody over but we will continue to try! I swear all of our hearts were in the right place. Can our one star at least be a really really big star? 🌟😃❤️ https://t.co/H2xyG8BN7X

“So we thought: maybe we should make her a George Michael fan. In order for the studio to allow us to go into production so we had to make a deal for five songs. But when I got into post-production those five songs didn’t feel like enough and suddenly the movie started begging for more.”

The estate agreed and allowed Feig to use a total of 15 songs, including an unreleased song called This Is How (We Want You to Get High) that plays over the movie’s credits.

Last Christmas may look a straightforward romantic comedy starring the charming Emilia Clarke and Henry Golding as the central meet cute couple. But by the time the trailer was released, social media detectives noted that there was a crucial plot twist coming. We’ll say no more. 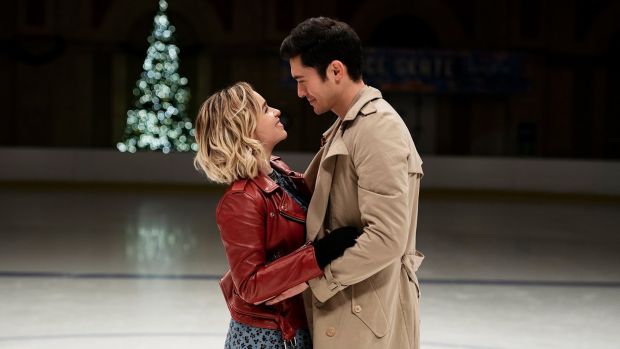 “It was a trailer for a rom-com and people tried to analyse it like it was The Matrix,” says Feig. “I’ve never seen anything like it. For some reason with our movie, all these critics and commentators felt like they could spoil us, because they think: clearly everybody figured it out from the trailer, so here’s the spoiler.

“But I’ve been seen this movie with so many people and nobody knows the twist unless someone has already told them online. I love twists. There’s nothing I love more as an audience member. Why not let people enjoy things?”

Last Christmas represents a reunion between Feig and Golding, who worked together on last year’s A Simple Favour, and it is the first post-Game of Thrones turn for Clarke, whose final episode as Daenerys Targaryen proved an acquired taste.

“I met her four years ago when we had a general meeting,” says Feig. “I had this preconceived notion of what she would be like, which is very weird because I’m a director, I’m in showbiz and think she must be like she is in Game of Thrones. When I meet people I’m always wondering if they have a sense of humour and whether or not I want to work with them depends on that.

“With Emilia, I had the same thing I had with Jason Statham. I’m thinking this is going to be really tough and scary. And the minute she walked in the room, she was so charming and funny. So then it became my quest to show that on the screen.”

Feig says shooting around Christmassy London last year was like “professional film school” but he loved it. As we speak, he has just received a five-year visa and Laurie Karon, his wife of 25 years, is looking at properties. So he isn’t as alarmed by Brexit as the Last Christmas script, which was co-written by Emma Thompson, seems to be?

“But hey, we are stuck with Trump on our side of the Atlantic,” he laughs. “There is no safe harbour these days.”

Interestingly, Feig has directed Trump for a Macy’s commercial in 2010.

“Isn’t that weird?” he says. “It’s very weird. It was right before Bridesmaids. I was doing a series of internet commercials for Macy’s and I did five or six different ones, each with a person who had a deal there. So one with Martha Stewart, one with Tommy Hilfiger and one with Trump. He was fine. We were just kind of making fun of them and he had a sense of humour about himself.

“The thing we did had these kids with a bake sale starting to dress like him and act like him. He’s nerve-wracking to work with because he has a very weird energy about him. But who could have known?”

The $288.4 million-grossing Bridesmaids ushered in a series of hits made with Melissa McCarthy, including The Heat and Spy

Post-Trump, Bridesmaids changed everything for the director. He had already scored a cult following among Sabrina the Teenage Witch fans as Mr Pool and a TV cult with Freaks and Geeks, which launched the careers of James Franco, Seth Rogen and Jason Segel. The latter’s cancellation in 2000 is still a sore spot for executive producer Judd Apatow. “Everything I’ve done, in a way, is revenge for the people who cancelled Freaks and Geeks,” Apatow told Variety in 2014. Feig, the show’s creator, is a little more circumspect.

“Judd really shepherded those guys after Freaks and Geeks into movie stardom,” says Feig. “I wasn’t happy that they cancelled us, by any means, but I think I understood more. We had such low ratings. We were an expensive show show and nobody was watching us. The irony is that when we got cancelled we had seven million loyal viewers every week. That made us the lowest-rated show on TV. And now that would make us the highest rated show on TV.”

Feig had to weather several “years in movie jail” as he puts it, after I Am David (2003) and Unaccompanied Minors (2006) failed to make a splash at the box-office. But the $288.4 million-grossing Bridesmaids ushered in a series of hits made with Melissa McCarthy, including The Heat and Spy.

“We love each other and will figure out something to do again,” says Feig. “But honestly, all the movies that Melissa and I did together, none of them were planned. With Bridesmaids, she was one of the last people who came in. Spy was written for somebody else who didn’t want to do it. And for Ghostbusters I had a million different names and it was only after we started talking, I thought: this is crazy you should be in it.”

Next up for Feig is Dark Army, a Bride of Frankenstein-inspired movie from Universal’s rebooted (and re-rebooted) Dark Universe imprint.

“You know me; I love my genre.” says Feig. “I did love the bits of scary stuff we did for Ghostbusters. And I’m also a huge fan of the old monster movies. I’m not a horror fan. I don’t like slasher movies. There’s something about knives on skin I can’t watch. But I’m thinking like Freaks and Geeks. Putting extreme personalities in real situations. Just misunderstood outsiders. I love the James Whale films because they are scary and campy. So that’s what I was to do.”

Last Christmas is on release