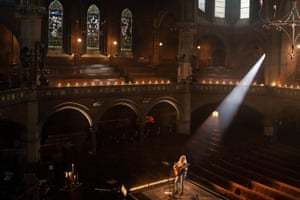 After three months of shuttered concert venues, hearing Laura Marling’s voice eddy around the Union Chapel in north London is like being dosed with a vitamin I had been leaving out of my diet. It’s almost like hearing live music for the first time; a different kind of beauty than you get on a daily walk or a drive to a castle, something vividly real but constantly evaporating into the air.

Aside from 25 production staff, there’s almost no one else in the venue for this concert, which is being streamed online as one of the first fully realised gigs since the arrival of coronavirus. Backed solely by her acoustic guitar, Marling plays one set for the UK in the evening and a later one for a US audience. She is recorded in crystal clarity and filmed on three cameras, two of them roving around and approaching her, capturing the changing weather across her face.

There have been plenty of free lo-fi performances by stars on Instagram during lockdown, or charity initiatives such as Together at Home, but Marling’s concert is the next step for a live music sector flailing for its previous levels of artistry and revenue: £900m losses are predicted for this year in the UK. The event is ticketed at £12 or $12 a stream, and while her manager won’t give me exact numbers, he says more than 6,000 have been sold. Michael Chandler, the chief executive of Union Chapel, says events such as this feel like “a glimmer of light” for a shuttered venue that, with two-metre social distancing, could only accommodate 84 of its usual 900 capacity.

“I loved it,” Marling says between her sets, relaxed and happy. “I love the weirdness of the intensity of playing live, and that was a totally uninterrupted version of it. I don’t have to take a break and say something awkward – banter doesn’t come naturally to me.”

Marling superfan Mitchell Stirling, who watched the livestream at home and has seen her 32 times before, concurs. “Laura’s never one for onstage banter, so you’re not missing out on that kind of thing,” he says. “It was a strange hinterland between being at an intimate concert and watching a DVD, but it was excellent.” Another fan, Hannah Gallagher, says it was “gorgeous, and the production values were incredible. She doesn’t need to pull out many tricks, and that translated well. Me and my boyfriend WhatsApp-called each other while livestreaming the concert on our laptops; he put his phone up next to him so he could turn to me as if he was standing next to me at a gig, which was really nice.”

The livestream’s director, Giorgio Testi, says it is “a dream come true, because you can capture the beauty of the venue and the artist without ruining the experience for people watching in a crowd. My job can become even more creative.” He aimed for “something extremely cinematic”, using ambitiously long, unbroken shots to help immerse everyone watching at home, and says this approach demands an artist of Marling’s calibre. “It brings back the importance of being a very good performer, because you can’t hide. Either you can do it, or you shouldn’t show up on stage.”

The chat-averse Marling doesn’t acknowledge his cameras’ presence, but says there is potential for other performers to play around with them. “The ability to think up a persona with that level of intricacy is actually really hard, and that doesn’t come naturally to me, either. My persona, I guess, is holding on to intensity for as long as I possibly can. For other people, it’s more theatrical, and that could be an amazing extra quality to this new normal.”

The hope is that this could become an entirely new ticketed format to match the success of livestreamed theatre and opera performances, with the strictures of coronavirus forcing people to embrace the idea. Audiences who live too far from a touring route could get to experience a performer at close quarters, and as Hannah says: “There was no one putting their phones up and blocking your view; there was guaranteed clarity. And you don’t have annoyances like toilet breaks.”

But even if there is scope for experimentation and theatricality, as well as a financial lifeline for venues and artists, something is lost by not having an audience there. It is eerie to watch Marling sing to cameras and empty pews, like a dispatch from a secure bunker to the survivors of an apocalypse outside.

There’s a spontaneity to a live audience, they become an energetic force in themselves. They could turn on you

“There’s a spontaneity to a live audience, they become an energetic force in themselves,” says Marling. “They could turn on you, if they wanted to.” As with her Union Chapel sets, she began each show of a recent Australian tour with an interconnected suite of songs, “this long song which makes people zone out a bit, in a nice way. I never look at the audience when I play that song. And at the end, I bend down to touch the tuner, and there’s a row of people right in my face who I’m seeing for the first time. They tend to be women about my age. To look someone in the eye who is having a really intense experience, that has a real effect on me.

“It feels like my fanbase are like me, ish; whether they’re male or female, they have a similar emotional landscape. They’re not adoring, they’re connecting. I don’t think people put me on a pedestal, I think they see me as somebody who is articulating something for them that they’ve experienced. I find that quite moving, and overwhelming. Something about being really intensely watched puts you in a different mindset; it is like a fuse being lit.”

Something is lost for the audience at home as well. “I did miss the crowd,” Gallagher says. “It’s nice to see how people react when a song comes on that they really enjoy. Watching Laura at Glastonbury, it was Nothing Not Nearly; the girls beside me loved it too, and I got really emotional and swept up in it.” Marling’s team tell me plans are afoot for an optional chat function in future streams, but you can never engineer the shared frisson that ripples through a crowd.

As well as the management company Marling is signed to, which is planning similar gigs with Sleaford Mods, Jack Garratt and more, there are a huge number of other initiatives trying to conjure that frisson nonetheless. Neo-soul singer Erykah Badu has created her own streaming platform, recently reasoning: “I could directly do business with the people I am serving, it’s a magnificent feeling.” Meanwhile startups such as Maestro, Side Door and Release Party offer ticketed livestream services if you don’t want to build one yourself. With Glastonbury long since cancelled, its Shangri-La area will recreate its cyberpunk raves in a 3D virtual reality setting in July, with sets from Fatboy Slim, Carl Cox and more accessed via computer or smartphone; Tomorrowland, one of the world’s biggest dance festival brands, will attempt something similar the same month. 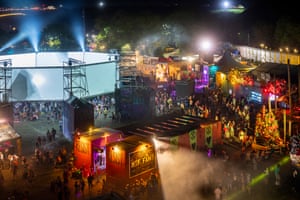 Shangri-La at Glastonbury 2019 – the area will be recreated digitally this year. Photograph: David Levene/The Guardian

In the real world, club promoters have attempted socially distanced raves in forests, drive-ins or with dancers fenced off from one another with hazard tape. Another ambitious project is One Night Records, a venture launching in October from Tim Wilson, who has worked with immersive cultural brands such as Punchdrunk, Secret Cinema and Vault festival. It is, he says, a theatrical trip “through the birth contractions of modern music” with blues, ragtime and New Orleans jazz being performed across seven areas in a 30,000-sq ft space, to households of four people socially distanced from other groups. At £202 for each household, it is pricey, just like one recent socially distanced club night in Germany, which cost €70 (£63) a ticket. The worry is that live music will become an elite pastime during coronavirus.

“It’s not cheap,” admits Wilson. “But it’s also the only gig in town, and it’s a lot of content for £50 a person; you’ll be seeing 15 to 18 musicians a night in lots of different iterations.” He argues that as lockdown restrictions start to lift, festival promoters should be planning this kind of small-scale, truly live event. “I think congregating a couple of thousand people in a large space in the countryside and marshalling it properly, it doesn’t sound too difficult an operation to me.”

Audiences and cash-strapped artists will be eager for that kind of scaled-back operation, as well as livestreams, even if they aren’t a complete replacement for the live scene of old. Marling says lockdown is “anxiety-making. A year and a half’s worth of income has gone. And this [livestreaming] won’t solve it, because it’s not totally financially viable; it’s quite a production to put on.”

However the finances shake down as this new format finds its feet, Marling’s stunning performance, captured with startling intimacy by Testi and his team, is the perfect proof of concept. As she sings on Daisy, standing in the heart of the empty church: “Woman alone is not a woman undone.” I try to cling on to every upward-fading note, not knowing when I might hear them next.