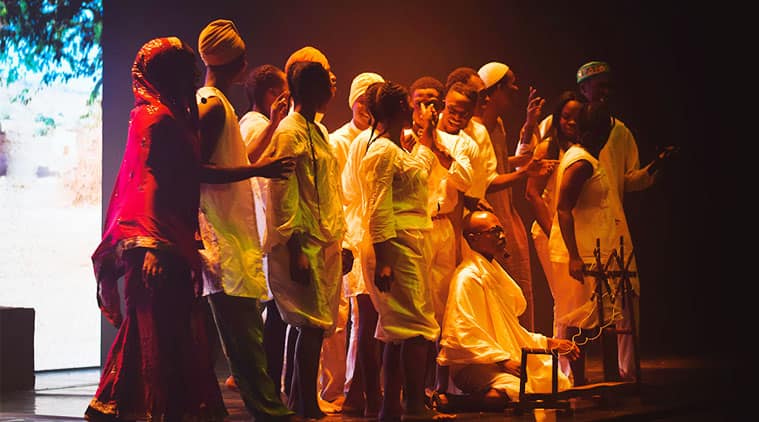 Lightyear Productions flagged off the event with “Gandhi: The Musical” and staged eight shows in Lagos over the long Eid weekend, or Barka da Sallah as it is known here.

As India readies to celebrate the 150th birth anniversary of Mahatma Gandhi on October 2 with a series of programmes, in faraway Nigeria, a local theatre group is trying its best to commemorate the occasion with a six-month festival.

Lightyear Productions flagged off the event with “Gandhi: The Musical” and staged eight shows in Lagos over the long Eid weekend, or Barka da Sallah as it is known here. The festival was supposed to include a symposium, an art exhibition, an Indo-African fashion show and a march for Chibok girls. Despite being such a unique project, the producers of “Gandhi: The Musical” are struggling for finances. Though a few corporates and individuals did come up with support, it wasn’t enough to stage all eight shows smoothly.

After the musical enthralled, moved and left people in Lagos awestruck along with high-ups at High Commission of India, the theatre group was invited to stage the show again on the International Day of Non-Violence. But the fund-crunch might put curtains on that too.

The secret of the show’s success could be the fact that the actors could relate to their characters.

“We won’t sit back. Although things are not going as per plan, we will reschedule it. We will try again next year. We will approach the corporates again in November and December so that they can allocate some funds for us in their next fiscal calendar,” said Ovosa Precious Oroye, who goes by the stage name Woody Lightyear, the founder of Lightyear Productions and the brain behind the project.

But Oroye’s eyes lit up when talking about the play. “I knew that Nigerians hardly know about Gandhi, but they love entertainment that’s why turning his story into a musical made much more sense,” he disclosed. The colourful musical was put together by a group of 60 theatre artistes from Nigeria and India. Forgetting their race and ethnicity, the team came together to celebrate the life and teachings of Mahatma Gandhi.

The musical, full with songs like “Deva Shri Ganesha” and “Ae Mere Watan Ke Logon”, highlighted all the important events in Gandhi’s life from him being thrown out of a train in South Africa to him burning western clothes and the shock of the Jallianwala Bagh massacre. It captures the essence of his life while making sure the audience remains engrossed, with beautiful music, impeccable dance moves and the magic of lights.

The music has been set by composer Tenniola Owoeye along with her star singer Fawaz Oyebode.

The secret of the show’s success could be the fact that the actors could relate to their characters. “I feel very close to Gandhi. Like he didn’t differentiate between castes and religions. I come from a mixed family and I understand the meaning of equality,” said Moshood Fattah, who played the pivotal role of Mohandas Karamchand Gandhi.

While all other stage artistes were Nigerians, the Indian mother-daughter duo of Palna and eight-year-old Vaidehi Parikh too put their best foot forward. “I went for the auditions for Vaidehi as she loves singing and they asked me if I would be interested in working too. I love dancing and have been a part of the Garba group… I thought if Nigerians can do so much for our Father of Nation, I can give it a try as well,” the mother declared.

The music has been set by composer Tenniola Owoeye along with her star singer Fawaz Oyebode. “We couldn’t afford to have pronunciation slip-ups since we were expecting Indian audiences too and Palna was my go-to person any time we got stuck,” said Owoeye, who as a choral director made her musicians and singers practice constantly. “It was tough, especially singing songs in a language that we didn’t understand. But hard work paid off and the cheering crowd was a blessing,” added Oyebode.

The musical captures the essence of Gandhi’s life while making sure the audience remains engrossed, with beautiful music, impeccable dance moves and the magic of lights.

Oroye now wants to look at crowd-funding. “Gandhi’s values and teachings are still relevant if we want to reorient our values and raise awareness in peace-building activities and non-violence in tackling various problems that ail our society today.”

Charu Rishi is a former Indian journalist now based in Lagos.