The journey began a little more than a decade ago. In February 2009, Coleman Mellett leaned over in a car and kissed his wife, Jeanie Bryson, just outside Newark Liberty International Airport. He told her he loved her, a moment she holds onto as a gift, then left for a flight toward Buffalo and a performance of unique family meaning.

At 34, he was a guitarist for composer and musician Chuck Mangione, whose band was set to play the next evening with the Buffalo Philharmonic Orchestra at Kleinhans Music Hall. Coleman’s parents, Mary Ellen and Ken, met as college students in Buffalo. Mary Ellen is a Bennett High School graduate whose dad ran a business that imported beer from Canada, including well-loved Old Vienna “splits.”

Like countless others raised on the Niagara Frontier, she grew up understanding the magnitude of Kleinhans, where so many renowned musicians have performed. Mary Ellen and her husband planned to travel from their Virginia home to see Coleman on that stage, joined in the audience by his grandmother and others from their family.

“This was a homecoming,” Mary Ellen said. “We were all going to the concert together.”

Instead, they became part of a stunned pilgrimage toward dark smoke, rising from Clarence Center.

Mellett and Gerry Niewood, who played flute and saxophone for Mangione, were two of the 50 people who died on Feb. 12, 2009, when Continental Connection Flight 3407 crashed into a Long Street home.

For Bryson and everyone who loved her husband, it was unbearable to think of how a brilliant young musician, on his way to a triumphant performance in the city where his parents met, was abruptly silenced before his formidable skills had even reached their peak.

Friday, Mellett’s parents – joined by many friends and relatives who would have been at the Kleinhans show – will finally see and hear him perform in Western New York.

Family tragedy turns NFIFF into a film festival ‘with a cause’

Earlier this year, Bryson and Zeb Mellett, 42, Coleman’s younger brother, completed work on “Sing You a Brand New Song: The Words and Music of Coleman Mellett.” It screens at 6 p.m. Friday at Regal Cinemas Hollywood 12 on Builders Way in Niagara Falls as part of the Niagara Falls International Film Festival, only the third showing of the documentary since its release in June.

The film, narrated by singer and songwriter Michael McDonald, includes appearances by Mangione, James Taylor, bassist Will Lee and drummer Steve Gadd, and documents the painstaking work of producer Barry Miles and engineer Ron DiCesare. They went into Mellett’s laptop and built fragments of his music into an album, expected to be available this year.

“It was a jigsaw puzzle, really, putting it together,” Miles said Wednesday. He and Mellett began collaborating on a few ideas in the weeks before Flight 3407 left for Buffalo. Mellett was a guitarist “on the brink,” Miles said, a musician of “limitless potential.”

Rather than despair, Miles sees the film as a statement of hope, a point emphasized by Bryson and Mary Ellen Mellett.

“I think he’d be smiling,” Mary Ellen said of her son, “and he’d be grateful.”

The film chronicles the romance between Mellett and Bryson, a jazz singer and daughter of songwriter Connie Bryson and the late Dizzy Gillespie, a jazz pioneer. She and Mellett met by chance when they performed in a 1996 jam session as part of the Cape May Jazz Festival.

Bryson was impressed “by his soulfulness and his demeanor, a polish that seemed beyond his years.” Three months later, she asked Mellett if he would join her on guitar while she did some performances along the East Coast.

Aviation safety in the U.S. is the legacy of Flight 3407

During long car rides between shows, they began to realize they saw their music and the world in a similar way. Before long they were a couple, a romance at the core of many of Mellett’s songs.

In 1999, as the film recounts, Mangione’s wife Rosie turned on the television on a sleepless night and happened to see Mellett performing on community access television in New York City. Startled by his skill and technique, she told Mangione, “I found you a guitar player.”

He was skeptical, but invited Mellett for an audition. The young guitarist arrived ready to play many Mangione standards. At the end of the session, he had a new job.

By Feb. 12, 2009, Mellett already had released a solo acoustic album – and was embarking on an even more ambitious project – when he boarded Flight 3407 for the Mangione show in Buffalo. That night, Bryson was on the phone with a friend when she heard reports about the crash from her television.

She dropped the phone, ran to the screen and “saw an image of a fireball.”

In the quiet days that followed, Bryson – overwhelmed by disbelief – would take their dog Georgie for long walks in the middle of the night. “He had been writing songs for 10 years,” she said of her husband, and she knew he left the essence of his dreams buried on files, somewhere in his laptop.

The result was the communal effort, recounted in the documentary, to elevate those songs into one cohesive album.

“We are reluctant filmmakers,” Zeb Mellett said. “It took 10 long years to get to this point, but the question is, how long should it take? I think maybe deep down there was a part of us that didn’t want it to end.”

He hopes the film opens a door, that it ignites new interest in his brother and his music.

In June, Zeb and Bryson brought their documentary to the New Jersey International Film Festival, not that far from where Coleman climbed onto the plane. Zeb said there is equally high emotion about showing it near greater Buffalo, both the site of the crash and the childhood home of their mother.

The film was passed up by next month’s Buffalo International Film Festival, Bryson said, and she remains thankful it was accepted in Niagara Falls.

“This is not just Coleman’s story,” Bryson said. “It shares his gift and represents the gifts of everyone on the plane, and that’s why it’s so important, on so many levels, in Western New York.”

She spoke with gratitude of the support of Coleman’s parents. Bryson praised their tireless work on behalf of the Flight 3407 families, who – sickened to learn the pilots on the flight were overworked, undertrained and exhausted – successfully campaigned for far more rigorous airline safety standards.

Many in that group, friendships joined by loss, told her they intend to be at Friday’s screening. As for Zeb, he said that he, Coleman and Brady, their younger sister, routinely made youthful visits to this region, with their parents. The family often stayed in a cottage near Lake Erie. The kids grew to love the old Crystal Beach amusement park. 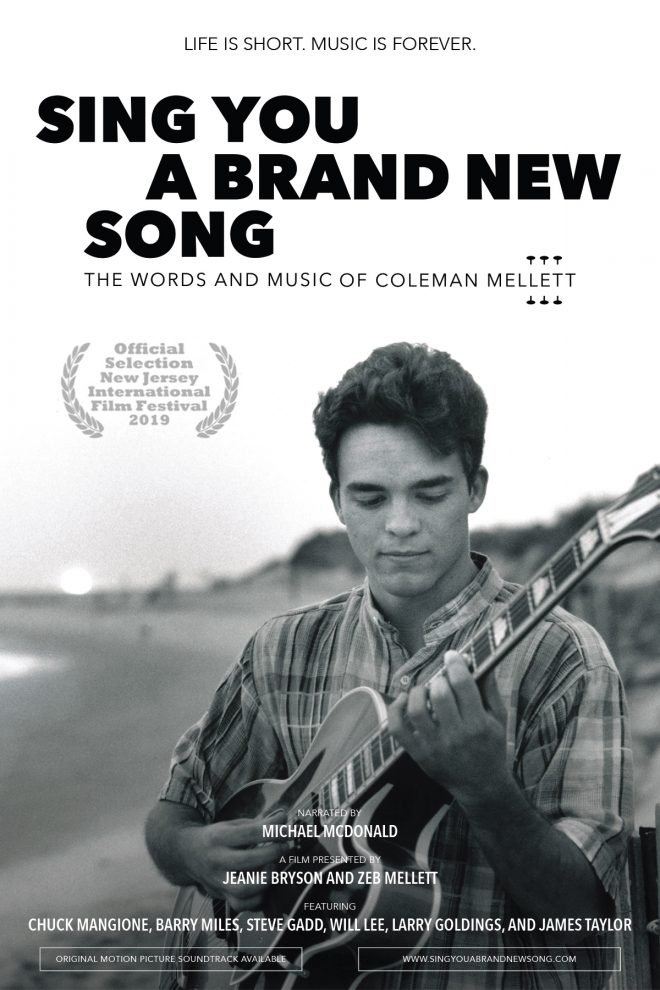 The poster for “Sing You a Brand New Song,” a documentary about the life, love and work of Coleman Mellett. (Courtesy Jeanie Bryson)

Mary Ellen Mellett said Coleman picked up his first guitar when he was 7. He embraced the instrument with “ambition and attention to detail and intensity,” Mary Ellen said, discipline that only became stronger as he grew older.

She called it “remarkable, even unimaginable,” that Zeb and Bryson stayed with the project for a decade, despite their grief. The ultimate joy for any parent is watching a daughter or son prosper at skills they love, and Mary Ellen was thrilled 10 years ago at the chance to see Coleman bring his passion to the stage at Kleinhans.

A decade later, she and Bryson turn such faith toward the creed that Miles, the producer, poured into Coleman’s work.

Sean Kirst is a columnist with The Buffalo News. Email him at [email protected] or read more of his work in this archive.