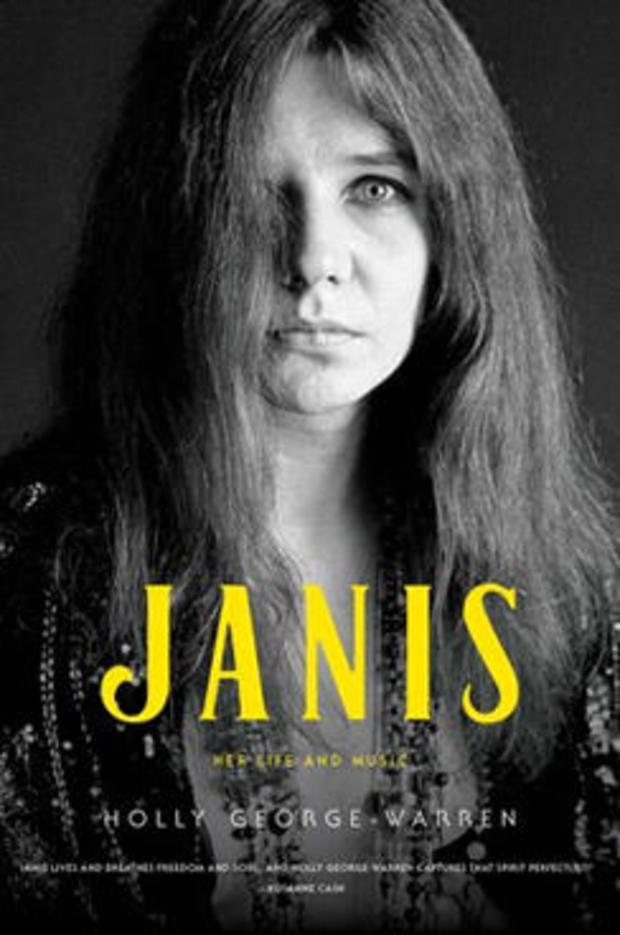 Music journalist Holly George-Warren’s biography of rock and blues singer Janis Joplin (1943-1970), “Janis: Her Life and Music” (published by Simon & Schuster, a division of CBS), explores her trailblazing career and distinctive art, which was ground-breaking in its rebelliousness and assertions of female power and individuality.

Don’t compromise yourself. It’s all you’ve got. —Janis Joplin

It’s a steamy September night in Nashville, and Ruby Boots is tearing it up onstage at the Basement East, thrashing her electric guitar and belting Janis Joplin’s “Piece of My Heart.” The 2018 edition of the six-day Americanafest, an annual music conference and festival, is honoring albums from 1968, and Big Brother and the Holding Company’s breakthrough, “Cheap Thrills,” has made the cut. Boots, born Bex Chilcott in Perth, Australia, fell in love with Janis’s music as a kid growing up on the other side of the world, the irresistible, aching soul in Janis’s voice undiminished by time, distance, and even mortality. As when Janis herself unleashed this tune fifty years ago, the crowd—wired into its raw but fearless humanity—pushes toward the stage.

At the Americana Honors & Music Awards Show held at the Ryman Auditorium (former home of the Grand Ole Opry), numerous Janis acolytes take the stage: singer-songwriter-activist Rosanne Cash, a Janis fan since her teens, wins the Free Speech in Music Award; Alberta, Canada, native k.d. lang, who went public as a lesbian in the 1980s, gets the Trailblazer Award. Formidable singers Brandi Carlile, Margo Price, and Courtney Marie Andrews—all nominees for various honors—signal Janis’s influence in their blazing performances. Prior to Janis Joplin’s all too brief time in the spotlight, these artists would have been hard pressed to find a female role model to compare with the beatnik from Port Arthur, Texas. The mix of confident musicianship, brash sexuality, and natural exuberance, locked together to produce America’s first female rock star, changed everything. As such, Janis still holds sway over multiple generations, artists of countless genres, across the gender spectrum. And although her bookishness, sharp intellect, and deep desire for home with the requisite white picket fence were not at the forefront of the identity she crafted for her fans, those parts of her also informed her every move.

The same could be said of her pioneering instincts. While Janis’s era is largely considered a time of release from the strictures of the 1950s, rock was, in fact, almost exclusively a boys’ club, and Janis suffered appalling sexism, from both the mainstream and counterculture press, and cold, occasionally cruel dismissiveness from industry pros. Yet she blazed on. Through force of will and unprecedented talent, she showed how rock could include unapologetic women musicians, writers, and fans. Feminist Ellen Willis, a New Yorker music critic in the 1960s, called Janis “the only sixties culture hero to make visible and public women’s experience of the quest for individual liberation.” Patti Smith, Blondie’s Debbie Harry, Cyndi Lauper, Chrissie Hynde, the B-52’s’ Kate Pierson, and Heart’s Ann and Nancy Wilson are among the artists who experienced Janis firsthand. They began to breathe in the possibility of their own futures. When Stevie Nicks was inducted into the Rock & Roll Hall of Fame in March 2019, she said that playing on a bill with Janis in the 1960s transformed her: “Her connection with the audience was so incredible that I said, ‘I want to do what she did.'”

Through her influence and her own enduring work, Janis Joplin remains at the core of our music and culture. As we look back at pivotal moments in 1960s rock history, she is usually there: the Monterey Pop Festival; the vibrant Haight-Ashbury scene in San Francisco; the streets, clubs, and studios of gritty New York City; Woodstock. She’s been feted at museum exhibitions and the subject of theater productions and films. Her first solo album, the eclectic, daring departure “I Got Dem Ol’ Kozmic Blues Again Mama!,” sounds as fresh today as upon its 1969 release. Her Monterey Pop performance, documented by filmmaker D. A. Pennebaker, still brings wild applause from a new generation of audiences at screenings, and with YouTube views in the millions and counting.

When Janis hit the Monterey stage in June 1967, few outside San Francisco knew her name. “What is this girl all about?” Monterey coproducer Lou Adler wondered. “Where did she come from, looking like that and leading this all-male band?” Offering a clue, Haight-Ashbury impresario Chet Helms introduced her onstage: “Three or four years ago, on one of my perennial hitchhikes across the country, I ran into a chick from Texas by the name of Janis Joplin,” he told the unsuspecting crowd. “I heard her sing, and Janis and I hitchhiked to the West Coast. A lot of things have gone down since, but it gives me a lot of pride today to present the finished product: Big Brother and the Holding Company!”

Janis’s astonishing performance that day would change her life—and the future of popular music. By the time the five-song set ended with her dramatic reinvention of R&B/blues singer Willie Mae Thornton’s “Ball and Chain,” thousands of mind-blown fans—and hundreds of dazzled journalists—knew her name and fervently spread the news. Her emotion-drenched vocal style took hold upon other developing singers; Led Zeppelin’s Robert Plant among them. Young women who saw her onstage at the Avalon Ballroom or Bill Graham’s Fillmore venues still recall the experience: It was like she was singing to or for them, telling their stories, feeling their pain, emboldening them, and absolving them of shame. Janis was a walking live nerve capable of surfacing feelings that most people couldn’t or wouldn’t, and she was willing to endure the toll it took on her.

Janis never compromised her vision. She wasn’t afraid to cross boundaries—musical, cultural, and sexual. Openly bisexual in an era when it was illegal, she was not afraid of jail, of judgment. Similarly, when critics and fans expressed umbrage at her audacity to quit her role as “chick singer” in a band that she felt was holding her back, she did it anyway. Just four days before her death on October 4, 1970, she told journalist Howard Smith, “You are only as much as you settle for.”

Janis Joplin never settled. The oldest child of a close-knit family, she adored her father, a Bach-loving secret intellectual and a closet atheist in a conservative oil town. Preteen Janis was a rambunctious tomboy who was also cerebral, curious, and a gifted visual artist, which her parents encouraged. When she reached high school, the 1950s were in full swing, and her embrace of the Beat Generation and of progressive racial views alienated her from her community. Janis’s first transgressive act was to be a white girl who gained an early sense of the power of the blues, chasing the music in Gulf Coast saloons and on obscure records. She never fully recovered from the intense scorn of her peers, who also ridiculed her appearance, especially after she patterned herself on beatnik girls she’d seen in Life magazine.

Seth and Dorothy Joplin doted on their eldest child in many ways but were ultimately put off by her increasing acts of defiance—the same impulses that would eventually bring her fame. Always an attention hungry rebel, Janis upped her game in adolescence, spurred on by her budding sexuality, her discovery of rock & roll, and alcohol and speed. The wounds inflicted from the clash of wills during those turbulent years in the Joplin home never healed. Much of her life would be colored by the tension of wanting to belong and getting the attention she missed, while knowing that the best way to honor her family’s unspoken creed of singularity was to set herself apart. Discovering her outsize voice helped her find a place to fit in and create a new family—of bohemians and musicians, first, in Port Arthur and Beaumont, Texas, and then Austin, and finally San Francisco. She embraced life with a joyous ferocity, though she could never escape a fundamental darkness created by loneliness and a bleak fatalism bequeathed by her father. Choosing alcohol and drugs as painkillers just made everything worse.

A passionate, erudite musician, Janis was born with talent but also worked hard to develop it, though she would often omit this striving toward excellence from her origin story. When you hear outtakes of her in the studio recording what would be her final album, “Pearl,” she’s taking the reins, running the show. During a period when women did not produce their own music, she collaborated fully with her notoriously iron-fisted producer, Paul Rothchild. These sessions were a time of artistic blossoming for Janis. Her ideas—along with her extraordinary voice and her simpatico Full Tilt Boogie Band—resulted in a masterpiece. After Janis’s accidental heroin overdose in 1970 at the age of twenty-seven, the posthumously released “Pearl” would become her most successful and enduring album, with its single “Me and Bobby McGee” the endpiece to a career that started with “Piece of My Heart.”

Janis Joplin’s distinctive voice sounds as powerful today as it did when introduced on the airwaves in 1967. More so than any of her peers, it cuts through the digital din, the noise of our age, and lands exactly where Janis wanted: deep inside the heart. Since her time, her work and life have inspired so many women to create their own sounds and walk their own uncompromising paths: from Lucinda Williams to Pink, Amy Winehouse to Carolyn Wonderland, Lady Gaga to Brittany Howard, Alicia Keys to Florence Welch, Grace Potter to Elle King, Melissa Etheridge to Kesha. Williams has written a song about her (“Port Arthur”); Pink hoped to play her in a film; Wonderland does a killer version of a 1962 Janis original (“What Good Can Drinkin’ Do”); Etheridge helped induct her into the Rock & Roll Hall of Fame in 1995. That night, Etheridge said, “When a soul can look on the world, and see and feel the pain and loneliness, and can reach deep down inside, and find a voice to sing of it, a soul can heal.”