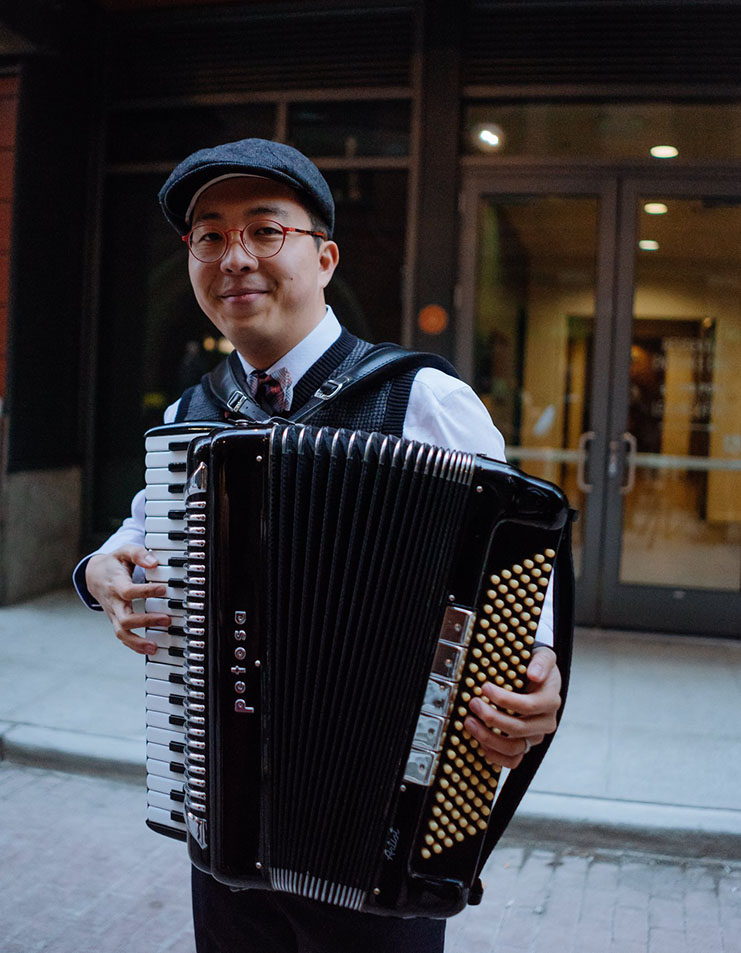 The accordion is an uncommonly-used instrument these days, but local jazz musician Josh Hou plays it with enthusiasm. And now, he plans to spread this excitement by releasing a CD and performing with both a trio, the Josh Hou Trio, and with his How Short duo with Andy Short.

Hou seeks to give the accordion the visibility he believes it deserves. “I love the sound of the accordion,” Hou said. “Its tone blends so well with trumpet, saxophone or clarinet, which makes it work really well in jazz contexts.”

He admits that the accordion wasn’t his first instrument of choice. “I started taking piano lessons when I was very young,” he said, “but I first got into jazz when I was 15 and went to a tribute concert for Mongo Santamaria, an Afro-Cuban percussionist. The pianist that night blew me away.”

Hou pursued jazz piano right away. “It moved me in a way that the classical piano I was more familiar with never did,” he said, “and I needed to be able to make music that felt like that.”

It was then that he discovered the accordion. “The air control of the bellows allows the accordion to be really expressive in a way that’s very different from a piano,” he said, “by letting me control the dynamics of each note even after the initial attack, much like a saxophone or trumpet.”

Hou has drawn inspiration from many preceding musicians, including French accordionist Richard Galliano. “Listening to his records opened my ears to what is possible with the instrument,” Hou said. “I regularly refer back to his music when trying to figure out how to play in different contexts: soloing in a small group, accompanying a guitarist, or playing soulful ballads.”

He also admires saxophonist Bob Reynolds. “I love his work with Snarky Puppy as well as his own band, the Bob Reynolds Quartet,” Hou said. “He also maintains a YouTube channel where he talks about developing good practice habits and overcoming doubt as a musician and artist.”

Further inspirations arose from Hou’s Chinese heritage. “When I was first getting into jazz, I was really attracted to the blends between jazz and the various musical traditions from around the world, particularly Afro-Cuban jazz and bossanova,” he said. “As a musician of Chinese descent, I’ve long wanted to combine jazz with the Chinese music I grew up listening to.”

This impulse is behind one of the original tracks, entitled “Bilingualism,” on Hou’s CD. “I grew up speaking Mandarin at home, but I don’t speak as fluently as I wish I did and I definitely don’t read particularly well,” he said. “I’ve been working really hard at getting better lately and wrote this piece about the tension of not being fluent in what I consider to be my native language.”

Hou tried to capture this conflict in sound. “The piece starts out with a very Chinese sounding pentatonic melody on the accordion,” he said. “The trumpet comes in soon after with a more western sounding chromatic melody. It starts very hesitatingly, but over the course of the piece, it builds and eventually takes over. By the end, while the accordion’s melody is much more muted and halting, it still hangs on.”

He reports feeling well-supported by his two trio members, trumpeter Ray Larsen and bassist Troy Schiefelbein. “They spent a lot of time getting the music right by listening to the originals and really inhabiting the feeling of the music,” Hou said. “It’s been really inspiring to watch how much care they put into respecting the music and the album really reflects it.”

Despite this artistic support, Hou struggles with perfecting his music. “No matter how much I practice and perform, there’s always a tiny voice in the back of my mind saying that the music isn’t good enough,” he said. “I really appreciate Ray and Troy giving me a forum to test out the new music I’m writing and get constructive feedback on how to make it better.”

Financial and venue-related challenges have also been tough. “I’ve been fortunate enough to have been able to find jobs that allow me the flexibility of taking time off to rehearse and record,” Hou said. “Live music is a really important part of the cultural lifeblood of the city, yet fewer and fewer restaurants are hosting live music and even dedicated music venues, like Tula’s, are closing.”

This shortage of performance space is leading Hou to look outward toward touring. “I’d love the opportunity to bring this music to other cities, especially in China and Malaysia, where I spent much of my childhood,” he said. “It’d mean a lot to get to play this music in the places I grew up, as well as show my bandmates the places where the music comes from.”

At the same time, Hou wants to delve deeper into his Chinese musical roots. “I’m planning to work on more Chinese music with this trio,” he said. “I’d really love to collaborate with musicians that play Chinese instruments. It’d be very exciting to bring in an erhu or pipa or sheng to record some music together with this group.”