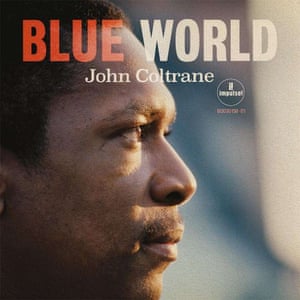 Puzzled eavesdroppers on recent jazz gossip might be forgiven for suspecting that the music was something that only happened decades ago, and enthusiastic reports of its current rude health are fake news. Three weeks after Miles Davis’s exhumed and embalmed 1985 Rubberband release comes a previously unknown John Coltrane 1960s-quartet session called Blue World – short tracks and alternate takes on early Coltrane originals, recorded for a Canadian movie soundtrack in summer 1964, and never intended for release.

But unlike Rubberband, Blue World – even if its movie agenda required simpler, and more lyrically explicit delivery than anything else this enthralling band was doing on the road or on record in 1964 – is still Coltrane quartet music to its vibrant core. Commissioned by Canadian director and Coltrane fan Gilles Groulx for a Montreal love story called Le Chat Dans Le Sac, Blue World features two takes of the exquisite 1959 ballad Naima, three of the catchily hooky Village Blues, the Sonny Rollins dedication Like Sonny, a harmonically audacious exploration of the modally stripped-down title track, and a storming ensemble performance on the standout, the mostly-improvised Traneing In. For newcomers to a 20th-century musical giant who transcended genre frontiers, it makes a very attractive sampler. For fans who know that the dark, lamenting Crescent preceded it, and the legendary and hippy-hypnotising A Love Supreme followed, it’s a fascinating hybrid of Coltrane’s song-based earlier methods, and his incandescently devotional late period.

Also out this month