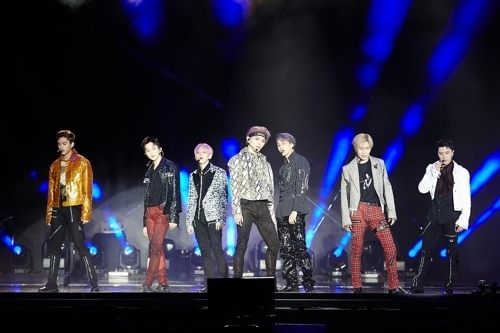 Brand new K-pop act SuperM topped a main Billboard chart upon its debut in the United States, according the chart result re-released on Monday.

The supergroup’s first release, “SuperM: The 1st Mini Album,” debuted at No. 1 on the Billboard 200 albums chart for the week of Oct. 19, making the septet the first K-pop band to do so following global phenomenon BTS, Billboard said.

The achievement was made only two weeks after the group’s official release on Oct. 4.

“The set … launches with 168,000 equivalent album units earned in the US in the week ending Oct. 10. … Of that sum, 164,000 were in album sales,” the US music magazine said in an online article, citing data from Nielsen Music.

The result will be officially posted on the Billboard website on Tuesday (US time), the magazine said.

The band, formed jointly by South Korea’s biggest music label SM Entertainment and US-based Capitol Music Group, made its US debut on the outdoor stage of Capitol Records Tower in Hollywood on Oct. 5.

SuperM’s No. 1 on the Billboard 200 is the first such feat by a K-pop band, after BTS scored its third No. 1 on the same album chart with its “Map of the Soul: Persona” in April.

“SuperM’s handsome start was encouraged mightily by an array of permutations in which to purchase the album, which was likely very appealing to the group’s fans,” Billboard said.

The creation of SuperM marks one of the highest-profile collaboration projects between South Korean and American music labels.

SM put together SuperM by bringing together performance-savvy members from several of the label’s highly accomplished boy bands — EXO, SHINee, NCT 127 and WayV.

The band includes a Chinese member as well as a Korean-Canadian and a Chinese-Thai member. (Yonhap)