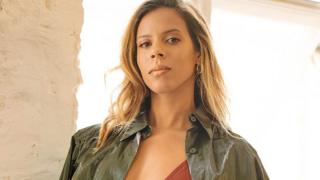 Recent conversations about racism are empowering more black women to speak about their experiences in the music industry, says singer Kelli-Leigh.

Kelli-Leigh has voiced two UK No.1 singles and a string of club hits, but has struggled to find label support for her own music.

The singer from south London wants more recognition for black women working in dance music and says it’s not just her whose work is being overlooked.

The first big hit Kelli-Leigh worked on was Duke Dumont and Jax Jones’s I Got U, which was No.1 in 2014.

She was hired as a session singer to provide the vocals on the track, so didn’t expect credit on the song.

But she hoped the track’s success would give her career the boost she wanted.

It didn’t. Neither did a second No.1 that year or a Top 10 single in 2017, More Than Friends with James Hype, which did credit her.

James tells Newsbeat he wants to see more “transparency” in the dance industry.

“I think transparency is everything, to be honest. It would be great for the fans to know exactly who is behind the piece of music,” he says.

“A lot of dance records rely on authentic, soulful-sounding voices and there are a lot of records where that is almost the biggest part, in dance music.”

James says it was a “no-brainer” to share the song credit.

“Whether or not it was going to work, all came down to how good the vocal was on the track,” James says.

“As far as I’m concerned, if it wasn’t for Kelli-Leigh, that track probably wouldn’t exist, or if it did, then it may not have been as successful as it was.”

‘Are you playing the race card?’

Earlier this week, Kelli-Leigh tweeted about her frustrations, responding to a tweet about black women in dance music.

After nearly 10 years in music she now manages herself and releases solo music on her own record label, Music Core Ltd.

She says this is stigma all black women carry.

“We’ve had so many issues of subtle racism here and there that we’ve lived through our whole lives. A lot of us have adapted to it and ignored it,” Kelli-Leigh adds.

“You get to a point where some things just don’t seem like a coincidence any more. They can’t be. You’re not acknowledged.”

Kelli-Leigh’s words were praised by fans and musicians, including British producer MNEK and other artists who have appeared without full credit on major hits.

“This is the sad truth. Things need to change,” another singer-songwriter Carla Monroe commented on Kelli-Leigh’s Instagram post.

But this is nothing new.

In 1989 an Italian dance act called Black Box used a vocal sample of soul singer Loleatta Holloway on their worldwide hit, Ride On Time, without permission.

When copyright owners took legal action against the group, they got British singer Heather Small to re-sing the part.

Neither black woman was credited.

In 1991, a model appeared in the video to C+C Music Factory’s hit Gonna Make You Sweat, lip-synching to vocals by black singer Martha Wash.

“I don’t believe this is happening again,” Martha said to her managers a few months later when Black Box used vocals she had recorded as a session singer, without credit, on one of their albums.

A session singer is someone who works with another musician on a short-term basis or for a one-off recording, and how they are paid can vary.

‘Wow. This is something different’

On 2 June 2020, the music industry observed #BlackOutTuesday – inspired by the killing of George Floyd – where it closed down for a day to address internally how it could do better for its black artists and employees.

Kelli-Leigh says #BlackOutTuesday has brought conversations she’s had with people in similar positions into the open.

“I was like, wow, this is something different,” she says.

“This is actually all the companies joining in and saying there’s an issue here, we need to think about it and we need to bring in some change.

“So much has been allowed and people have just got on with it or ignored it. Now we’re at a point where people are really talking about it this week and saying ‘hold on a minute, that isn’t right any more’.”

The hits she’s appeared on does mean Kelli-Leigh is asked every day to write and record vocals on other people’s songs.

“I’ve made some money from being able to perform I Got U and I Wanna Feel alongside my own songs I’ve put out myself,” she says.

“But I haven’t been able to pay my bills like the people I’ve sung for have been able to.

“I’ve had to do so much more work to try and get equal respect. That’s when you think, there’s an injustice here.”

Now, she’s encouraging young black female artists to be “unashamedly bold” in what they want to do in the music industry.

“Unless you stand strong and proud of who you are, and do it in an unashamedly bold, proud way, then the industry will never change.”