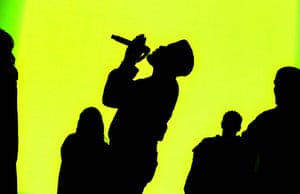 Like the majority of his peers, 21-year-old Texan Khalid favours collaboration. In the three years since the crisp R&B of his debut single Location was given a leg up via an appearance on Kylie Jenner’s Snapchat, his softly slurred croon has zigzagged across genres, augmenting songs by the likes of Calvin Harris, Pink, Lorde and Ed Sheeran’s recent UK No 1 Beautiful People. While collaboration is a prerequisite of pop’s new streaming-dominated era, for Khalid it’s also a way of enlivening an artistic persona cultivated over two albums that veers towards the soporific rather than the spectacular. Like Sheeran, who pops up tonight for a surprise run through of the aforementioned chart-topper, Khalid favours celebrating his ordinariness.

Whatever he’s doing seems to be working, with two nights at the O2 marking the start of a UK-wide arena tour. Shorn of his collaborators, however, Khalid tends to fade into the background. In fact, there are times when even the spotlight fails to pick him up, like he’s a session musician at his own headline show. Augmented by six dancers, who bring spectacle for the more upbeat songs such as Silence, his EDM collaboration with producer Marshmello, his comfort zone seems to be the slower, stool-assisted ballads like Saved, a song in which the travails of modern dating are explored with all the emotional heft of a shoulder shrug.

An awkward, self-conscious performer (his default move is an embarrassed version of the “shoot” dance popularised by Fortnite), his lack of stage presence means the focus moves to his navel-gazing, soft-focus pop, songs perfect for mood-based playlists, but not for arena-sized posturing. Things aren’t helped by the setlist, which runs to a patience-sapping 31 songs, with a clutch of harmless R&B-lite ballads perpetuating a mid-set slump.

There are flashes of brilliance – the bubbly, Disclosure-produced Talk; a relatively riotous Young Dumb & Broke – but it’s a frustrating show. Possessed of a lovely voice, it’s too often servicing songs that aren’t up to scratch, projecting an impression of an emotion rather than the real thing. This might be fine in a dinner party playlist, but is left wanting on a big stage.