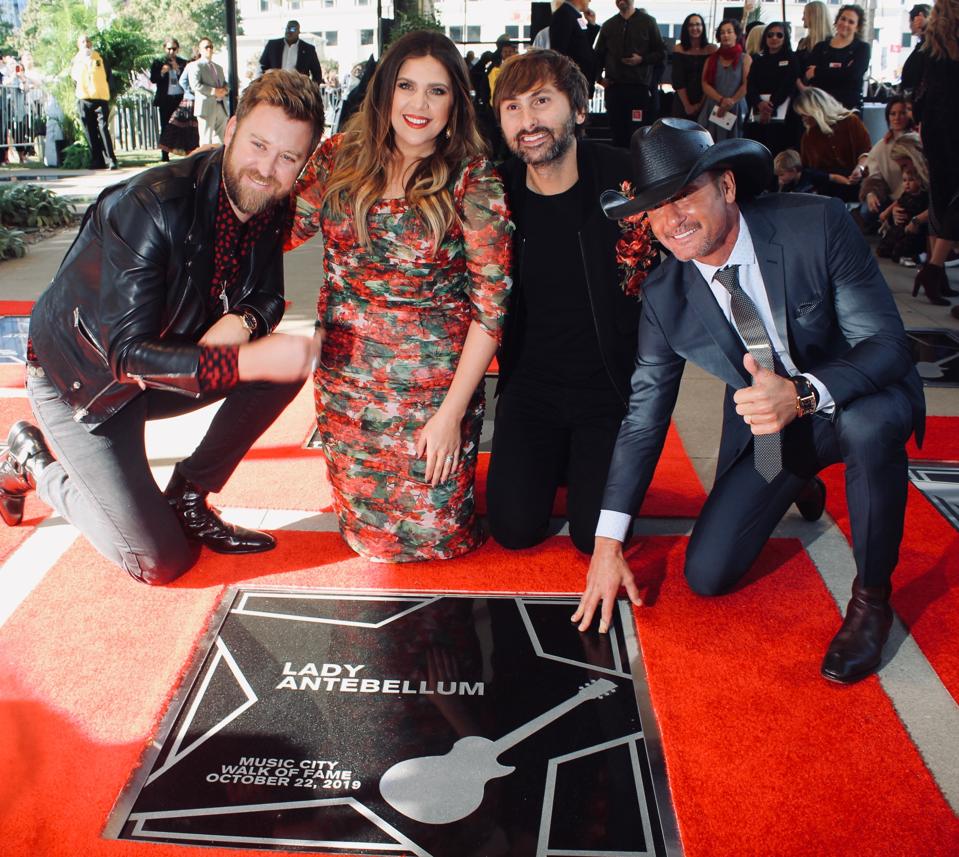 Just as Hollywood celebrates those in the field of entertainment, Nashville has a Walk of Fame that honors the biggest names in music. And the city just added five new names to the list.

The Walk of Fame stars given posthumously were presented first.

DeFord Bailey became the first African-American member of the Grand Ole Opry, making his initial appearance in June of 1926. Bailey was called “The Harmonica Wizard,” and became known for his signature song “Pan American Blues, although he could play other instruments including the guitar and banjo. He taught himself to play harmonica when, as a child, he contracted polio and was bedridden for a year . Bailey died in 1982.

“This is a wonderful day for the Bailey family,” his daughter, Dezoral Bailey Thomas, told the audience. “I never thought it would happen. But, I must say, this is God’s work because last Tuesday I turned 85 years old. So, He let me live to see this.” 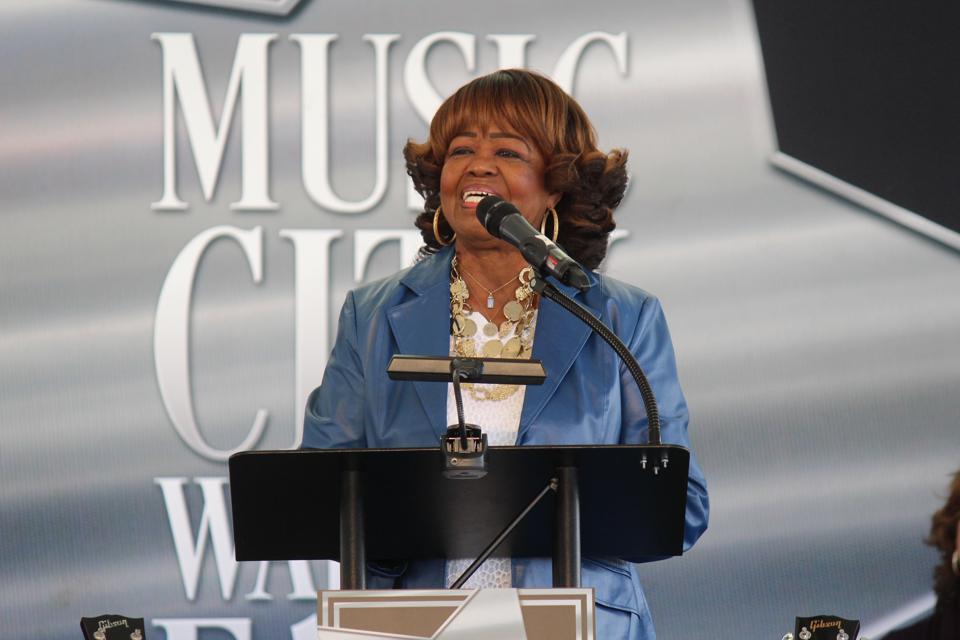 Her father’s star, she said afterward, “means the world” to her. 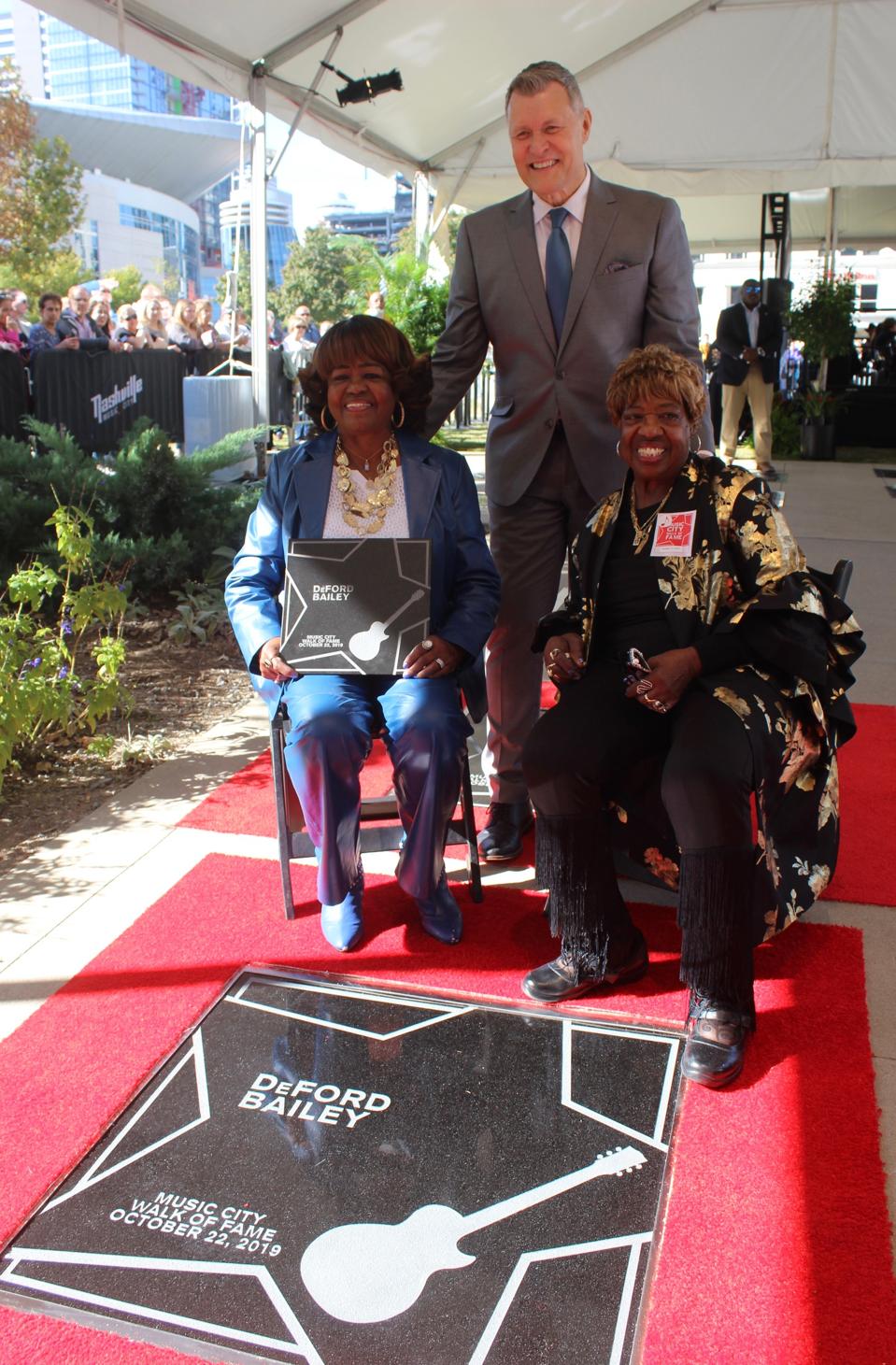 Next, guitar legend Chet Atkins, who was introduced by friend and artist, Steve Wariner. Nicknamed “Mister Guitar,” Atkins developed an innovative style that not only changed the way the guitar was played, but as a producer and head of RCA Records, he changed the style of music coming out of Music Row. He created what would be called the “Nashville Sound.”

A multiple Grammy-award winner, Atkins was named the CMA “Musician of the Year” nine times. Wariner told a funny story from the 1960s about how Atkins was once traveling incognito on a cruise with his wife and another couple when he saw a performer playing music on board the ship. 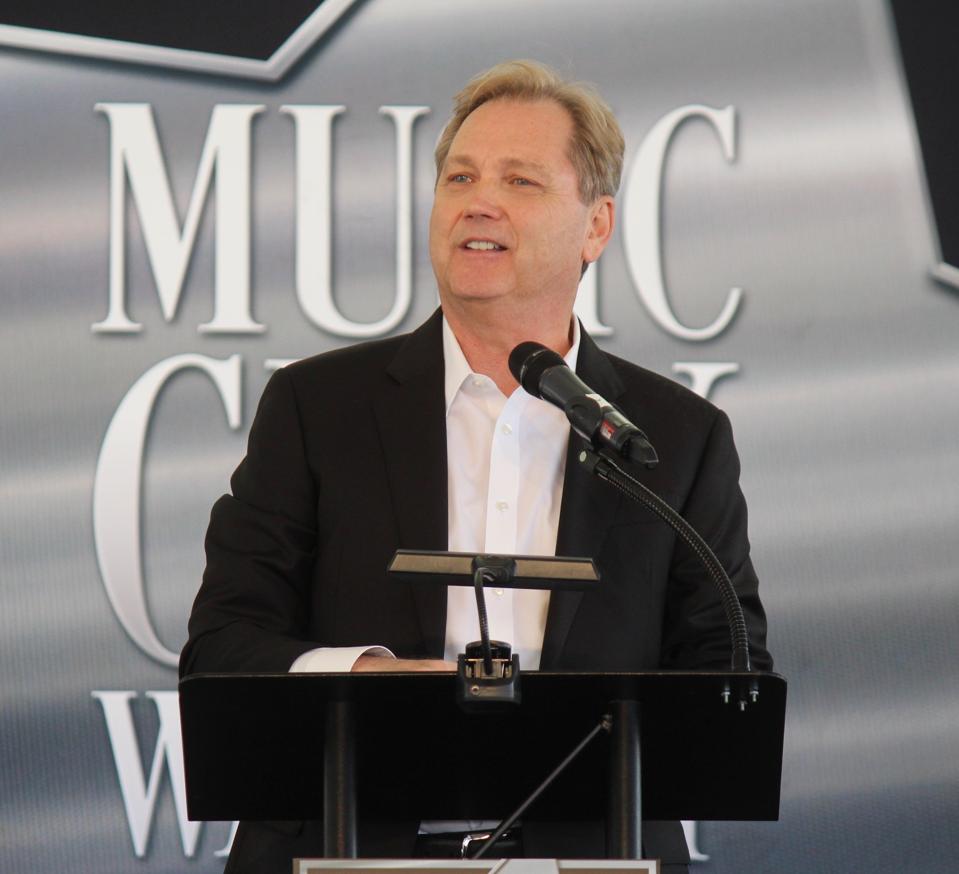 Steve Wariner at the Walk of Fame Induction of Chet Atkins

“The guy finishes playing, the crowd disperses, and Chet walks up and says, ‘Do you mind if I play your guitar?’” Wariner explained. “The guy says ‘sure’ and Chet plays a few licks. Then, the guy looks at him and says, ‘You’re pretty good, but you’re no Chet Atkins.” 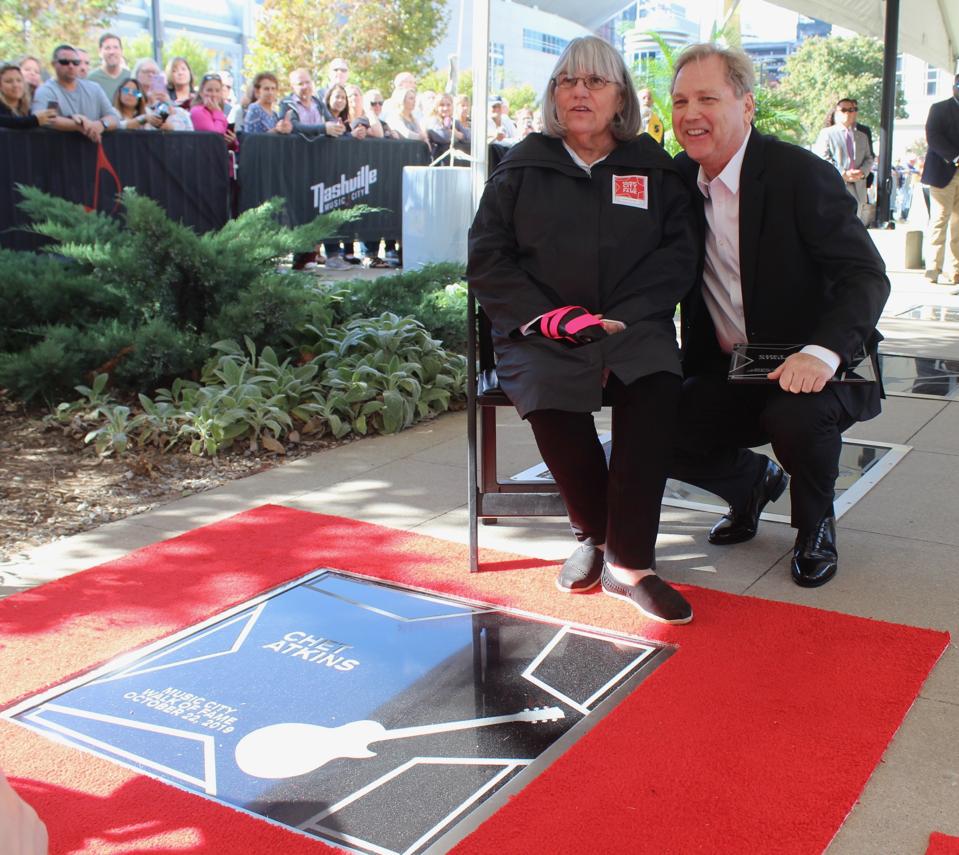 Amy Grant made the presentation for singer, songwriter, and musician, Mac McAnally. A performing artist in his own right, McAnally has written hits for Jimmy Buffett, Alabama, Kenny Chesney, and played on records for a “Who’s Who” list of country’s biggest artists. He currently travels with Jimmy Buffett, as well as performing on his own. He has a reputation for helping and mentoring other artists and musicians. 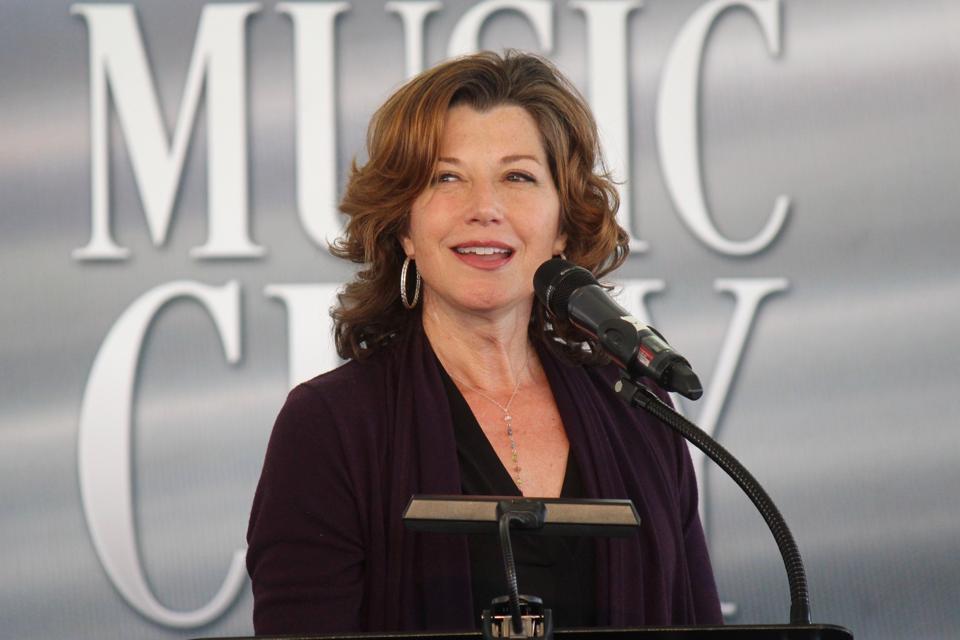 In describing McAnally, Grant recounted something she’d once heard someone else say. 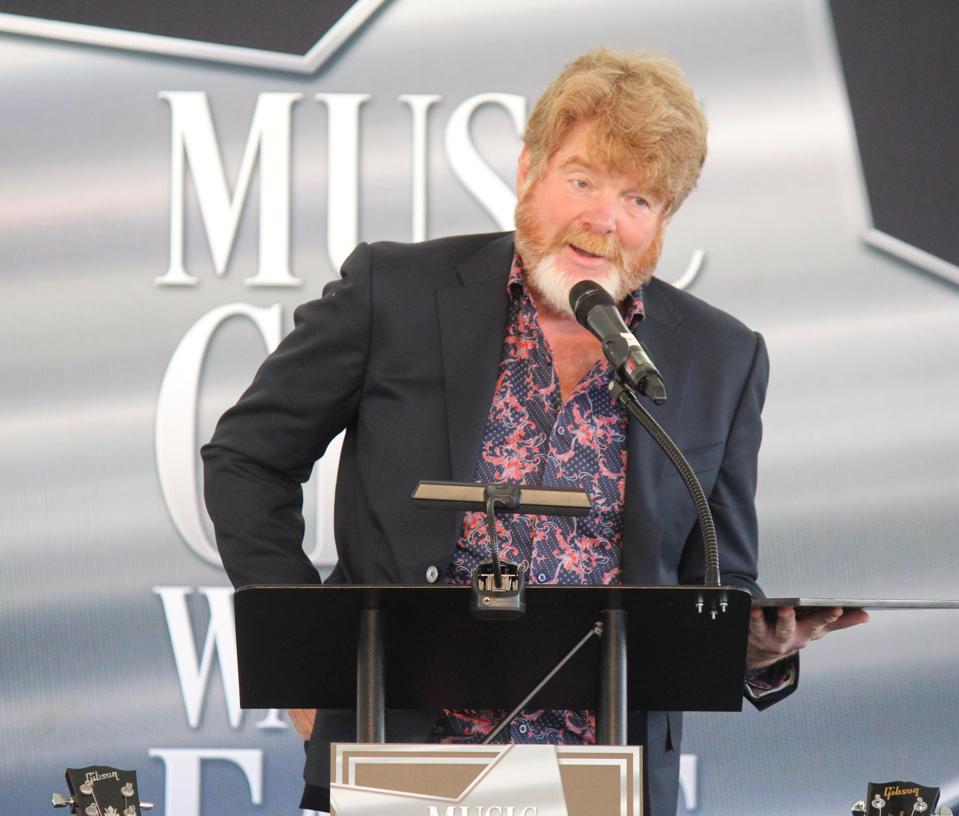 He expressed surprise and gratitude for the honor and said it was especially meaningful to be inducted along with his hero, Chet Atkins, who McAnally met shortly after coming to Nashville. (McAnally has since broken Atkins record by winning CMA “Musician of the Year” 10 times and is nominated again this year.)

He said he remains so grateful to be among those able to make a living making music.

“Music is one of the few things that can take bad and turn it into good. And all of my friends up here on stage, we get to do that. We get to turn whatever bad thing happened in our life into a song that makes OUR life better, and life better, hopefully, for somebody that went through that same kind of experience.” 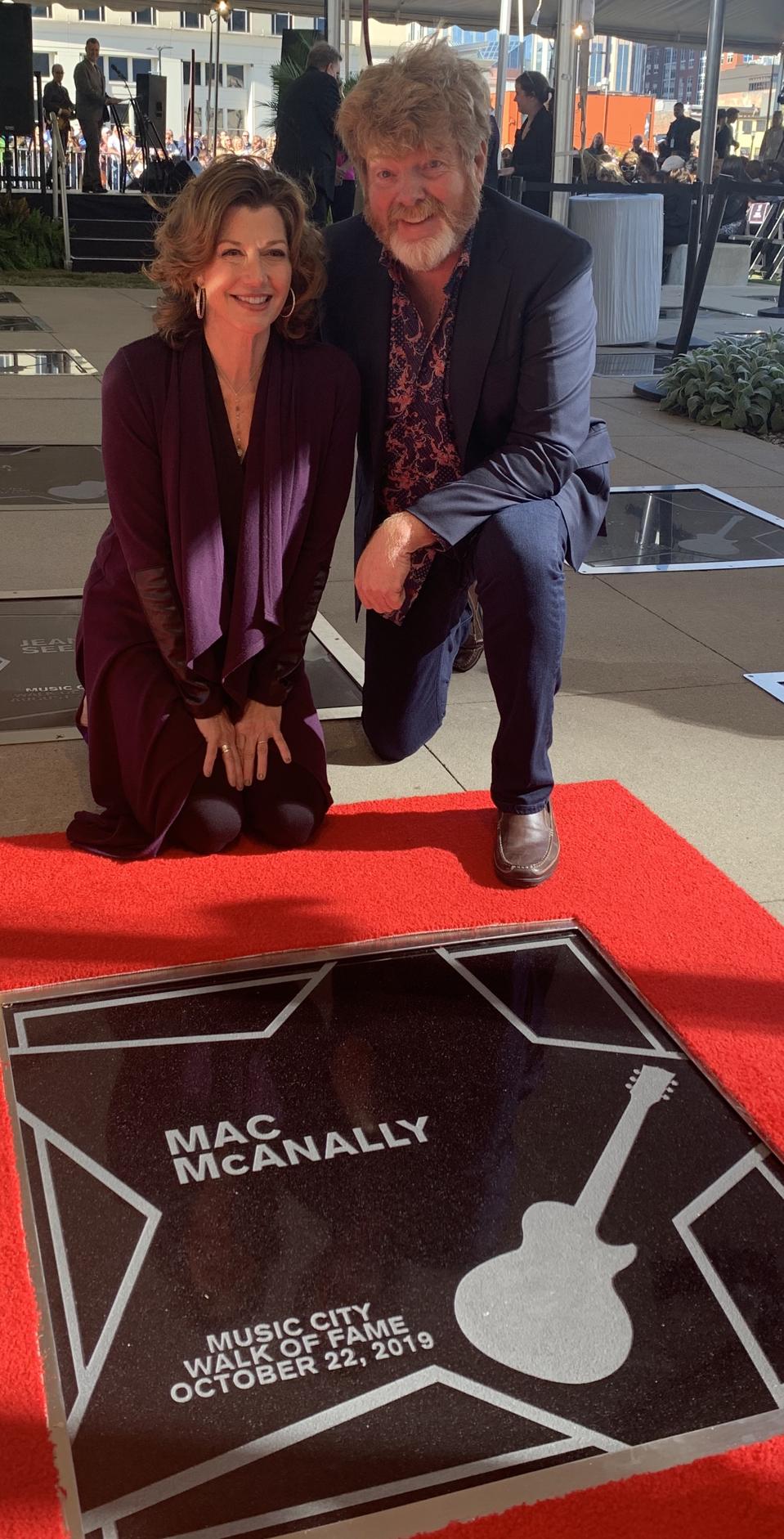 Tim McGraw took to the podium next, to induct Lady Antebellum, and recalled how he first began hearing about the group and recognizing they had something special back when he was searching for an opening act for his 2010 tour. He reflected on their harmonies and unique sound, then took a few minutes to tease Lady A member and good friend, Charles Kelley. 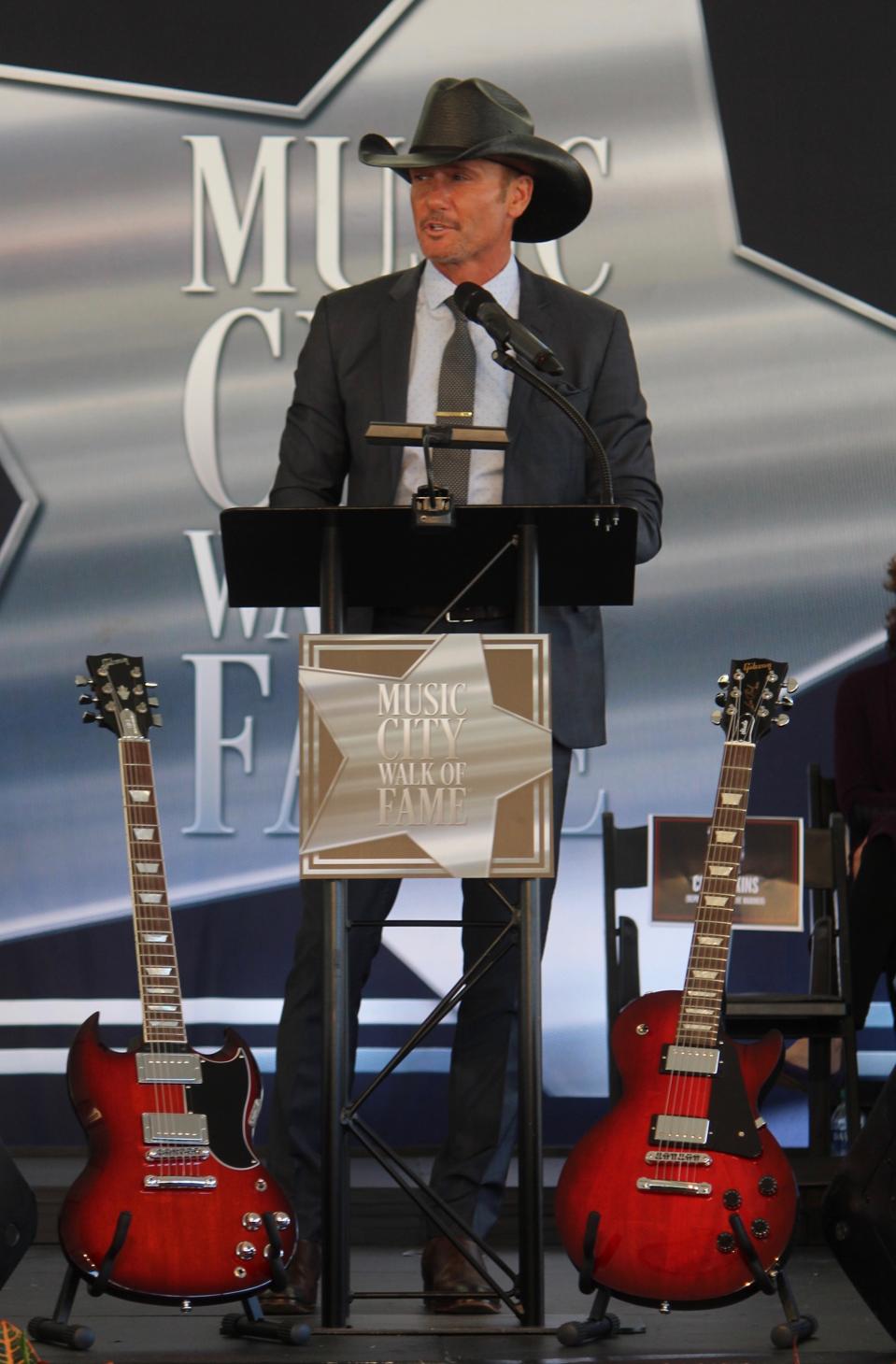 “It’s a great honor to say a few words,” McGraw said, “about Hillary, Charles, and Dave, better known as Lady Antebellum. Well, it’s really more Hillary and Dave…Charles, not so much.”

The crowd burst into laughter and McGraw continued, recalling one of their best known hits.

“We Need You Now,” was out and I loved the song, everybody loved the song. And then the way Hillary and Dave managed to both carry and hide Charles, keeping him in the background just enough to make him successful.” 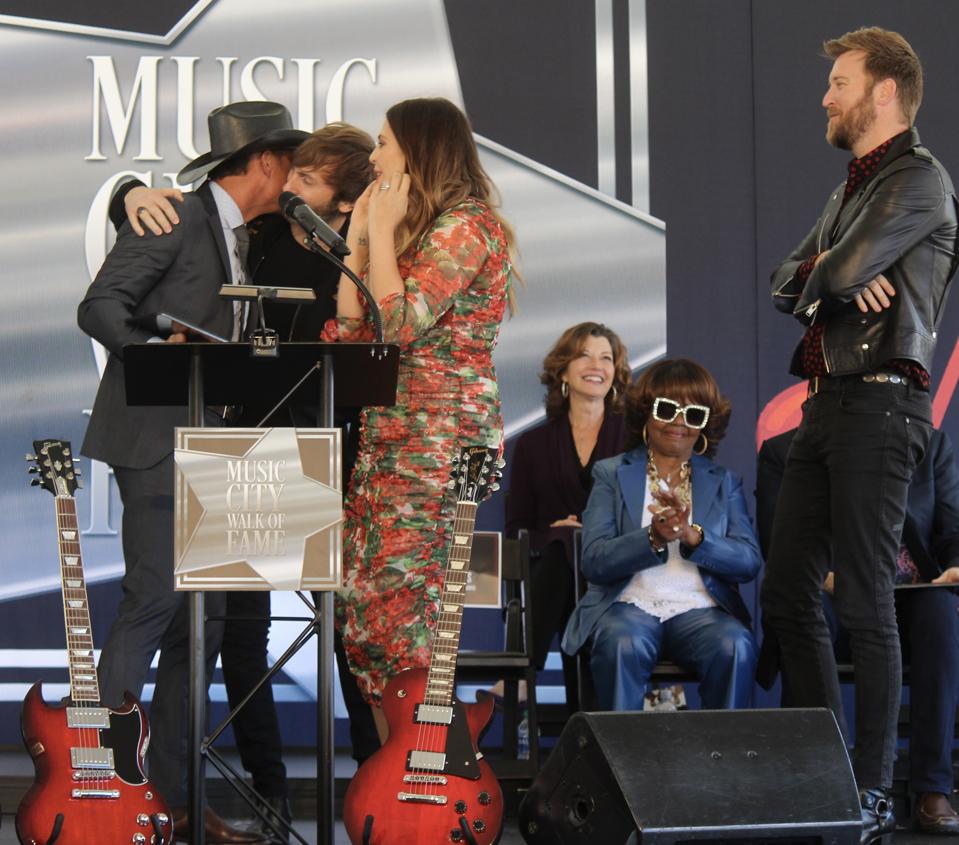 Kelley would get him back though, when he, and the rest of the group came up to accept the honor and share how thrilled they were to get a star on the Walk of Fame.

“These guys,” he said, as he pointed to the artists on stage, “they grew up with more, Waylon Jennings kind of artists, but we grew up with THEM. We grew up in the 90’s listening to Clint Black, and Tim McGraw…reluctantly.”

Again, laughter from the crowd.

The final presentation came for Clint Black who first hit the country music scene in 1989 with his debut album Killin’ Time.  That album would net five consecutive singles and Black would go on to sell 20 million albums, and have 22 No. 1 hits, with dozens more in the Top Ten. 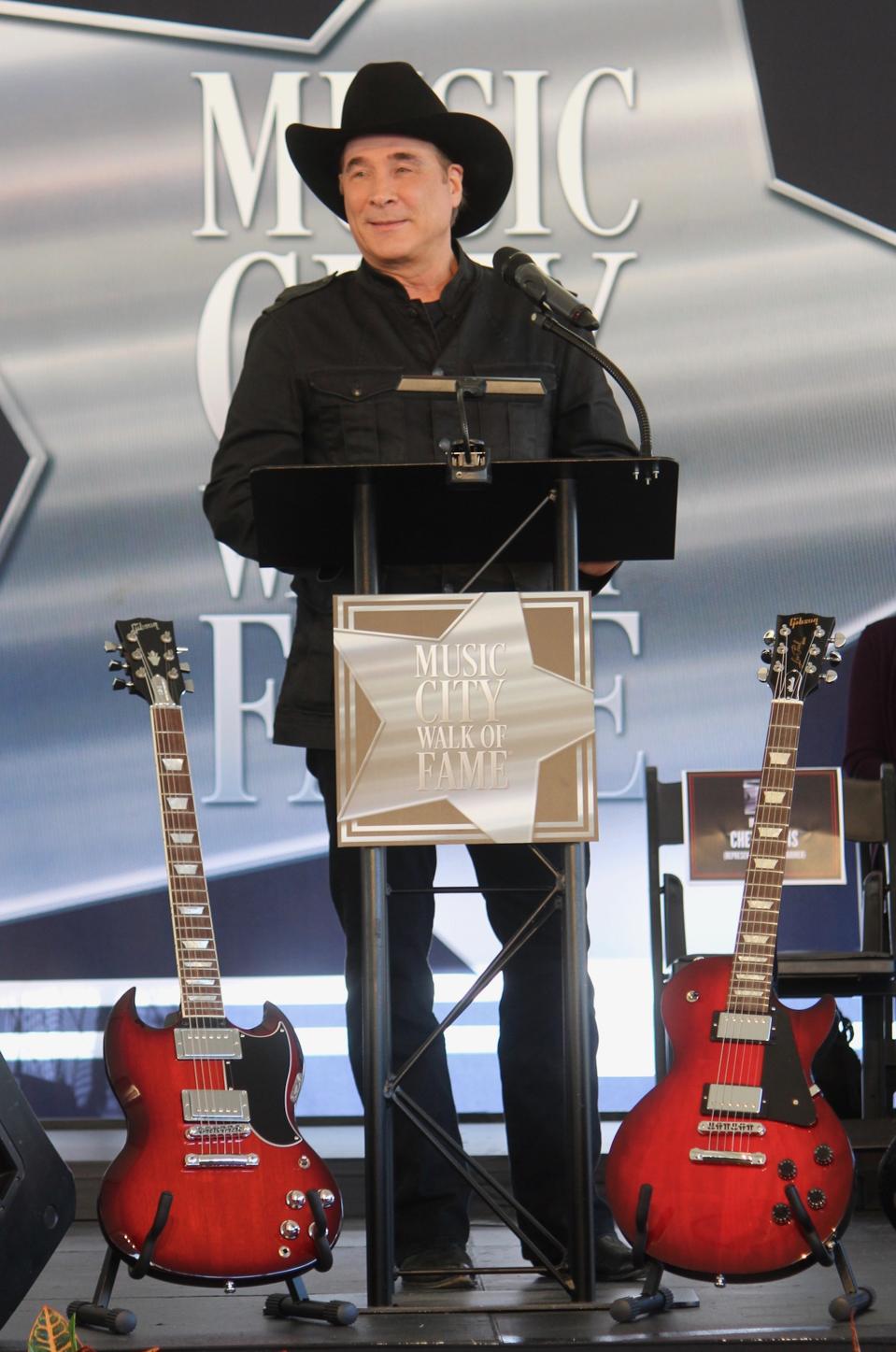 Black spoke a little about fame and how achieving it was never his goal when he set out all those years ago. It was always about the music and getting better at his craft. So, he expressed how humbled he was by the induction. He mentioned how the others on stage had influenced him, then pulled out a harmonica and to the surprise of everyone gathered, played a little bit of “Pan American Blues” in honor of DeFord Bailey.

Later, Black said how much it truly meant to have his a star on Nashville’s Walk of Fame. 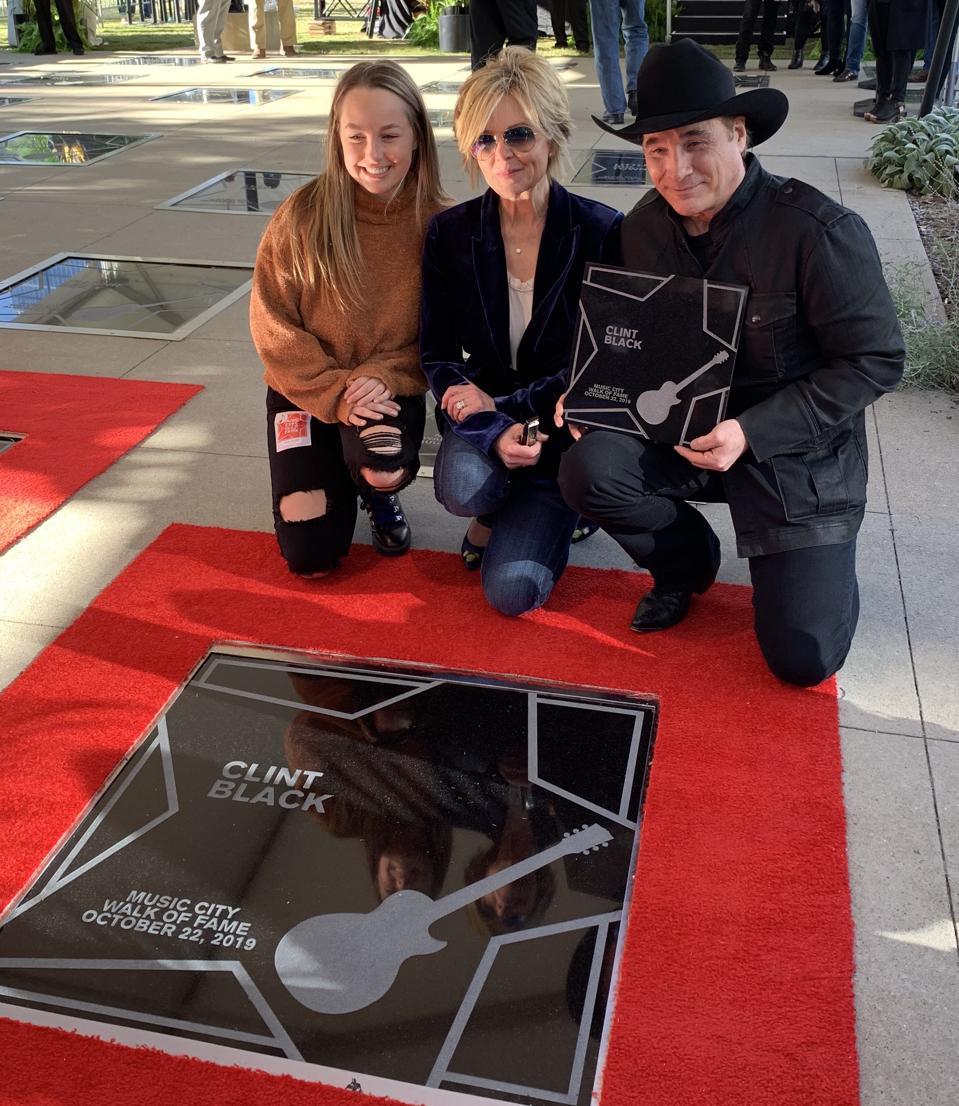 “For me it feels like it’s a more permanent place in the history of country music. Winning awards has been a part of my history, but to be there on the walk, in cement and granite, just feels more permanent.”

He said it’s nice to think that people who might walk by and not be familiar with his songs, might decide to check some of them out.

“Maybe they’ll have a listen and like my music,” he said with a smile. “That’s why I did it all in the first place.”

Interestingly enough, Black also has a star on Hollywood’s Walk of Fame, following his role in the 1994 movie Maverick.

Black stays busy touring and is still working on new music with a live album out November 8,th and a new studio album set for release in March of 2020.

Lady Antebellum also has a new album coming out on November 15th.

Music City Walk of Fame Park is located right across the street from the Country Music Hall of Fame in downtown Nashville. There are currently 89 stars that honor artists like Elvis Presley, Dolly Parton, Little Richard, Johnny Cash, and many more. 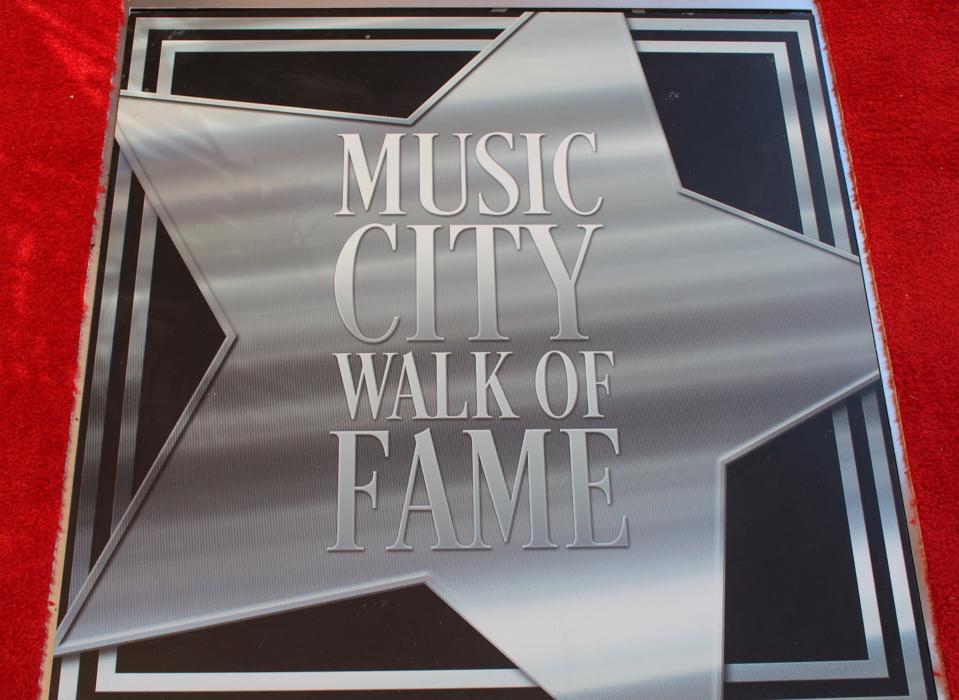