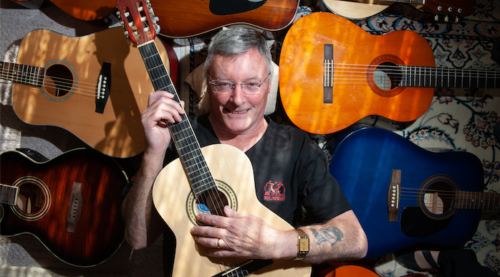 GUITARS for disadvantaged children is the aim of a group of Canberra veterans who every week experience the therapeutic benefits of playing music.

The group wants to share the positive power of guitar playing with troubled kids, but they need donated guitars (new and old) and guitar parts such as strings, according to member and the man behind the idea, Colin Greef.

Ex-Navy man Colin, 70, of Chisholm, hatched the idea through a Soldier On guitar group, which has been running for about four years. Its five members play together every Thursday.

For Colin, who initially picked up the guitar during his 32 years of long stints at sea, says the group is about mateship and he wants to give that to younger people in the community.

Mike Hogan, another group member, hopes it will get children off the streets and help them form friendships through music.

“Not every kid wants to play sport or can play sport,” says Mike, 71, of Tuggeranong.

“The objective is to see kids start their own band.”

Mike, who is also ex-Navy, came to the Soldier On music group for different reasons but, like Colin, loves the therapeutic benefits of playing the guitar.

“I had a mental breakdown and music got me off my backside,” Mike says.

“It took me a while to come out and join a group though.

“Music can change your life in a good way. I had played before, had nothing else to do except sit at home so thought I may as well get the guitar out – it’s good therapy.

“You’ve got to put the effort into yourself.”

Mike, like Colin, also enjoys the sense of comradeship that the group provides.

“It’s a sense of loyalty to people who have the same ethics,” says Mike, who enjoys playing jazz, blues and country (anything but rap).

Colin, who loves country music and ballads, says guitar playing is also a great way to get the brain going and get people out of the house.

“When I retired I was getting a bit bored and was still interested in music so I joined the group about two years ago,” he says.

“That’s what’s good about things like this, it gives an incentive to get out of the house. 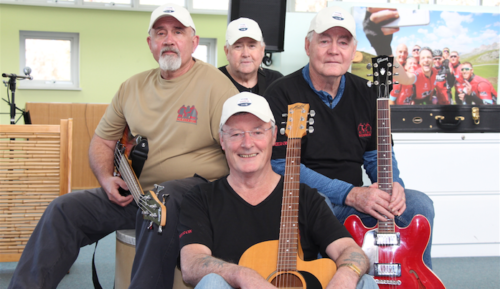 “Playing the guitar gets the brain going and it’s also addictive.”

And while the group, for Colin, is mainly about mateship, something that was a big part of his years in the Navy, he says it’s also about giving back to the community.

“Every now and then we’ll play at a nursing home or a retirement village,” he says.

“We want to give something back to the oldies in the nursing homes but also, now, we want to start giving something to the young kids.”

And, Colin says, he’s encouraging any ex-service people, whether they’re from the defence force, the police force or an emergency department, to come along to the Thursday group and pick up a guitar.

“We just want to encourage veterans to come,” he says.

“If they think they have any problems at all, they don’t even have to play, they can come and listen.

“We have guitars and we can teach them a couple of chords. We have all the equipment; amplifiers, plugs, microphones.”

The Soldier On activities officer, Debbie Dimmock, who runs the group, says it’s great to see this group serving the public by fixing guitars and donating them back to children and teenagers.

“This music group is just one of the activities we do here to support people who have been adversely affected through service,” she says.

“Soldier On is about creating social connections for wellbeing through off-site and on-site activities.”

The group has already donated some guitars to schools but is calling on more people to donate so it can give guitars to any disadvantaged kid or teenager in the ACT who has an interest in music.