So,
no one told you life was gonna be this way. Who knew
Friends would be so
prophetic!

In a year that has already provided enough
drama to fill 236 episodes of a hit television series,
today’s announcement that New Zealand is moving to Level 1
restrictions means this year’s tour of Friends! The
Musical Parody can go ahead as planned.

The
20-venue tour that starts in Gore on 6 September and ends in
Tauranga on 2 October is filled with
kick-you-in-the-crotch-spit-on-your-neck gags, lovingly
lampooning one of TV’s all-time greatest
shows.

Producer Ben McDonald says he’s thrilled to be
able to continue the tour that so many people were looking
forward to.

“We’re in a unique position as a theatre
producer,” says Mr McDonald. “Our model has always featured
New Zealand cast and crew which means we can continue on
despite the international borders being closed.

“We’ve
developed audiences in regional New Zealand and are honoured
to among the first to return to towns and cities after the
Covid-19 hiatus. It’s always been our model to support the
New Zealand industry and it feels good to continue our
journey at this time.”

Friends! The
Musical Parody takes a hilarious look and remembers
the TV phenomenon that ruled the 90s and became a cultural
institution with millions of fans across the globe. Like the
original television series, Friends! The Musical
Parody follows the lives of six wacky 20-somethings
and goes back in time to celebrate and poke fun at some of
their most iconic moments as they navigate the pitfalls of
work, life, and love in 1990’s
Manhattan.

Friends! The Musical
Parody is an hilarious good-hearted romp through
our favourite moments from the hit TV show in an uncensored,
hilarious, fast-paced, music-filled production.

The
fun begins on an ordinary day at the corner coffee show,
Central Perk, when a certain runaway bride, with the
signature hairstyle, stumbles into the lives of five other
friends and kicks the whole gang out of second
gear.

Ross, Chandler, Monica, Phoebe, Joey and Rachel,
haven’t gone anywhere and are singing and dancing their
way back into our hearts in a delightful musical parody that
harnesses the nostalgia for the iconic TV show and takes it
to hilarious new places. Friends! The Musical Parody
is lead by a talented cast who nail the quirks, the
mannerisms and the catchphrases of our favourite
characters.

Now it’s your chance to be part of the
next chapter in the Friends saga. It’s the cliff hanger
episode. The one you don’t want to miss! Once you see it,
Friends! The Musical Parody will make your
day, your week, your month, or even your
year! 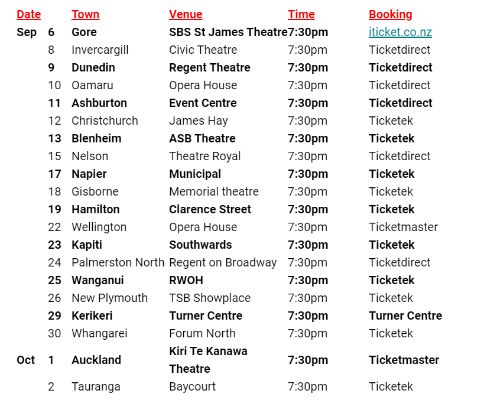 Join the Scoop Citizen Community20 years of independent publishing is a milestone, but your support is essential to keep Scoop thriving. We are building on our offering with thedig.nz our new In-depth Engaged Journalism platform. Now, more than ever sustainable financial support of the Scoop Foundation for Public Interest Journalism will help to keep these vital and participatory media services running.

Find out more and join us:

Become a member
Find out more