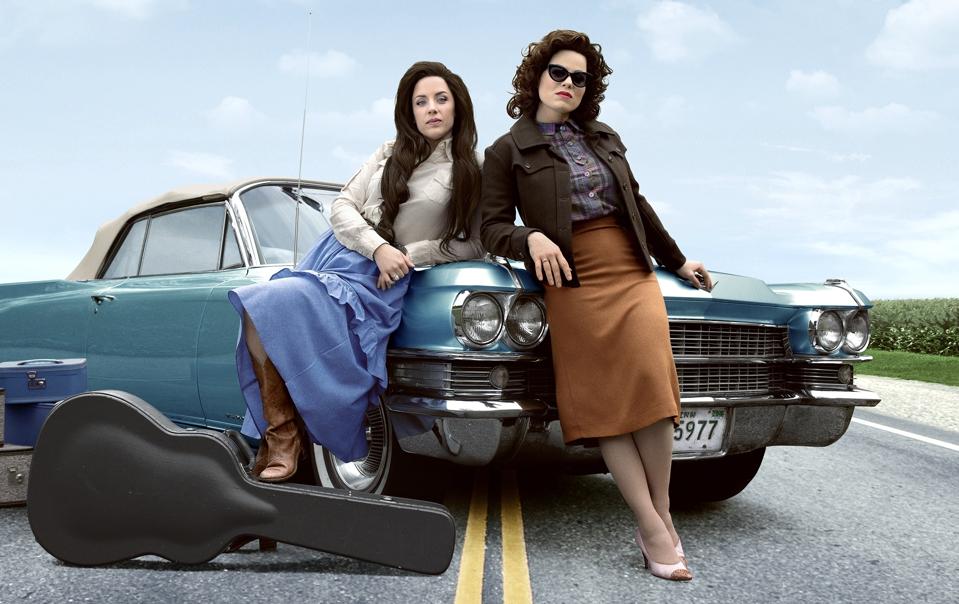 The film begins with Patsy Cline’s career already underway, while Loretta Lynn hasn’t yet made it onto the country music scene. When Loretta does make it to Nashville, an early meeting with Patsy becomes the start of a special friendship that would become very meaningful to both of them.

Megan Hilty (who performed in Wicked on Broadway and appeared in the TV show Smash) plays Patsy Cline, while Jessie Mueller (who won a Tony for her role in Beautiful: The Carol King Musical) plays Loretta Lynn. The film was directed by Callie Khouri who created the TV show Nashville. She also won an Academy Award for screenwriting for Thelma & Louise, another film that focused on a strong friendship between two women. The script for Patsy & Loretta was written by her stepdaughter, Angelina Burnette. As soon as Khouri read it, she knew wanted to direct the film.

“This was something so completely in my wheelhouse given six years of the Nashville show and my affinity for the music. And then, just the pairing of these two women (Patsy & Loretta) who had a special friendship most people weren’t aware of.”

Patsy Cline is famous for her songs “Walkin’ After Midnight,” “I Fall To Pieces,” and “Crazy.” She was only 30 years old when she was killed in a plane crash in 1963. Loretta Lynn grew up a “coal miner’s daughter” in Eastern Kentucky, and as a young mother taught herself to sing and play the guitar. She went on to become one of the most iconic singer/songwriters in country music. At the age of 87, Lynn has struggled with health issues since suffering a stroke in 2017.

While much is known about their lives and careers, the story portrayed in the Lifetime film hasn’t been told until now. Patsy Cline’s daughter, Julie Fudge, and Loretta Lynn’s daughter, Patsy Lynn Russell (named for Patsy Cline) were consultants and co-producers on the film.

The movie focuses on the two year time period after Patsy and Loretta became friends and began helping each other navigate their way through trying to maintain professional careers and raise a family, at a time when women weren’t doing that.

“It was a really difficult thing for women at that time,” says Khouri. “There weren’t other career woman they could look to and say, ‘yeah, it’s totally cool to leave your family for months at a time and go do this.’ There was still the expectation that men were the breadwinners and women stayed at home and raised kids. It wasn’t easy.” 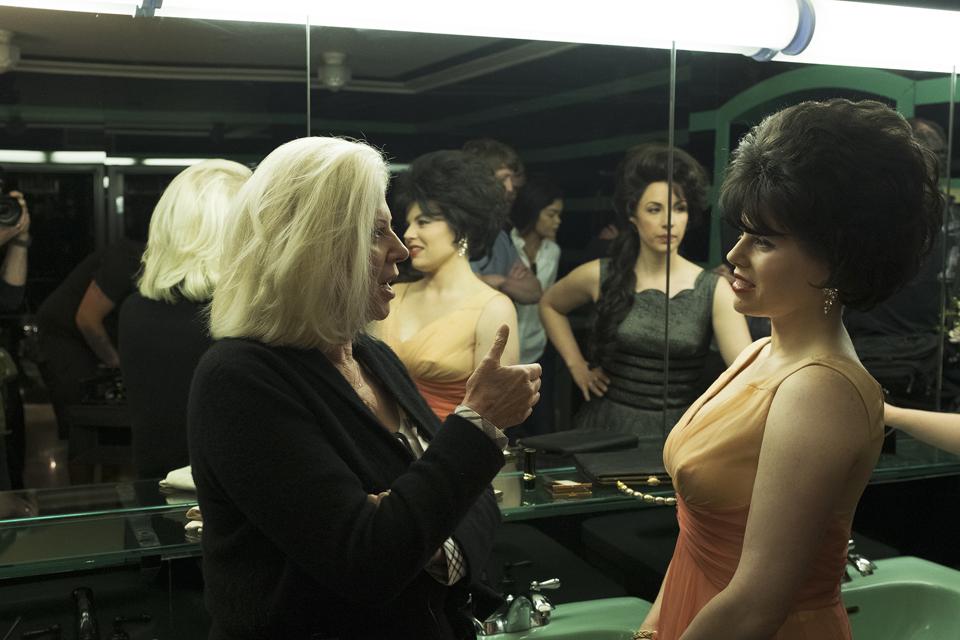 They women supported and encouraged each other with Patsy guiding Loretta in the early stages of becoming an artist.

“She taught her how to stand up for herself and be tough enough to make sure she gets paid,” Khouri explains. “That was one thing about Patsy, she did that for the men, too. Because back then a lot of those guys were well-known for holding out and not paying artists on time. Even Hank Williams got ripped off constantly. He would do a show and not get paid. And Patsy just wouldn’t have it.”

Their families grew close, and Patsy and Loretta often discussed the challenges of raising children and maintaining marriages and relationships (which were sometimes volatile) with husbands who stayed home while they were out on the road.

The movie was filmed in Nashville at many of the original locations where much of the real story occurred. Scenes were shot at the historic Ryman Auditorium (the former home of the Grand Ole Opry) and at Patsy’s original home. (Her home is currently available for short-term stays on Airbnb.)

“It’s a modest home by today’s standards, but it was Patsy’s dream house,” says Khouri. “And when you’re standing there you’re thinking, oh my God, this is where it happened, it happened right here. We shot a scene in her bathroom and there was gold leaf in the counter tops. This was her dream bathroom and these things were important to her. And then, every time I shoot at the Ryman, I feel the history. This is actually where this person stood or where that person stood. It makes history so immediate to be shooting in those actual places.”

With music such a critical part of the story, there was a lot of thought at how to handle it in the film.  Hilty and Mueller both sang their own songs.

“We had a lot of discussions about how authentic we wanted it to be, but we didn’t want Jessie or Megan necessarily doing impressions,” Khouri says. “They weren’t changing their voices massively to try to sound exactly like them. We wanted it to be their interpretation. And when you watch it, you just forget it’s not them.”

She adds that another aspect which makes the characters and their relationship feel so authentic is the real-life friendship that developed between the two women playing the roles.

“We were telling a story about a female friendship and it was happening in real life between Jessie and Megan. It was one of those rare experiences where everything was falling into place in such a way that we were creating a beautiful story that was made authentic by the depth of the emotion of the people who were playing it.”

“It’s one of my favorite things I’ve ever done” Khouri says. My director of photography and producer, Michael Lohmann and I are both so proud of it. I’ve been given the greatest gift to help bring this movie into the world and I think it’s really something people are going to love.”