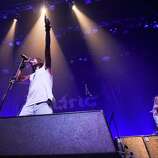 Lines formed outside the Jefferson Theatre on Wednesday for Muddfest 2019 — a heavy-metal band blast with enough tickets sold to fill the venerable auditorium that once swayed to the staid, solemn stylings of a pipe organist.

The event’s wide selection of bands drew fans that might not otherwise visit the venue, like Kristina Hernandez of Lumberton.

“We’re happy that big names are coming,” she said. “I don’t come here that often.”

The band Tantric’s techno wizard, a guy who called himself “Bundy,” called the Jefferson “a really cool venue.” Other bands featured that night were Puddle of Mudd, Saliva and Trapt.

The band had played at the Aztec Theatre in San Antonio the previous night. The Aztec, built in 1926, is a cousin of the Jefferson, built in 1927. Both are similar inside with a big stage, amphitheater seats and balconies. They were the movie palaces of their time.

“I love this venue,” said Stephanie Romero, who was excited to see Saliva.

The city of Beaumont’s events director, Lenny Caballero, wants to pack all the punch he can into Beaumont’s downtown venues, like the Jefferson, the Civic Center, the Julie Rogers Theatre and the Event Center.

Boz Scaggs, a 1970s-known jazz-folkie, is scheduled to play at the Julie Rogers Theatre Saturday. The Event Center had salsa dancing on Thursday

And the upcoming roster features the 45th anniversary tour of Los Lobos, its original lineup intact. Texas songwriter and guitarist Lyle Lovett is returning for a gig.

The Craft Beer Fest is already sold out. The city is adding a second stage to Oktoberfest in Rogers Park and Classic Movie Nights at the Jefferson draws scores of people on Friday nights.

The Fourth of July on the Great Lawn at the Event Center drew thousands, Caballero said.

Related: Save the date

And next year’s Mardi Gras of Southeast Texas is set for the same place with a downtown parade.

What magic is he working to attract the talent?

Caballero said he was at a popular Houston music spot called The Mucky Duck when he saw a performer named Jesse Dayton.

“I had never heard of him, but he was saying ‘I love Beaumont, Beaumont is my home.’”

Caballero said Dayton was in mid-teenage when he began to play with luminaries like Willie Nelson, Waylon Jennings and Merle Haggard.

Dayton will be in Beaumont in November, he said.

“I know Charlie Sexton, who is the guitarist in his backing band. His brother played in a band with Jimmy Simmons (a local jazz player and onetime university president who has performed at the Jefferson, the Event Center and anyplace else where people can fit). … “It’s really a small world.”

Caballero said there is always a chance to land a world-beater like Dylan, but he acknowledged that it’s a little like trying to book Willie Nelson.

“Willie never commits to anything,” he said.

Caballero also has another venue he’s trying to boost. It’s called “The Alleyway” because it is an actual alley between the Jefferson and the Hotel Beaumont.

It’s long and narrow, like any respectable alley, but Caballero said the events team can set up a stage at the end, backed by a mural of Janis Joplin, put out some tables and chairs, a spot for merchandise and provide access to the alley from the Jefferson’s side door, which allows people to use the restrooms and buy drinks.

The venue began June 1 and has hosted four shows, which Caballero publicizes on the city’s social media pages and through email blasts.

Ward 2 City Councilman Mike Getz, who led the effort to establish Oktoberfest at Rogers Park, has watched the festival grow in popularity for the lat few years and is hopeful it could expand for more than a daylong celebration.

While Caballero credits the the city events team for all the unseen work in landing talent and ensuring audiences for them, Getz credits Caballero.

Dan Wallach is a freelance writer.