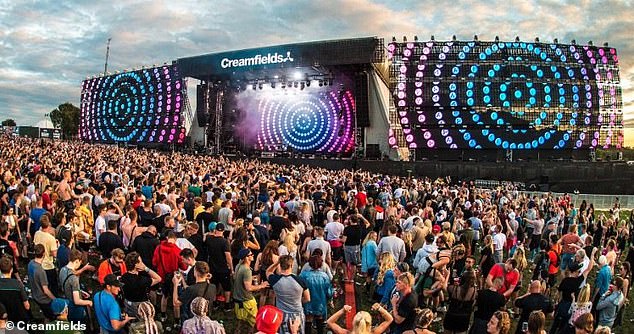 Man, 19, dies after falling ill at Creamfields dance music festival in CheshireHe was seen looking unwell by security staff at the dance festival in DaresburyThe 19-year-old was taken the medical tent at 12.15am on Saturday morningThe young man was rushed to hospital but medical staff were unable to save him

By Joe Middleton For Mailonline

A 19-year-old man has died after falling ill at Creamfields dance music festival in Chesire.

The young man was spotted looking unwell by security staff who were patrolling the festival site and he was taken to a medical tent to be assessed by a doctor.

At 12.15am on Saturday morning medical staff at the festival in Daresbury, Cheshire, told police a man needed medical attention, and he was taken to Warrington District General Hospital, as reported by the Stoke Sentinel.

Despite the efforts of medical staff he died in hospital. His family have been informed.

A post-mortem will take place to determine the cause of death.

Detective Inspector Alistair Hinze of Cheshire Police said: ‘There do not appear to be any suspicious circumstances surrounding the death.

‘A file will prepared for the coroner and our thoughts are with the family at this incredibly difficult time.’

A Creamfields spokesperson said: ‘We are deeply saddened to hear of this tragic accident.

‘We send our deepest condolences to his loved ones and we continue to work closely with the authorities.’

Police officers swooped in on the event’s Bramham Park site in the early hours of this morning following reports that a festival-goer from the Oldham area had been found dead at around 3.40.

A boy, also 17 and from Oldham, has been arrested on suspicion of supplying controlled drugs.