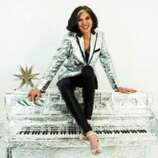 NORFOLK — Pianist, songwriter and vocalist Marcia Ball, who is the official 2018 Texas State Musician, is scheduled to perform at Infinity Music Hall at 8 p.m. Nov. 3, according to the venue.

Texas-born, Louisiana-raised, Ball has “won worldwide fame and countless fans for her ability to ignite a full-scale roadhouse rhythm and blues party every time she takes the stage,” according to a release.

“Ball’s rollicking Texas boogies, swampy New Orleans ballads and groove-laden Gulf Coast blues have made her a one-of-a-kind favorite with music lovers all over the world,” the release noted. “Her latest album, Shine Bright, produced by Steve Berlin of Los Lobos, is full of everything music fans love about Marcia — rollicking two-fisted piano, soulful vocals, a top-shelf band of Texas and Louisiana musicians, and Marcia’s magnificent songwriting.”

Ball was inducted into the Austin City Limits Hall Of Fame in 2018 and in 2019, won the Blues Music Award for Best Instrumentalist-Piano, the release said. She also won the 2019 Living Blues Award for Most Outstanding Musician (Keyboards) in both the Critics’ and Readers’ Polls, the release noted.