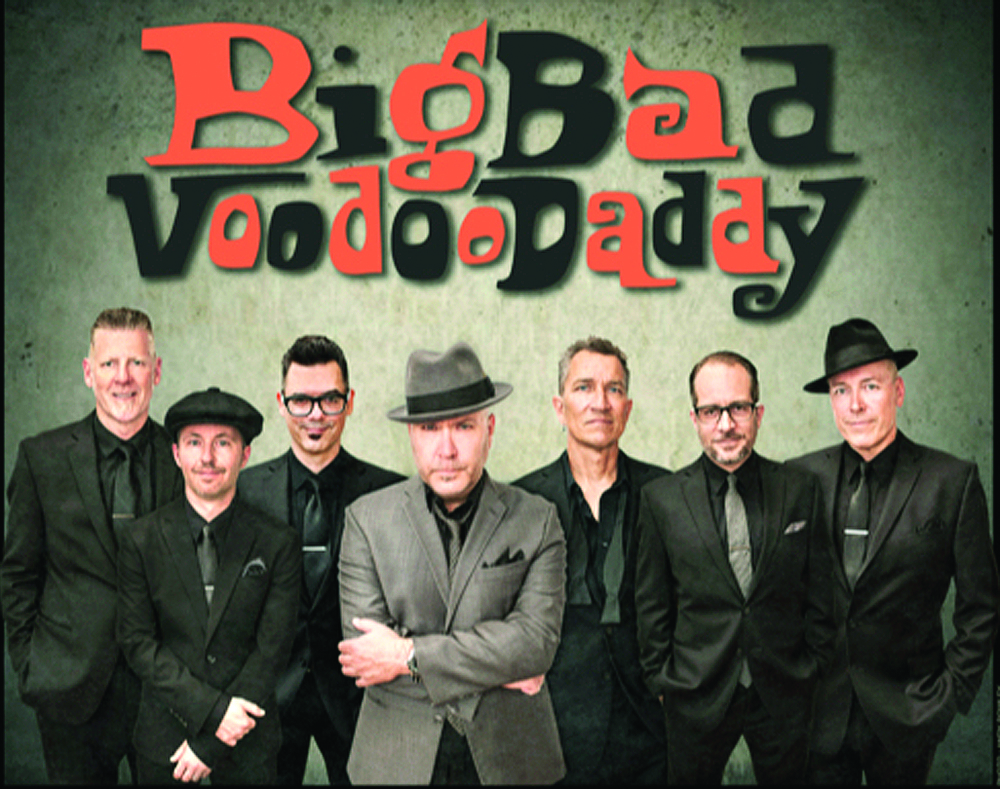 Big Bad Voodoo Daddy will be the headliner when the Robins Theatre has its grand opening on Jan. 9, 2020. (Submitted photo)

WARREN — Big Bad Voodoo Daddy will get the Robins Theatre off to a swingin’ start, but audiences won’t have to wait until 2020 to get a first look at the downtown theater that’s been dormant for 45 years.

Sunrise Entertainment will announce at a press conference today a dozen shows for the restored theater, as well as five productions planned by the Millennial Theater Company, a local troupe that will make the Robins its permanent home.

The grand opening date was set more than a year ago for Jan. 9, 2020, the 97th anniversary of the theater’s opening in 1923. Sunrise founder Ken Haidaris and developer Mark Marvin, who purchased the theater in December 2017, said they will offer a sneak peek on Dec. 7 with the Trans-Siberian Orchestra tribute act First Snow.

The sneak peek was scheduled for several reasons.

“It’s such a good Christmas show, I hated to pass it up,” Haidaris said. “We’re calling it a soft opening. It’s a tech-heavy show. We can run concessions, do everything we have to do for the grand opening and have a meeting — what did we do right, what did we do wrong? We want to make sure our parking is alright. We’ll have shuttles (from the downtown parking deck). We’re really making an effort to make this a great experience from the time you get there until the time you leave.”

Marvin added, “The lighting and sound are really demanding (for First Snow). If you have any deficiencies, it’s a good way to find out.”

To maintain the mystery for the grand opening, absolutely no cellphones or cameras will be allowed in the theater for First Snow.

Big Bad Voodoo Daddy, one of the main acts responsible for the resurgence in swing music in the 1990s, will headline a full evening of activities on Jan. 9. The band appeared in the movie “Swingers” and the half-time show for Super Bowl XXXIII.

The evening will include a cartoon short and a visual history of the theater, Marvin said. They’ll introduce the team responsible for renovating the structure, and three local acts will play short sets before the headliner.

“If we have three shows in one weekend, we’ll have three different types of shows,” Haidaris said. “Mix it up. If we get one demographic to come to one show, we’ll get a different for the other.”

Haidaris is working with Tom Simpson, who owns the Kent Stage, in booking acts for the Robins. Other shows that are part of the first set of announcements include ’70s classic rock acts like America, Blue Oyster Cult and a double bill with Poco and Atlanta Rhythm Section.

There also will be tribute acts like ABBAMania, a Dean Martin tribute on Valentine’s Day and the Journey tribute E5C4P3E, which drew a big crowd this summer at the Warren Community Amphitheatre for River Rock at the Amp, also produced by Sunrise Entertainment.

“My goal is not to have acts (at the Robins) we have at the Amp, but they’re just so good,” Haidaris said.

Sunrise and the Millennial Theatre Company previously teamed on productions of “The Rocky Horror Show” and “Chicago” at downtown Youngstown’s Ford Family Recital Hall, and the nomadic theater group now will have a permanent home. The 2020 season will include “Shrek the Musical,” “Heathers the Musical,” “Hairspray,” a reprise of “The Rocky Horror Show” and a summer production to be announced. It is teased in the press release as being “something so new, something so hot and something so fresh that we are not able to release its title at this time.”

“They did a great job with ‘Chicago,’” Haidaris said. “People can see a great play for not crazy money. I think it’s a valuable service, and it gives people a chance to showcase their talents.”

Also planned is a production of the Neil Simon comedy “The Odd Couple” starring WYTV morning show hosts Jim Loboy and Len Rome as the bickering roommates. The pair starred in a 2012 production at the Victorian Players in Youngstown.

Haidaris said theatergoers can expect to see more touring theater productions at the new venue in the second half of 2020.

“We’re waiting on some technical specs to do some of these shows,” he said. “It’s a work in progress. We’re waiting for certain things to happen before other things can happen.”

Tickets for all of the shows being announced today will go on sale at 10 a.m. Friday at the Robins Theatre box office, 160 E. Market St., Warren, and online at www.robinstheatre.com. An online-only presale will start Thursday. Those interested in the presale can register for the Robins Theatre mailing list on the website to get the password.

Movies are not part of today’s announcement, but Marvin and Haidaris said they will be a regular feature at the theater. In some cases, movies will be used as alternate programming on dates when no touring shows are scheduled there. But some movie programming will be scheduled to coincide with special events — horror movies around Halloween, Christmas offerings in December, and war movies around Memorial Day or D-Day.

* Dec. 7 — Sneak peek with First Snow (Trans-Siberian Orchestra tribute). No phones or cameras will be allowed for this performance.

The Robins Theatre also will be the new home of the Millennial Theatre Company. Its 2020 season includes:

Tickets for all shows will go on sale at 10 a.m. Friday at the Robins Theatre box office, 160 E. Market St., Warren, and online at www.robinstheatre.com. An online-only presale will start Thursday. Those interested in the presale can register for the Robins Theatre mailing list on the website to get the password.