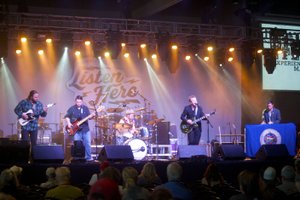 It was 10 years ago that a humble new festival rolled into Fayetteville with the moniker of “intimate urban music and food festival.” A decade later, the Roots Festival has expanded to five nights of 100-plus music and culinary experiences across two cities and only continues to grow in prestige and influence with each passing year. But the festival manages to maintain its intimate feel by focusing on the community, co-founder Bryan Hembree says.

“It’s this notion that this is not just one footprint, one field where everyone has gathered all together in the same place. But there are multiple different things happening across Fayetteville and Northwest Arkansas that we still have that kind of community cohesion and gathering, it’s just that people are all coming for a different slice,” Hembree shares.

WHERE — Venues across Fayetteville and Bentonville

“There’s so much happening that that’s the glue. It’s not one singular experience, but it’s a multitude of experiences that we’re getting to the point that we’re all sharing together.”

Those experiences range from the mainstage performances — which include a blend of returning fan favorites and new faces — to the VIP and community culinary events, to the free programming happening across the region. It really does feel like a 10-year-old festival where there’s something for everyone, Hembree promises. The addition and expansion of free and low-cost programming, on both the music and culinary sides, aligns with organizers’ goal of creating a festival for the community. And while the mainstages include some exciting collaborations and surprises, the Roots Festival continues to showcase the best of what Northwest Arkansas venues, chefs and musicians have to offer.

With more than 100 events over the festival’s five days, there’s no way we could list them all here. But get a taste of Roots Festival’s schedule below, and whether you’re attending all, some or none of the festival, join us in taking pride in our region’s creators establishing something so magical for music and food lovers.

5 p.m. — Smokey & The Mirror and The Sentimentals: The Denmark Project

Masterclasses at Brightwater: A Center for The Study of Food in Bentonville ($20 suggested donation)

NWA Democrat-Gazette/JOCELYN MURPHY The 10th year of Roots Festival will see the return of fan favorites, as well as compelling new faces on the both the mainstages and late night stages. 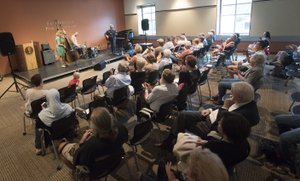 NWA Democrat-Gazette/J.T. WAMPLER Roots co-founder Bryan Hembree (right) is also one half of Smokey &amp; The Mirror along with wife Bernice. The duo have had a busy year recording and releasing two albums (one through Haxton Road Studios in Fayetteville) and traveling abroad. The pair of course takes the stage during Roots this week and will be joined by several other Roots artists for their sets. On the Saturday mainstage, Denmark group The Sentimentals will perform with Smokey &amp; The Mirror, following a collaboration between the two groups earlier this year. 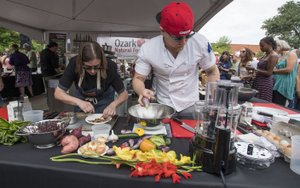 NWA Democrat-Gazette/J.T. WAMPLER Chef Chrissy Sanderson (left) of Fayetteville’s Mockingbird Kitchen and chef Joshua Walters of Bentonville’s MOD Restaurant & Social work on their winning entry during a previous Roots Festival Chef Cookoff. The cooking competition takes place during the Fayetteville Farmers’ Market on the Saturday of the festival and is one of the most popular events because the public can watch the chefs shop for their ingredients at the market, then prepare dishes in front of the crowd. 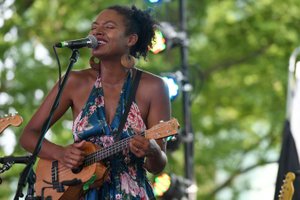