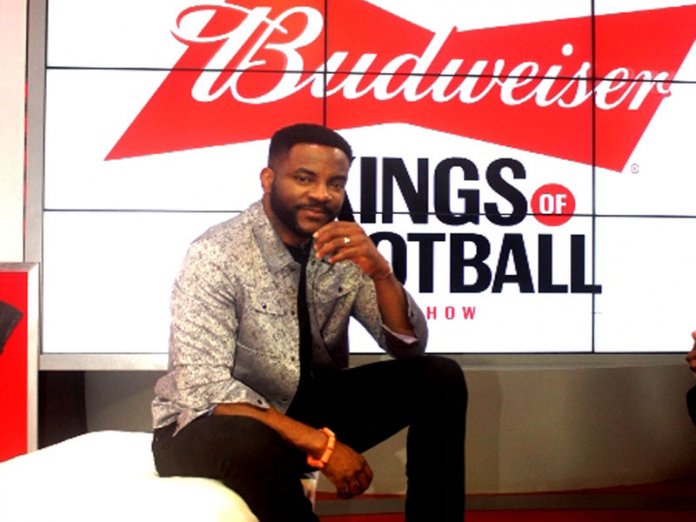 Ebuka Obi-Uchendu at Kings of Football

The new lifestyle football show ‘Kings of Football’ by Budweiser Beer brings a new life to football shows on TV with its unique style: blending music and football.

A first-of-its-kind, the one hour long show features both music and football segments to keep the viewer entertained. There is the in-house DJ Dips who spice up things with upbeat songs from his wheel of steel. And of course, the hosts Jimmie Akinsola and Osereme Inegbenebor who always challenge each other with their witty games and dance moves.

Beyond the music, there are segments such as ‘Know Your King’ where viewers can get a wink at the lives of famous football stars in either the English Premier League or LaLiga football tournament.

In ‘Kings of Style’, the show takes the viewer on a lifestyle journey of some of the famous names in the football scene. The profiling is usually focused on players from a particular region.

There are also highlights of previous matches in each episode while a new celebrity guest is featured in ‘Your Kingdom’ segment.

Celebrities such as popular DJ Crowd Controller has been featured and more recently, the Big Brother Naija host, Ebuka Obi-Uchendu who, along with, hosts of the show, showcased exciting moments in the world of football and also discussed trending topics, news and updates from the English Premier League and La Liga.

Viewers can also be part of the show through the predict and win segments ‘King of Match’ and ‘Take the Shot’. Like all football games, fans are usually frenzied when it comes to predicting the outcome of matches. This is aptly replicated in these segments where fans share their thoughts on social media and later know their fates on the show.

In addition, Budweiser has provided viewing parties in different recreational facilities across major cities in the country. Celebrities like DJ Babus, L.A.X, Hypeman Best, Dj Consequence and many others will be visiting these venues to watch EPL, La Liga matches and party with the fans of the winning teams. Fans can easily check out the weekend viewing party venues from the social media handles of Budweiser.

Speaking on the TV show, the Marketing Director, International Breweries, Tolulope Adedeji said “Footballers all over the world, including our local footballers, aspire to play in these leagues.

“Through the ‘Kings of Football’, fans and our local footballers will be able to glean some useful tips from the stories of the personal lives of their heroes, especially in the area of their value to communities and the sacrifices they made to become stars of the game. Our viewing parties also provide us the opportunity to celebrate with fans in a unique and exciting way only Budweiser can bring to life.”

The Kings of Football show and viewing parties are two of the activations by Budweiser in Nigeria to celebrate the global multi-year sponsorships with two of the top international football leagues, the English Premier League and LaLiga.

The weekly show is billed for 8:30pm every Friday on SuperSport 3 with repeat broadcast on Saturdays across Super Sport Channels.