Music synchronises the brains of performers with their audience allowing them to experience emotions together, study claimsResearchers measured the brain activity of a violinist and 16 audience membersThey found listening to music increases blood flow to certain parts of the brainThese are regions relating to processing rhythm but also social understandingMusic is more enjoyable if the musician and audience’s brains are more in sync

By Ian Randall For Mailonline

Music synchronises the brains of performers with their audience, allowing them to experience emotions together, a study has claimed.

Furthermore, the greater the synchronisation between musicians and listeners, the more enjoyable the performance is, researchers from China have concluded.

Although the study was only conducted on a limited number of participants, the findings may help us better understand how we connect with, and through, music.

Music synchronises the brains of performers with their audience, allowing them to experience emotions together, a study has claimed. Pictured, a crowd enjoys a concert (stock image)

The study was conducted by psychologist Yingying Hou of the East China Normal University in Shanghai and colleagues.

In their experiment, 16 women watched a series of pre-recorded videos — each running for around 100 seconds — of a violinist performing 12 pieces of music.

These included familiar works such as ‘Auld Lang Syne’, ‘Ave Maria’ by Franz Schubert, ‘Edelweiss’ from the Rodgers and Hammerstein musical ‘The Sound of Music’ and ‘Ode to Joy’ by Ludwig van Beethoven.

During the video-watching sessions, the team used a technique known as dual near-infrared spectroscopy to record the brain activity of the participants as they listened to the music.

They then compared these recordings with brain scans taken previously of the violinist while he was being filmed playing the pieces.

The spectroscopy technique allowed the team to track changes in brain activity by monitoring the changes in the levels of oxygenated blood in certain parts of the brain — where a greater supply of oxygen is afforded to more active neurons.

The researchers found that listening to the performances triggered increased blood flow to areas of the brain known to be associated with the interpretation of the rhythm of sounds, as well as interpersonal intentions and expression.

In particular, the popularity of the violinist’s performance appeared to be associated with the correlation of brain activity in the left temporal cortex between the audience and the musician.

This correlation was found to be stronger further into each piece — after around 50 seconds, or half of the composition, had elapsed — suggesting that it may take time for appreciation of a piece of music to develop in the brain. 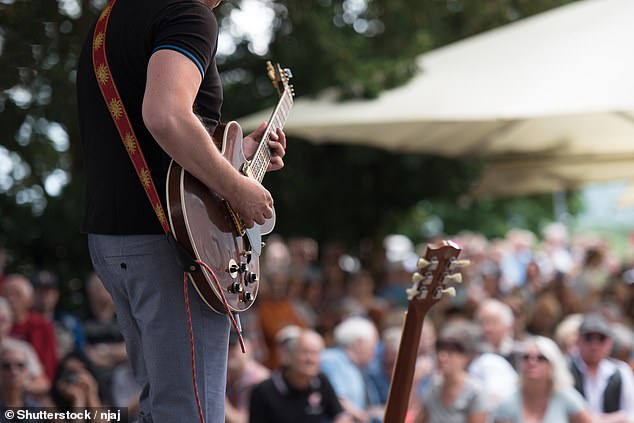 The greater the synchronisation of brain activity between musician and listeners, the more enjoyable the performance is, researchers from China have concluded (stock image)

‘These findings suggest that neural synchronisation between the audience and the performer might serve as an underlying mechanism for the positive reception of musical performance,’ the researchers concluded in their paper.

‘This study expands our understanding of music appreciation.’

The full findings of the study were published in the journal NeuroImage.

LISTENING TO MOZART CAN HELP YOU FOCUS, EXPERTS CLAIM

Listening to Mozart can significantly help to focus the mind and improve brain performance, according to research.

A study found that listening to a minuet – a specific style of classical dance music – composed by Mozart increased the ability of both young and elderly people to concentrate and complete a task.

Scientists say that the findings help to prove that music plays a crucial role in human brain development.

Researchers from Harvard University took 25 boys, aged between eight and nine as well as 25 older people aged between ages 65 to 75, and made them complete a version of a Stroop task.

The Stroop task is a famous test used to investigate a person’s mental performance and involves asking the participant to identify the colour of words.

The challenge is managing to identify the correct colour when the word spells out a different colour.

Both age groups were able to identify the correct colours quicker and with less errors when listening to the original Mozart music.

When dissonant music played, reaction times became significantly slower and there was a much higher rate or mistakes.

Scientists said that the brain’s natural dislike of dissonant music and the high success rate of the flowing, consonant (harmonious) music of Mozart indicate the important effect of music on cognitive function.

Wolfgang Amadeus Mozart’s is universally described as complex, melodically beautiful and rich in harmony and texture.

The Austrian composer, keyboard player, violinist, violist, and conductor died at the age of 35, and left behind more than 600 pieces.

Previous studies have found that his compositions provide cognitive benefits and scientists have referred to this as the ‘Mozart Effect’.