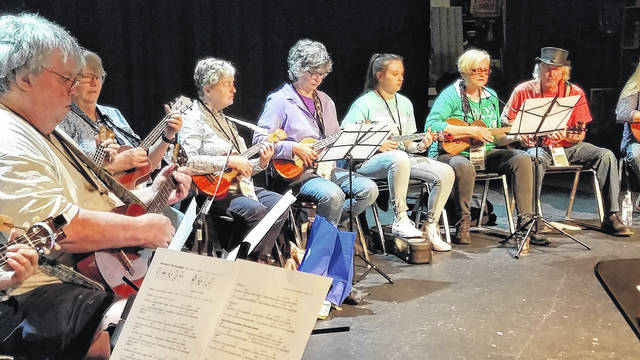 About two dozen ukulele players gathered on the stage of the Andy Griffith Playhouse Friday afternoon for one of several jam sessions to kick off the first Mount Airy Ukulele Retreat. – 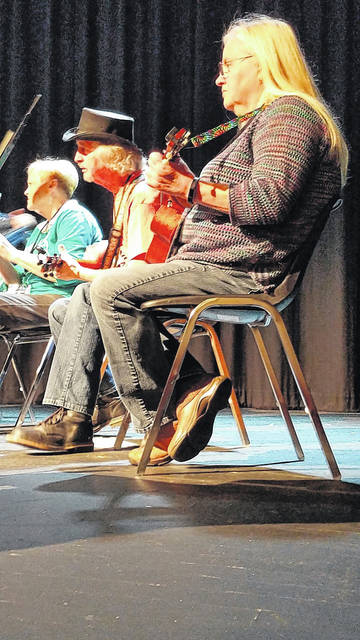 Jeanne Edwards, foreground, Chris Robb, and Penelope Mosely, all from Hillsville, Virginia, watch intently as retreat leaders George Smith and Kent Knorr lead them on some new pieces for the ukulele. – 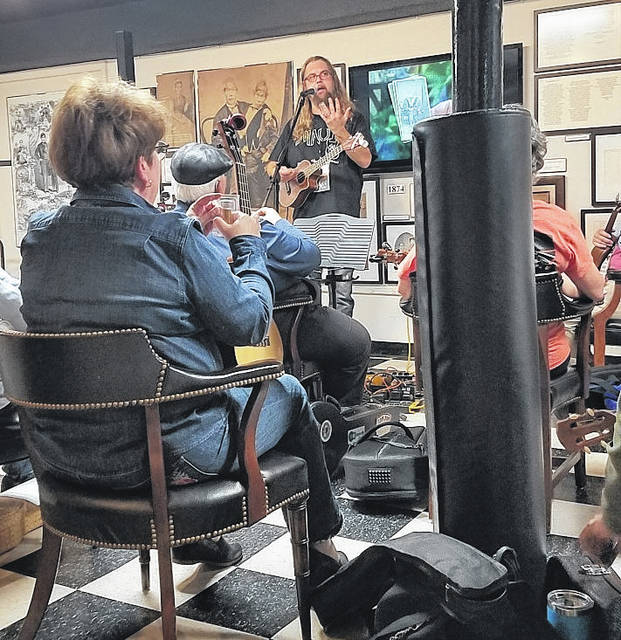 George Smith illustrates how to use different fingers for slide playing during a Saturday workshop. – 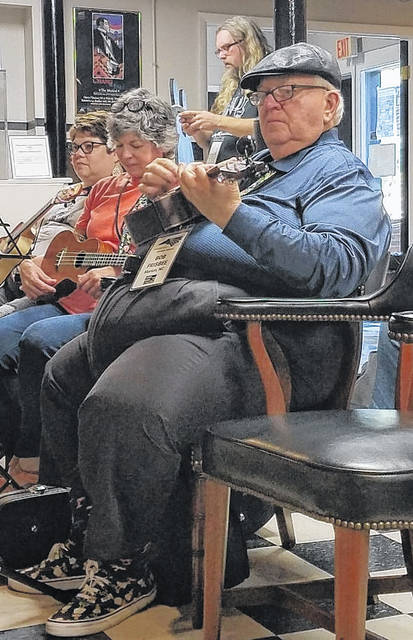 Bob Frisbee, of Marion, was one of many ukulele players who traveled to Mount Airy for the city’s first ukulele retreat. – –

There seems to be a movement of some sort afoot.

People who are perhaps a little different than they appear. They could be your neighbor, a coworker, maybe the person you walk by at the grocery store, the couple you see jogging at the park.

There’s almost no way to identify them, at least initially.

Until they pull it out, the one tool, the instrument, that shows them for what they really are — ukulele players.

And if that seems to be a bit of an overly dramatic way to describe them, think again. They really do seem to be everywhere, coming out of the veritable woodwork when given the chance.

“We started MAUI in 2013,” Smith said, explaining the impetus behind forming the group was really his wife, Gin.

“She wanted someone she and her friend, Grace, could play with,” he said. Smith, an accomplished musician who counts the guitar, mandolin, and banjo among the instruments he can play, had never touched a ukulele.

Still, his wife was persistent, so he went along, buying his first ukulele in 2013, the day he announced the group would hold its first get-together — giving himself just six short weeks to learn the instrument.

“The first song we did was ‘We Don’t Need No Education,” by Pink Floyd. “Some instant irony,” he said with a grin.

There were quite a few folks on hand to witness that irony, too.

“When we made the announcement (that the group was forming), I was hopeful six people would come. Seventeen people showed up.”

As Smith was talking Saturday, Bob Frisbee, from Marion, said his experience has been the same. He’s a ukulele player who helped start a group in his town in August. “I hoped we’d have five or six,” he said. “We had 20. It was supposed to meet every month, now they want to start meeting weekly.”

Mary Hill, from Saint Pauls, near Fayetteville, said her experience has been similar. She recently started a ukulele group in her town, hoping to find if there were any other players nearby.

Ten people turned up for the first meeting.

“One of them said ‘where have you been? I thought I was going to have to start a group to find anyone else.’”

Both Hill and Frisbee made their comments in town this weekend for a Ukulele convention.

That’s right — a convention. The first, and planned to be annual, Mount Airy Ukulele Retreat, sponsored by the Surry Arts Council. In this community, known far and wide for the sometimes mournful, often melancholy sound of bluegrass and old-time music which originated here, 100 musicians spent the weekend playing the whimsical, cheerful ukulele.

Smith, who also oversees The Granite City Rock Orchestra and teaches at Old Mill Music, was one of several musicians overseeing this weekend’s event, running workshops, teaching specific techniques to ukulele players of all skill levels. He was joined by two-time Grammy Award winning musicians Cathy Fink and Marcy Marxer, along with Kent Knorr from the North Carolina Ukulele Academy in Wilmington, as instructors for the three-day gathering.

While Smith might be a well-known musician, even the face of the local ukulele movement, he credits another area resident, Jody Crawford, for the retreat.

Crawford said a few years ago she and a friend attended a ukulele festival in Richmond, Virginia, which got her to thinking about doing the same in Mount Airy.

“I knew we had those who played here, so I thought we should have one.”

Checking into the logistics, Crawford said she quickly figured out the expense was beyond her means.

She contacted Cathy Fink, one of the instructors for the retreat, who in turn reached out to Surry Arts Council Executive Director Tanya Jones. The council submitted a few grant applications and next thing everyone knew, Mount Airy had a ukulele retreat.

Exactly 100 ukulele players signed up and were in attendance over the weekend — the number likely would have been larger, but the arts council had to cap the number at that figure because of space concerns.

Among the 100 were plenty of local musicians, including a contingent from the Hillsville, Virginia, area, who regularly make the drive down the mountain to participate in the MAUI practices and concerts.

But the convention’s ranks included folks from much further away.

“I flew in Thursday,” said Amy Stephen of Muskogee, Oklahoma.

Stephen admitted that she might not have come that far just for the retreat — she’s mom to Mary Hill of Saint Pauls — so she’s visiting her daughter and attending the retreat.

“But my other kids, the grand kids, they don’t get to see me this time,” she said with a laugh. “I am here with my daughter for the retreat.”

A trip she said she plans to repeat next year if there is a second Mount Airy Ukulele Retreat. Soon afterward, organizers indicated Stephen should be making her plane reservations now, because there will be a second retreat, Oct. 23-Oct. 25, next year.

This year’s event started off with a couple of playful jam sessions Friday, with the energetic Smith encouraging the ukulele players to “find your inner funk,” while they played a selection of tunes, with Smith and Knorr taking turns singing as they played.

Saturday morning some of the more advanced musicians spent a little more than an hour rehearsing together, then they were featured on the Merry-Go-Round, WPAQ’s weekly live broadcast from the Historic Earle Theatre in Mount Airy. Outside of that, the three-day event has been focused on workshops, where students and players can get small-class interactions with those leading the event.

Finger-picking, improvising solos, and chord melodies are among the subjects covered, as were the techniques for playing various styles of music, from country, rock, and blues, to what they called “island-style jammin’.”

No matter the subject matter, there seemed to be one driving force behind everyone at the retreat — having fun, regardless of skill level.

“If you’re playing the violin, and you’re not very good, you don’t play for anyone else,” Smith said. “The ukulele is a very forgiving instrument. If you’re not playing well, it’s all good.”

“That’s one thing about playing the ukulele,” Frisbee, of Marion, said. “You’ll never find anyone who plays the ukulele who doesn’t smile.”

And perhaps that’s the key to the instrument’s growing popularity — its ability to induce joy, which was in abundant supply over the weekend.

About two dozen ukulele players gathered on the stage of the Andy Griffith Playhouse Friday afternoon for one of several jam sessions to kick off the first Mount Airy Ukulele Retreat.

Jeanne Edwards, foreground, Chris Robb, and Penelope Mosely, all from Hillsville, Virginia, watch intently as retreat leaders George Smith and Kent Knorr lead them on some new pieces for the ukulele.

George Smith illustrates how to use different fingers for slide playing during a Saturday workshop.

Bob Frisbee, of Marion, was one of many ukulele players who traveled to Mount Airy for the city’s first ukulele retreat.