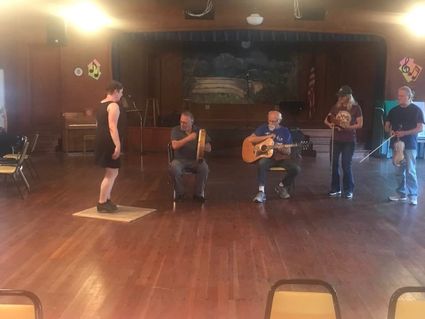 Have you ever had an experience that you felt was surreal like a dream, but you are awake and conscious? That was my experience this past Saturday. It really started last week when the editor asked me if I wanted to cover a story about the ceili musicians staying at Skamokawa Vista Park. This group came from the Portland metro area to play and dance at Vista Park, Duffy’s Irish Pub, and Skamokawa Grange #425.

I initially thought I would go to Duffy’s and take some pics and do a story, but I met Nancy Jarrell and Maldon Meehan who gave me more information as to their purpose for doing what they do. They invited me to Vista Park and to the Grange potluck and gathering on Saturday. It was amazing to see all the various tents and RVs at Vista Park of which approximately 40 people from the Portland metro area stayed there from Friday night until Sunday afternoon. I spent so much time with these wonderful people over a few days that by the time everyone gathered to eat and listen to music, it began to feel more like a family reunion. The music only added to the surrealism with steady rhythm filling the air with joy. I really felt I was in an Irish dream.

This group of friends represents the Mícheál Ó Domhnaill Oregon Branch of Comhaltas, a name they chose to honor the late singer, guitar player and Gaelic speaker who contributed so much to the preservation and growth of traditional music and culture in Portland. Their goal in organizing this branch is to keep those traditions alive; in particular, to bond the music to the dance, and in particular set dancing, the most popular form of traditional social dance in Ireland.

The organization was first formed in Portland in 1959, and the Gaelic name Comhaltas Ceoltoiri Eireann can be loosely translated as Irish gathering for music and dance. The Mícheál Ó Domhnaill Oregon Branch is a non-profit organization and one of over 400 branches worldwide. They do not have any religious affiliations and are open to people of all backgrounds. To contact the Mícheál Ó Domhnaill Branch of Comhaltas Ceoltóirí Éireann, you can also send them an email directly to [email protected]