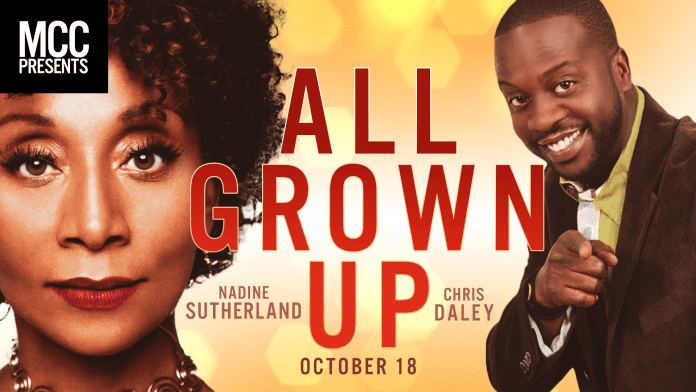 MIRAMAR, Florida – December 13 will mark 40 years since then “little” Nadine Sutherland came to prominence, winning the first Tastee Talent Contest back in 1979 with her vocal skills. The accomplished artist plans a year-long celebration, which will begin on Friday, October 18 at the Miramar Cultural Center when she performs “All Grown Up” with the Code Red Band.

Another former child star, Chris “Johnny” Daley, will share the stage with Sutherland, making for an exceptional evening of music and comedy.

After winning the Tastee Talent Contest, Nadine immediately became the first artist signed by Bob Marley to his Tuff Gong label, recording “Starvation on the Land” at age eleven. Her career blossomed, as she grew to become one of the top female singers in reggae with a solid catalog of hits. Over the years she has recorded major hits including: “Action” with Terror Fabulous, “Wicked Dickie” with Buju Banton, “Babyface” and “Big Tingz”.

Nadine plans to deliver a special show in Miramar, drawing on her roots with reggae, dancehall and expanding into a few popular R&B ballads to include some jazz classics. “I’m extremely excited to be performing at this show with Christopher ‘Johnny’ Daley,” stated Nadine, as she beamed with pride. “Throughout the years, the people of South Florida has always shown me kindness, they have been very consistent in their support. So, it’s appropriate to commence my fortieth-year celebration there. Looking forward to a special and delightful evening.”

Chris “Johnny” Daley is guaranteed to deliver a DROP OUT YOUR SEAT comedy set, to start the night.

Daley grew up in the public’s eyes on the Jamaican television program “Lime Tree Lane”. He has excelled at his craft as an actor, by appearing in numerous plays, movies, television commercials and continues to hone his craft as a successful standup comedian. His weekly show “Johnny Live” has been drawing packed houses on a regular basis in Jamaica.

Hosted by Miramar Commissioner Maxwell Chambers, the show is part of the Miramar Cultural Center’s 2019-2020 season of artistic presentations, produced in association with Riddims Marketing, Inc.

Tickets for “All Grown UP” are available online at www.miramarculturalcenter.org as well as at the Miramar Cultural Center Box office.