James Brown’s performance at the Mimicombo Roller Rink in 1965. The Rolling Stone’s surprise 1997 gig at El Mocambo. The Notorious B.I.G.’s one and only Toronto show that was shut down within 20 minutes.

These are just some of the iconic music moments found in a new book called The Flyer Vault: 150 Years of Toronto Concert History by Daniel Tate and Rob Bowman. It features dozens of pages of show flyers and hundreds of concert stories, some dating back to pre-Confederation.

“It gives people of any age group a sense of how rich and vibrant this city’s cultural life always has been,” said Bowman, a Grammy-winning music professor at York University. “We’re incredibly lucky musically and apparently have been since 1840.”

The idea to share Toronto concert flyers came to Tate in 2015 after he rediscovered a box kept at his parent’s home. Inside were over 3,000 music flyers and posters he had collected in the 1990s and 2000s while going to raves and working with R&B and hip hop promoter R.E.M.G.

It was a time when most people found out about shows from radio or newspaper ads, and Tate was part of a street team handing out flyers to late night partygoers.

“This trunk of flyers was like a time capsule for a special period of time in Toronto nightlife,” said Tate, who now works in IT. “I realized that there’s all this nostalgia, this wave of memories and stories that were on these pieces of paper.”

Daniel Tate rummages through the thousands of flyers he collected from his days as an R&B and hip hop concert promoter in the 1990s and 2000. (Paul Borkwood/CBC)

He started scanning and uploading images to an Instagram account called @theflyervault. Its following soon grew, and many people started offering their own concert stories and flyers.

Around the same time, Tate arranged a meeting with Bowman to inquire about some musical history: funk icon George Clinton’s life in Toronto. He soon realized they were “kindred spirits when it came to music” and when he showed Bowman his flyer collection, they envisioned putting a book together of Toronto’s concert history.

What started with posters from Tate’s personal collection — including treasured ones of Eminem’s debut performance in 1999 at the Opera House and Biggie’s 1995 show at the Apollo — expanded into a search for flyers from various decades and genres.

“I had to move mountains to get a lot of this stuff,” said Tate. “I was even prepared to drive to New York state.”

One of the hardest flyers to track down was from the Beastie Boys’ midnight show at the Twilight Zone from 1985. Someone told Tate there was a copy of it in a glass case at Cornell University. He was ready to make the drive. Thankfully he soon discovered that Ron Nelson, commonly known as the godfather of Toronto hip hop, had one to share. 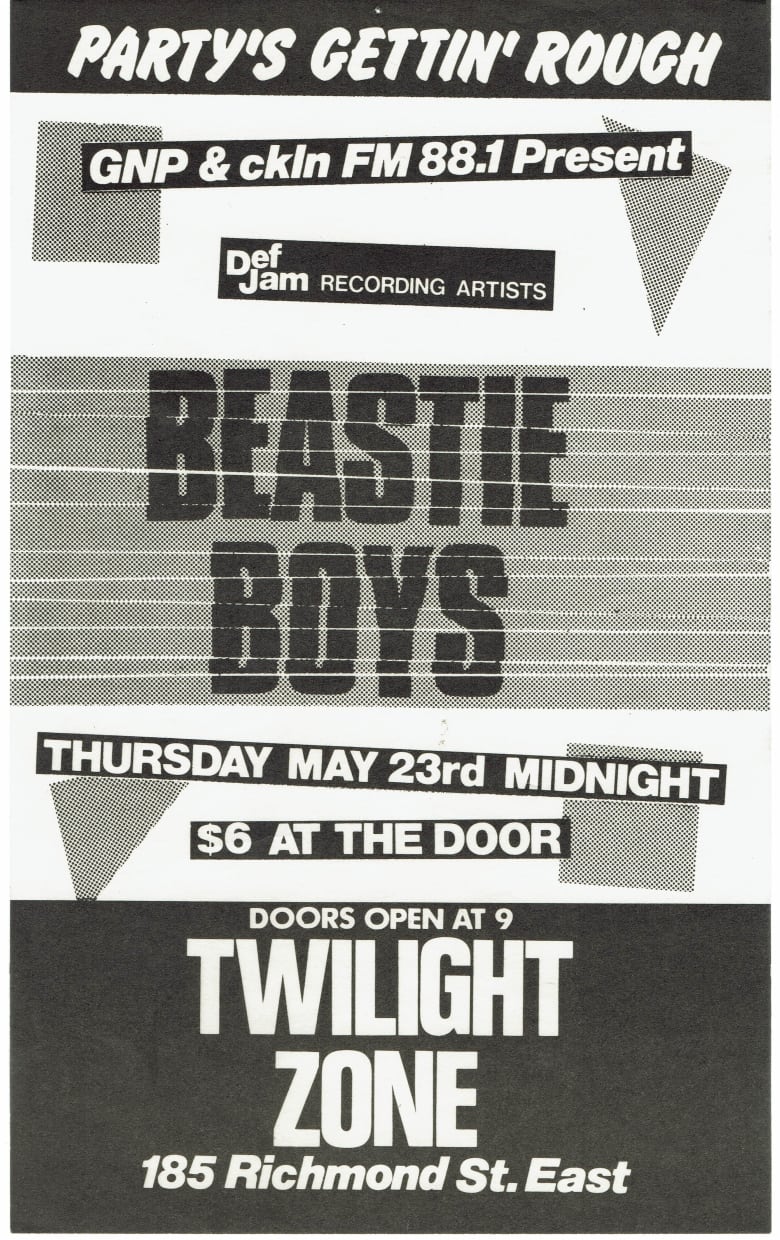 The Beastie Boys performed at the Twilight Zone in on May 23, 1985. Earlier that evening, the NYC trio had opened for Madonna’s Virgin Tour at Maple Leaf Gardens for a crowd of 18,000 predominantly female audience. (The Flyer Vault)

Tate and Bowman also spent countless hours digging through libraries and archives in the city. They unearthed posters ranging from jubilee singers in the 19th and 20th centuries to ones featuring what were then relatively unknown bands — like Nirvana playing for a crowd of around 100 people at Lee’s Palace in April of 1990.

The authors also delved into locations that played a key role in Toronto’s concert history, and commissioned Toronto artist Dave Murray to create a word map of old and current music venues in the city.

“It’s a really vast, eye-opening map,” said Tate. “It was important to me to have some sort of visual representation of all the legendary live music venues and clubs that dotted the landscape in Toronto.”

Toronto illustrator Dave Murray created this map of former and current music venues that have been graced by legendary performances. (The Flyer Vault)

“We have an extraordinary number [of venues], long before our time too. Ones that we didn’t even know about, let alone ones that I experienced and Daniel experienced,” Bowman said.

For Tate, he’s particularly disappointed by the closure of the Guvernment. The complex, which faced the lakefront at Queen’s Quay East and Jarvis, was demolished in 2015 for a condominium development.

“Personally that one hits close to home because I spent a lot of time at Government either in a working capacity or as a fan and I live close there,” he said.

Bowman and Tate think their book will appeal to different generations. They said it was a tough process deciding which flyers made the cut, but tried to include shows that were important to the music history and landscape of the city.

“Maybe there will be a second book,” said Tate.