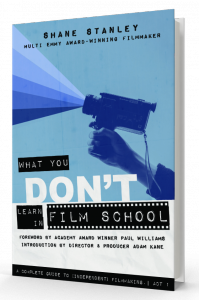 A Complete Guide to (Independent) Filmmaking

LOS ANGELES, CA, USA, January 24, 2018 — Multi Emmy Award-winning filmmaker Shane Stanley (Gridiron Gang, The Untold Story) is releasing “What You Don’t Learn in Film School: A Complete Guide to (Independent) Filmmaking”, a no holds barred, transparent look at making movies from concept to delivery, a compilation of his 30 plus years of producing films at both the studio and independent level.

Stanley, who spends time between productions speaking at film schools across the country, sees a trend in what many students aren’t being taught. “It’s not the lack of curriculum or inept educators,” he says “…it’s the fact there’s only so much you can teach in the classroom and it isn’t until these students go out into the world that they realize how much they really don’t know. It’s overwhelming and often discouraging forcing many recent grads to throw in the towel and seek alternative career paths.”

It’s evident that Stanley is trying to help bridge the gap between the classroom and real life by giving the next generation of filmmakers as much ammunition as possible before they venture out into Hollywood. But this book isn’t just for students – it’s for anyone trying to carve out a career in the film or television industry. Stanley, a two-time Emmy Award winner and four-time nominee before the age of 18, notes “…it’s what happened between then and now that has shaped me into who I am. I didn’t have a roadmap. I learned by trial and a lot of error, and God knows I made tons of avoidable mistakes.”

The ammunition in this tell-all comes from Stanley’s hands-on experience and pulls no punches when covering topics such as choosing what material to produce, raising independent capital, hiring a production crew and selecting the right cast to get the most bang for your buck in the worldwide marketplace. The chapter, Sales & Deception, tears the lid off many myths surrounding today’s distribution platforms and opens the reader’s eyes to walk a maze of sales traps and vague promises.

Stanley’s book is quickly being embraced by film schools across the country and anticipated to make itself onto many curricula’s of well-respected universities. The foreword is written by Oscar, Golden Globe and Grammy Award winner, Paul Williams (Phantom of the Paradise, Evergreen) and the introduction by one of the most sought after directors in Hollywood, Adam Kane (Damnation, Star Trek: Discovery and American Gods). The book has already received praise from industry heavyweights such as Neal Moritz (The Fast & Furious franchise, S.W.A.T., 21 & 22 Jump Street), Jeff Sagansky (former President of SONY Entertainment and CBS Studios), two time Golden Globe-winning actress/producer Jane Seymour and New York Times best-selling author, James Riordan (Stone: The Controversies, Excesses and Exploits of a Radical Filmmaker and The Platinum Rainbow: How to Succeed in the Music Business…without Selling Your Soul).

The book will be available exclusively for preorder on Amazon for $8.99 until January 30th then at all major retailers in both eBook or paperback.

For more information go to: www.whatyoudontlearninfilmschool.com