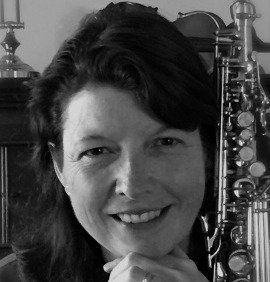 Saxophonist, vocalist and composer Patricia Wheeler, whose musical education began in Meaford with teachers Ron Knight and Charlie Strimas, will perform with her Jazz Quartet on Sunday, August 18, from 3-5pm at Christ Church Anglican, 35 Boucher Street.

The group includes popular Toronto guitarist and noted Phil Nimmons scholar Mike Cadó, Canadian jazz mainstay Pat Collins on bass, and Beafheart Project Toronto drummer Gord Fynes. The band will play Wheeler’s arrangements of such standards as “You Stepped Out of a Dream”, as well as material from the Beatles catalogue, a very rare Henry Mancini composition entitled “Brunette in Yellow”, and four original compositions by the leader herself.

“I wanted to do something very special for this performance, as the education I received from both Mr. Knight and Mr. Strimas – who is the musical director at CCA – figures so strongly in my musical DNA,” said Wheeler. “I thought if I were to do a ‘world premier’, so to speak, of my newest compositions, I would put together a band that can turn on a dime and bring the whole thing to Meaford.”

Vocalist Mary Lou Sicoly, who is a multiple Juno Award nominee, is also going to sing a number with us. It won’t be two hours of ‘spangalang’ drumming and walking bass; we might shake the rafters a little, but I think folks are really going to dig it – fun, engaging music.”

Admission to the concert is by free-will donation, with proceeds going toward the maintenance of the church’s historic pipe organ and baby grand piano.